Today’s flight would take us as far as we could go along the southern border before hitting restricted air space. Our first stop was Nogales, for fuel. As we flew along the border we could see imposing fencing along much of it; and the harsh terrain would surely be a difficult barrier in itself. 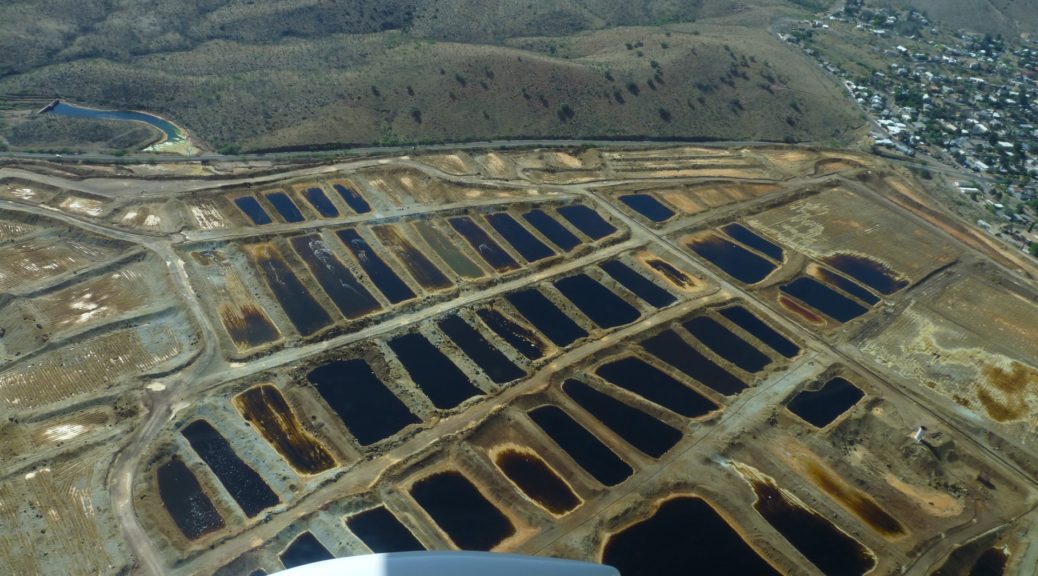 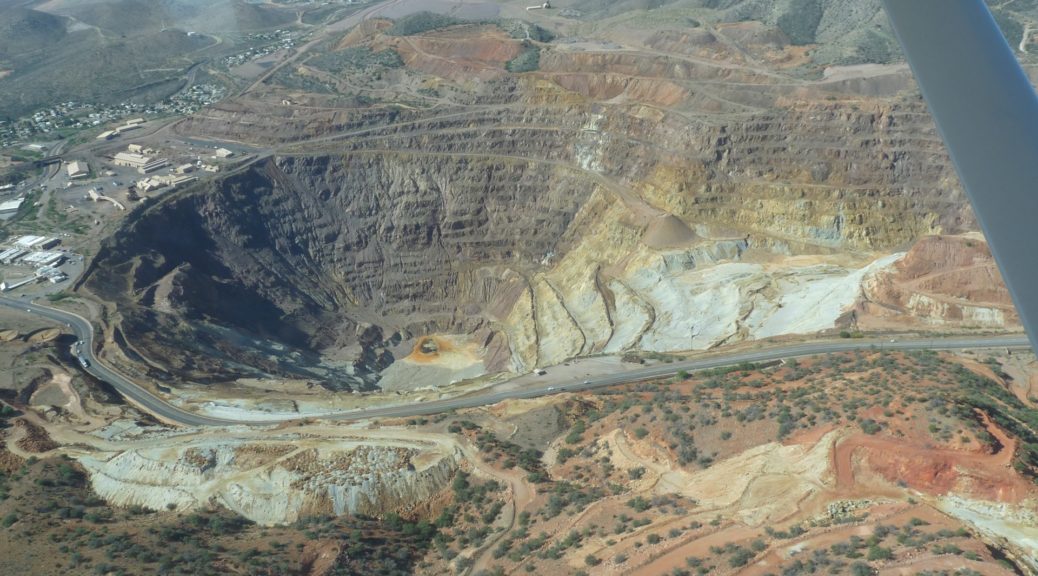 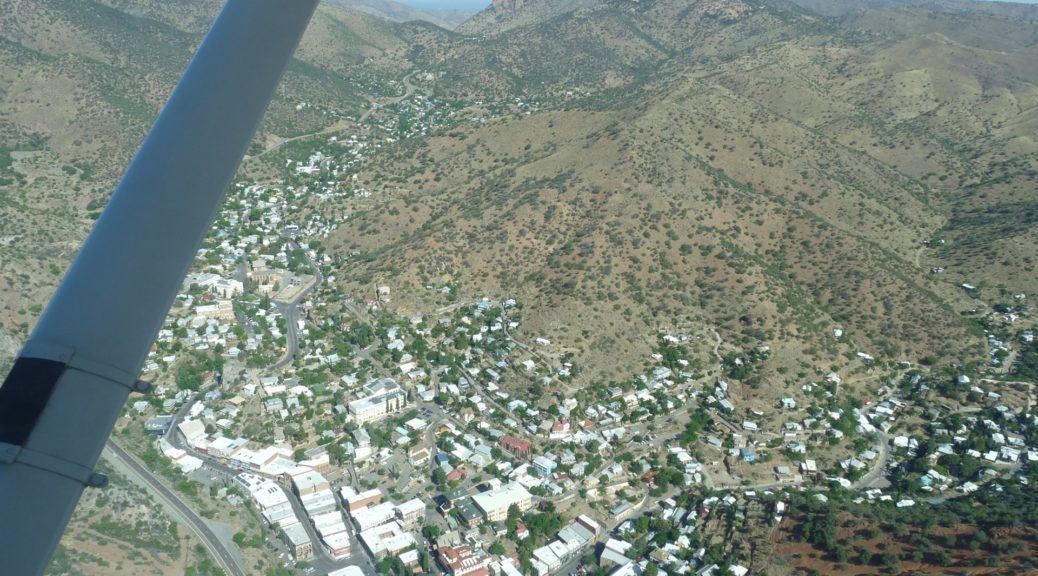 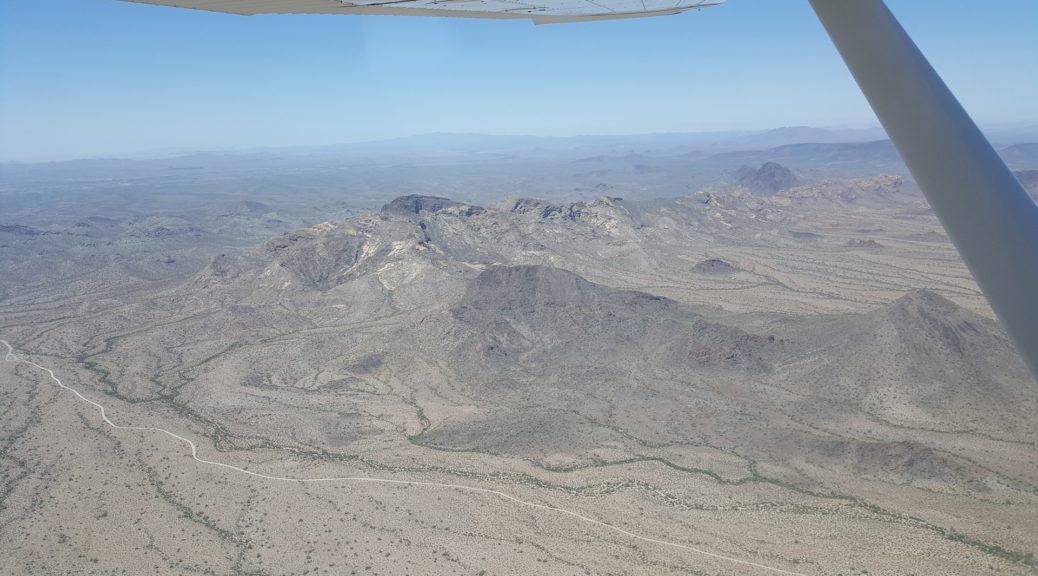 Nogales turned out to be a rather strange airport; the FBO seemed to dedicate most of it’s attention to flight training for foreign students, and was very busy with instructors and their pupils buzzing around. We did finally manage to talk to someone to buy some oil, and get some advice on the best way to get around the impending restricted zones. They didn’t seem very interested in transient traffic. 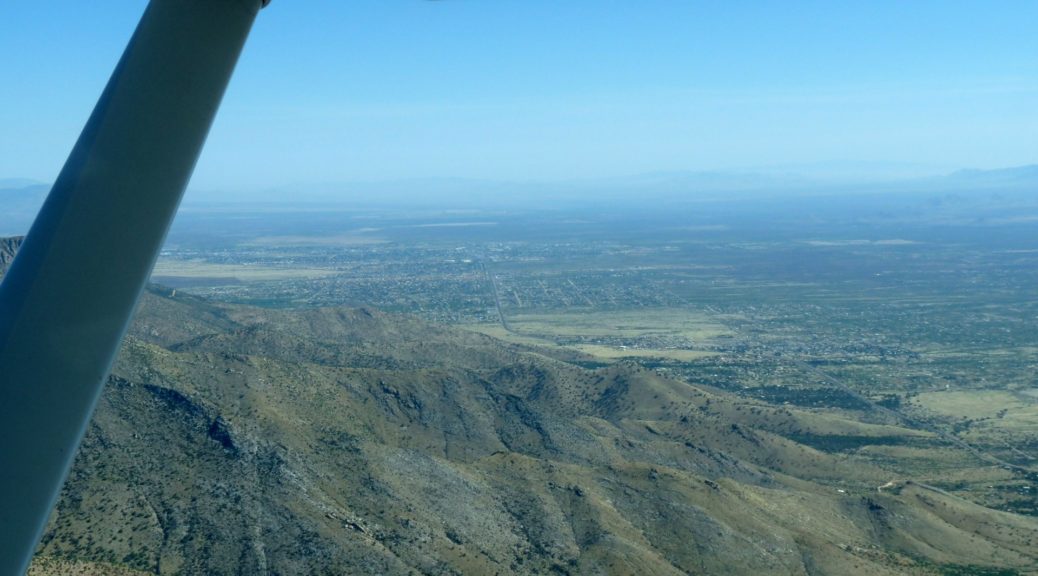 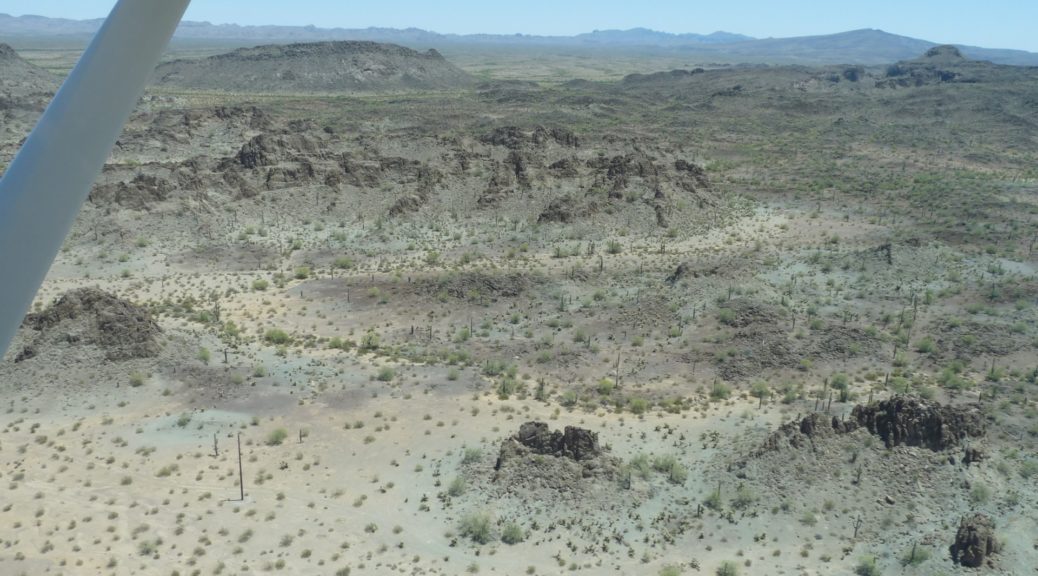 We left Nogales without regret and continued tracking the border as far as the Organ Pipe Cactus National Monument. This covers more than 330,000 acres, and is the only place that the Organ Pipe Cactus grows. We flew a little above the minimum allowed altitude for the monument and indeed, plenty of these impressive looking cacti were visible! We landed at Ajo, just north of the monument, to have lunch and hopefully find a cactus or two to see from the ground. 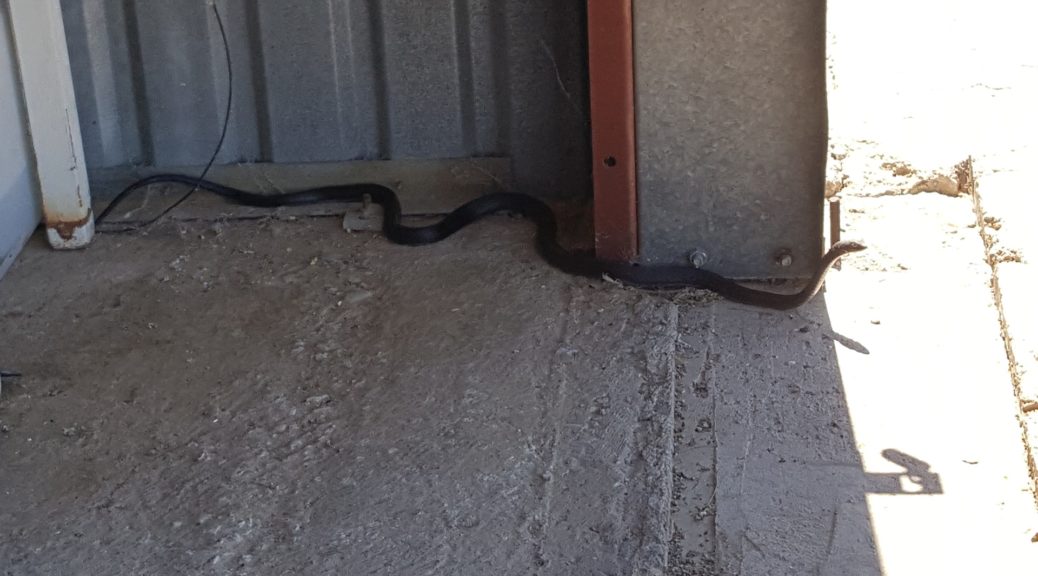 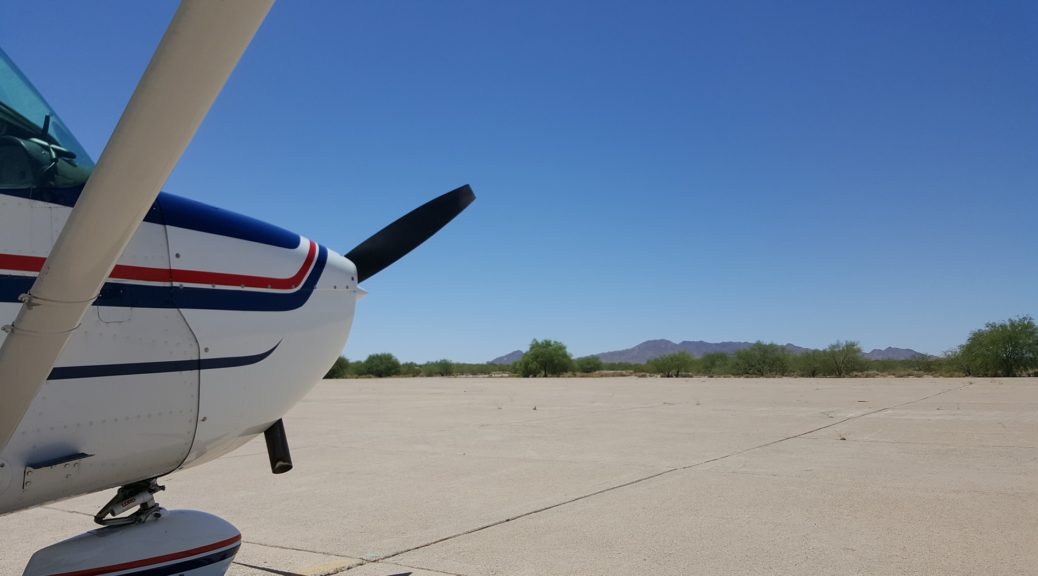 The view from lunch at Ajo

One of the nearby hangars was open, with a gentleman pottering around inside. We wandered over to say hello and found that he was gently trying to evict a large black snake that had taken up residence behind his refrigerator. He chatted to us a little about the history of the airfield, which used to have a military base attached, and suggested where we might be able to see a cactus or two, so we set off walking in line with his directions. The sun was scorching hot, so we were happy to quickly find a couple of fine specimens. One had a bird nesting inside it! 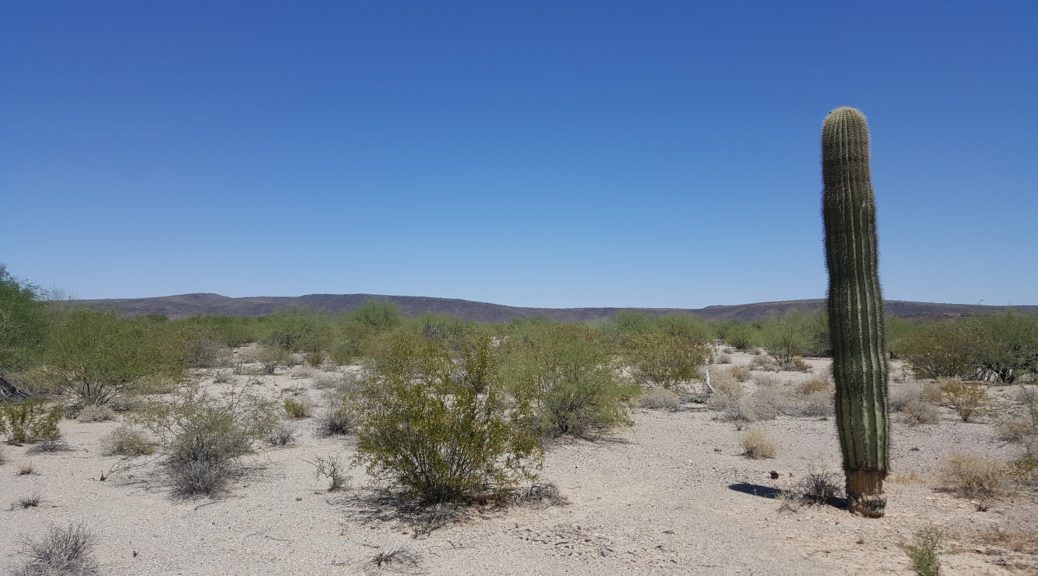 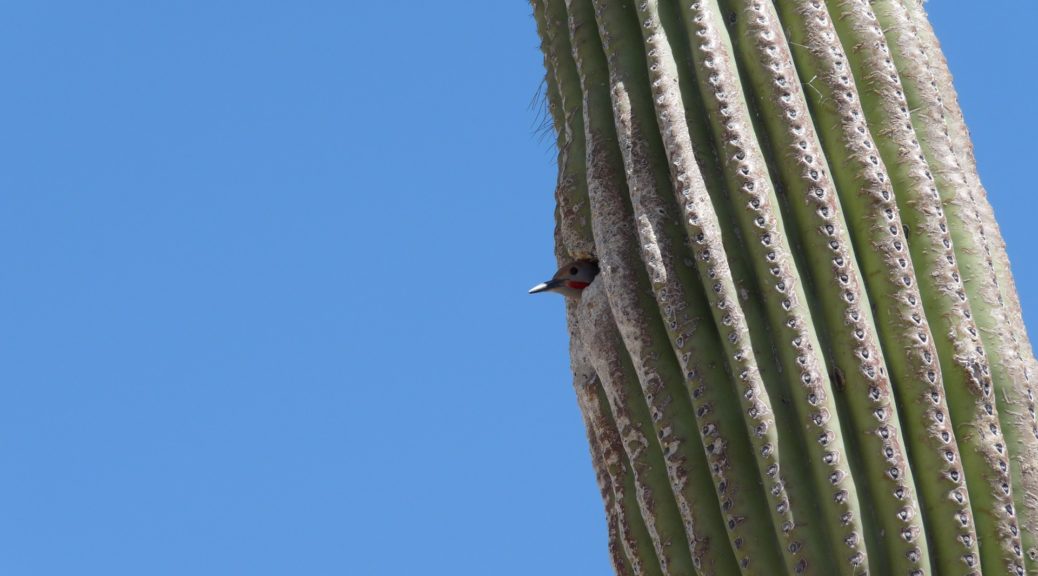 We set up the chairs and cooler in the shade of the wing (another benefit of high-wing aircraft!) and made some sandwiches for lunch. This done, we saddled up and launched for the short flight to Gila Bend Municipal airport. This would involve flying through a restricted corridor, running between two large restricted areas. We had done our homework, and knew the procedure for what would turn out to be one of my best flying experiences to date.

We circled overhead the airport until we were high enough to make radio contact with the military controller at the Gila Bend Auxiliary Air Force base, at the northern end of the corridor; with the amazingly cool call-sign of “Snake Eye”. We requested transit and he then gave me one of my favourite ever clearances; “You are cleared to enter the restricted area, follow the highway north, do not fly *above* 500ft.” 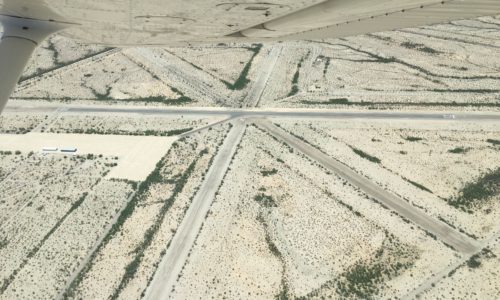 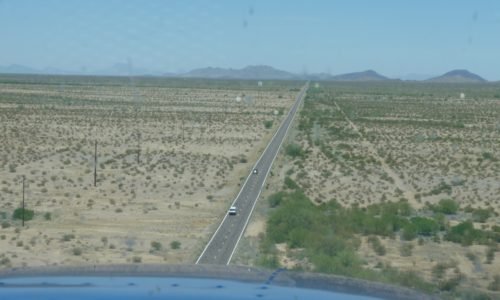 Low level through the restricted area 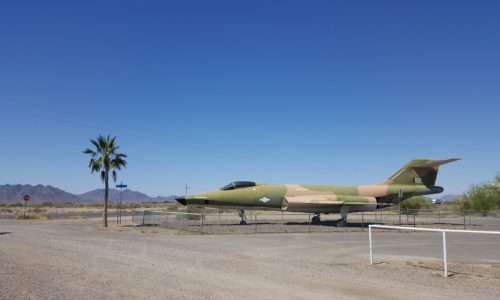 Thus officially cleared to buzz cars on the highway (I joke, of course…) we zoomed at low level north towards Gila Bend. It was tremendous fun, although Sophia suffered a little from the bumps at low altitude. Gila Bend Municipal was deserted, so we filled up at the self serve and checked out the old military aircraft at the gate. We took the time to check out the flight guides and plan our next moves, settling on a plan to fly to Yuma next. This was primarily because they had a very fancy new FBO, with shower facilities! 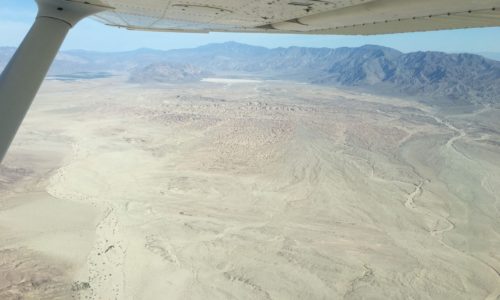 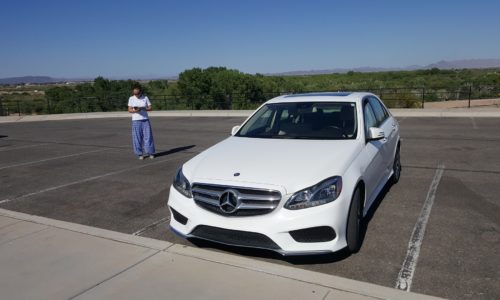 Our lovely crew car in Yuma 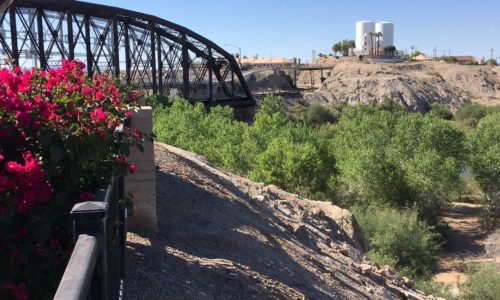 The FBO was every bit as fancy as expected, to the extent that they even had a Mercedes crew car. We borrowed it for a while, and went to see the Yuma Territorial Prison State Historic Park. Opened while Arizona was still a U.S. territory, the prison accepted its first inmate on July 1, 1876. For the next 33 years 3,069 prisoners, including 29 women, served sentences there for crimes ranging from murder to polygamy. The prison was under continuous construction with labor provided by the prisoners. In 1909, the last prisoner left the Territorial Prison and for the next four years it was occupied by Yuma Union High School (who presumably were able to come and go rather more freely). 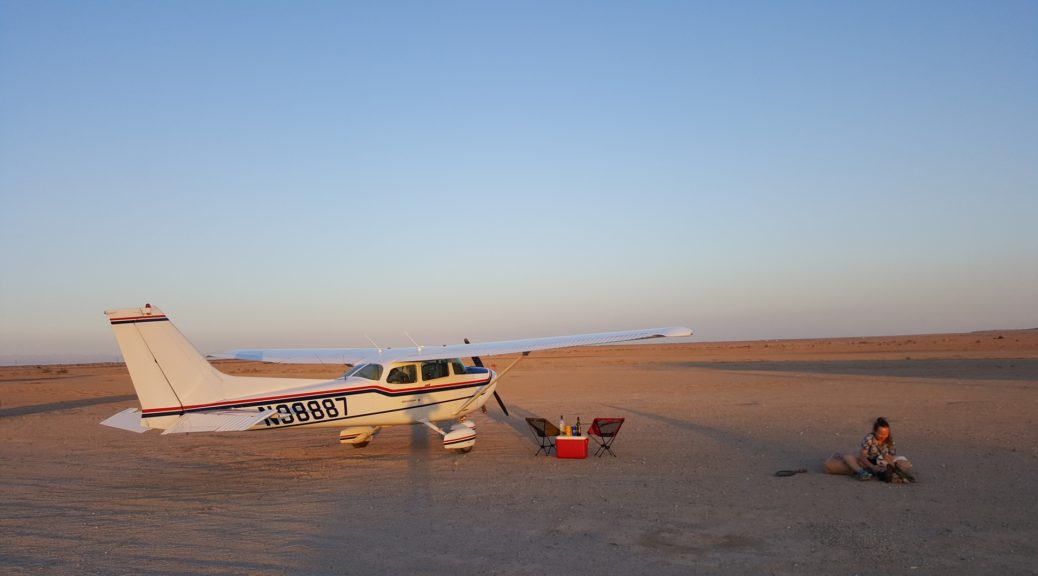 Sophia works to get the fire going 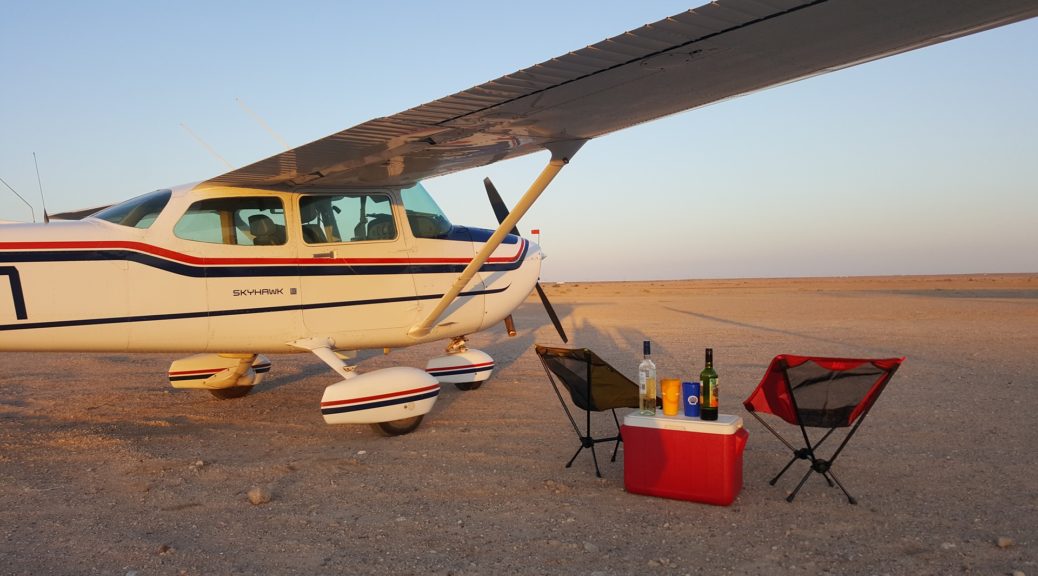 Ready to relax with dinner and a glass of wine

We left Yuma, and soon crossed into Southern California. We landed for the night on the dirt strip at the Salton Sea. The lake surface is 236 feet below sea level and it is, unsurprisingly, an inland sea with no outlet. It exists periodically, drying up and then being refilled over a cycle of centuries. The most recent filling happened accidentally in 1905 when engineers of the California Development Company accidentally released the Colorado River into the basin; it flowed for two years before repairs were completed. The sea is highly saline and gathers all pollutants and runoff, and has a rather unique smell, which is not necessarily enjoyable.

We set up our chairs and cooler under the wing again, and enjoyed our fire-cooked dinner with chilled wine as we watched the sunset.