The time for returning to work was drawing painfully near. Before parking up the airplane for a month, it was important to take care of some routine maintenance. I organised, through the very helpful Liz of the Flyer Forum, to take the aircraft the 8 miles over to Headcorn and meet “Big Jon”, who had very kindly volunteered to give up a few hours of his holiday weekend to help me out. I had all the tools and materials I needed to change the oil and filter, as well as service the spark plugs, with the exception of a sand-blaster for cleaning the plugs. Not very practical to carry one of those with me!

The flight from Laddingford was, of course, over very quickly. Headcorn is a beautiful grass airfield, that’s very welcoming to the public; on a sunny holiday like today, the grass parking area was full of families picnicking and watching airplanes come and go. The radio operator had been forewarned of my arrival and gave me directions straight to the maintenance hangar; I parked on the grass outside and Jon met me as I shut down the engine. We jumped straight in and soon had the cowls off, the oil drained, and the spark plugs pulled. Everything looked great, so we took care of the work, ran up the engine to double check everything, and then got the cowls back in place. 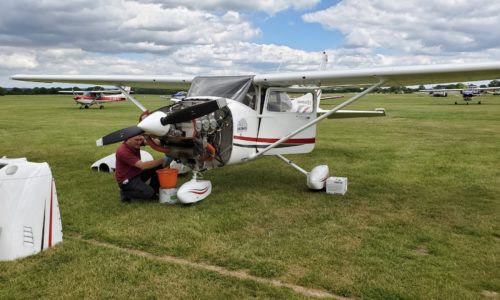 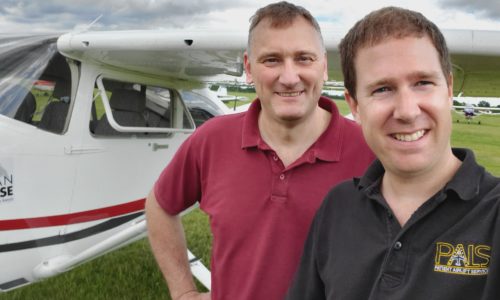 With Jon at Headcorn 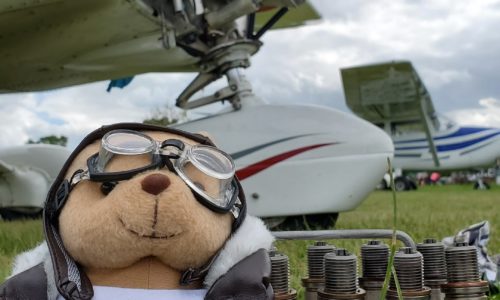 I said goodbye to Jon, and before departing I filled up with AVGAS ready for my flights out of the UK in a few days. The radio operator, who also took care of payments, waived the landing fee and told me he thought I had the dubious honour of uplifting more fuel than any other civil aircraft had at Headcorn, large historical ones excluded. 294 litres this time! I really missed US fuel prices; the one consolation is that the UK allows a pilot to claim back fuel duty on any fuel uplifted in the UK and then exported. With my tank sizes, that adds up.

My flight out of Amsterdam was at 10pm on Thursday, so on Wednesday morning I set out from Laddingford. While I’d be finishing my day in Rotterdam, I first had an appointment with a gentleman called Joachim in Kassel. I had liked the Avidyne IFD440 GPS that I put into the aircraft enough that I’d decided to upgrade to the larger Avidyne IFD540, and Joachim was looking to buy the old one. 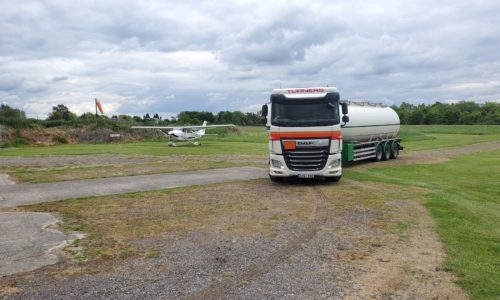 An AVGAS delivery at Laddingford 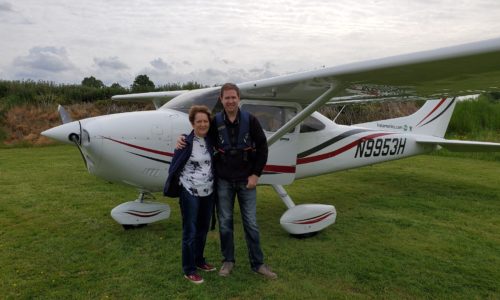 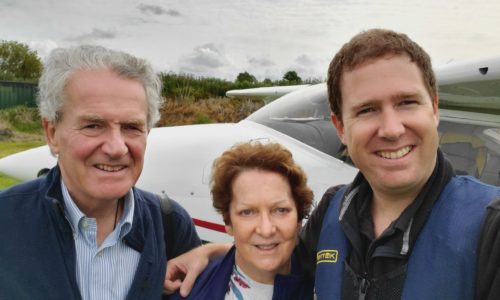 A positive feature of flying in the UK is that one can depart from the country from anywhere; it doesn’t have to be an airport with customs and immigration, as in most other countries. I therefore took off out of Laddingford and headed east, opening my IFR flight plan through London Information. I had spent some time the day before figuring out an acceptable route using Autorouter, and managed to find one that didn’t take me too far out away from the direct routing. As I coasted out near Dover at 10,000 feet, I could already clearly see the coasts of France, and then Belgium, ahead of me. Conditions were smooth, so I enabled the autopilot and relaxed as I cruised across the length of Belgium, passing overhead Brussels as I went. A left turn took me over Koln, and up towards Kassel. ATC assigned me the ILS approach for runway 22, with the full procedure taking me on a loop around the north of the airport and back in to land. 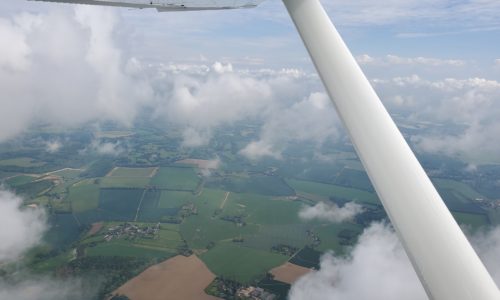 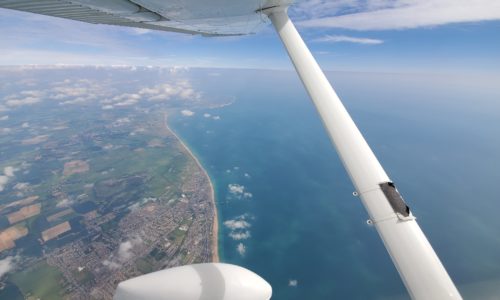 Coasting out north of Dover 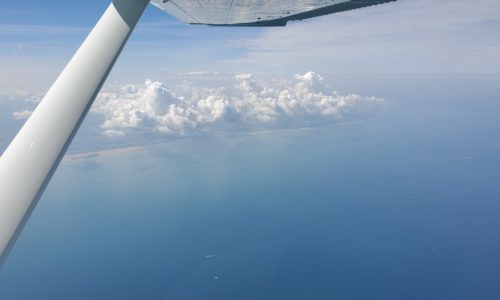 Across the English Channel; or is it the North Sea at this point? 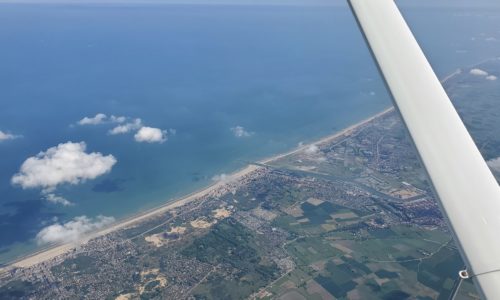 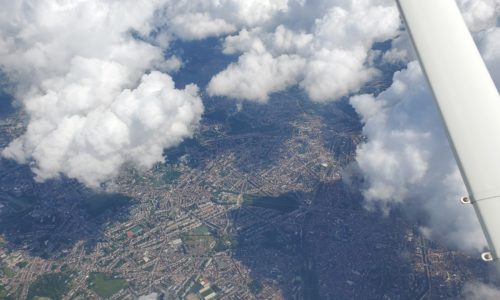 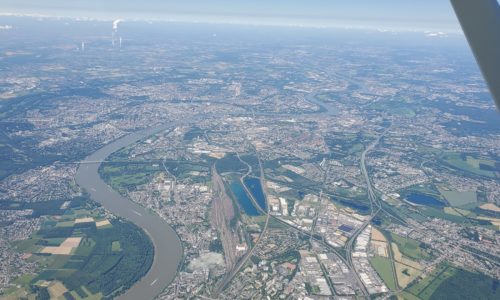 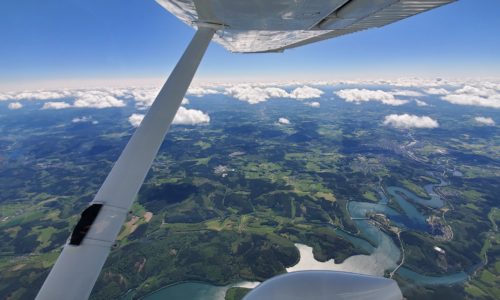 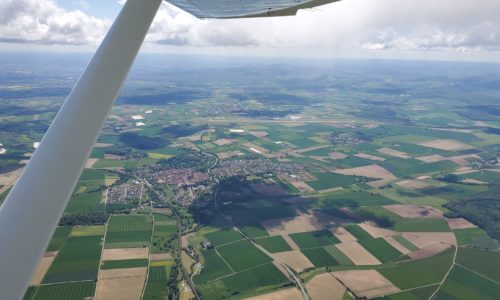 Flying the ILS procedure to Kassel

Kassel has a very pleasant looking airport cafe attached to the GA terminal; but sadly it seems to have closed down. I sat somewhat hungry for a while and waited for Joachim and his friend to arrive in their Cirrus SR22, which they did right on schedule. Joachim’s friend was also the avionics tech who’d be installing the new GPS, and they gave the unit a quick once-over before declaring themselves happy and concluding the deal. I had filed an IFR flight plan once again, for the trip back towards the Netherlands, but due to ATC lack of staffing there was a 30 minute delay before I’d be allowed to depart. Not an issue I have ever encountered elsewhere! 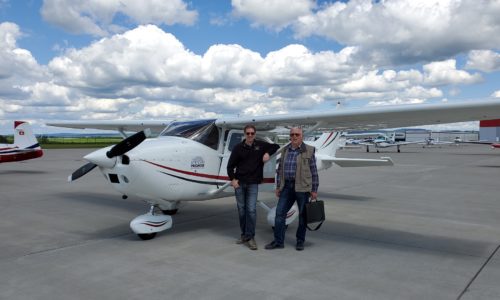 With Joachim, in Kassel 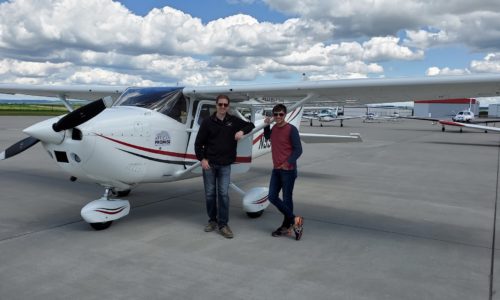 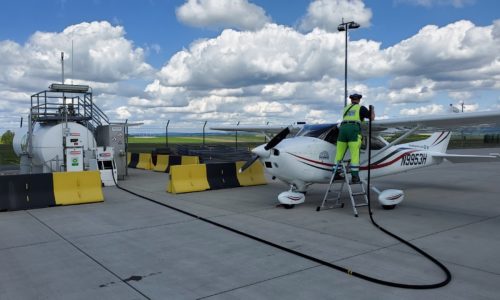 Fueling up before departure; fuel was cheaper here than it would be at Rotterdam!

After being assigned the easily remembered transponder code of “1111” I flew one of the standard departures out of Kassel, back over the same VOR that had started the arrival procedure, and was soon given a direct clearance to the Dutch border. The waypoint given had not been on my original flight plan so I had no route after this next VOR. As I drew close I asked German ATC where they might like me to fly next; they weren’t sure, so handed me over to the Dutch. They thought about it for a moment and then cleared me direct nearly all the way to Rotterdam. 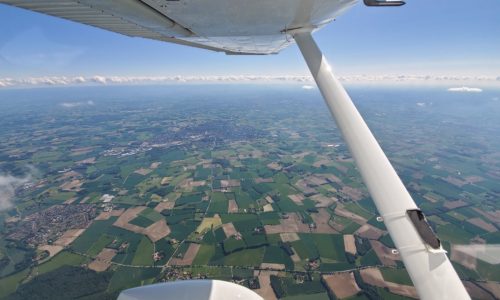 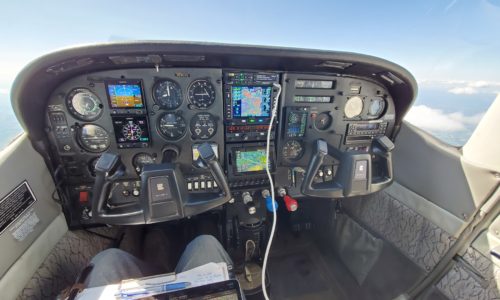 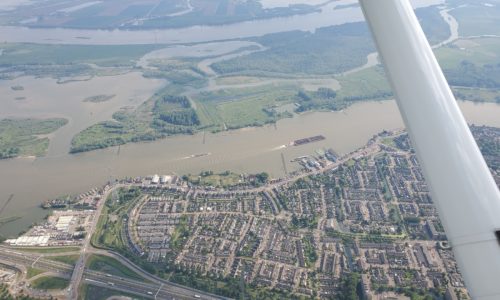 As I drew closer and started the descent, I cancelled IFR and joined the very familiar Romeo VFR arrival in to Rotterdam. Having been based here for nearly 5 years, this was very familiar territory! I landed after a Transavia 737, touching down halfway along the huge runway to ensure I was well clear of the wake turbulence from the larger aircraft. I had contacted the FBO, Jet Aviation at Rotterdam, a while back to enquire about keeping the aircraft in a hangar there for the month The reply made it clear that they did not want to be bothered with any light GA aircraft; about €1,500 for the month, which would rent you a fairly nice apartment in the city. I had therefore contacted the aviation department of my employer, who keep their aircraft at Rotterdam, and they had very generously agreed to keep my little C182 in the hangar with their Falcon jets to support the flight. 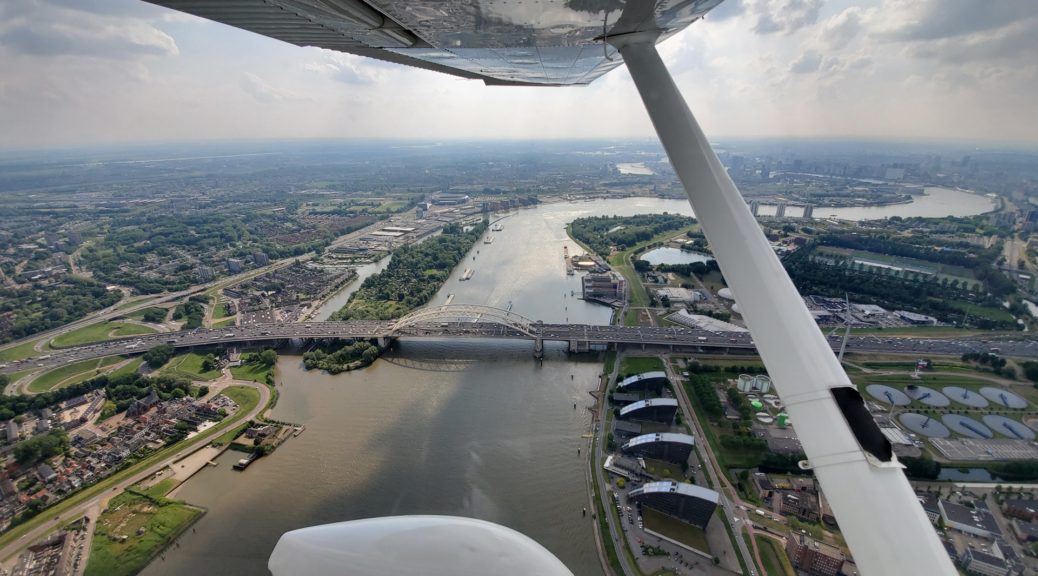 On the Romeo arrival to Rotterdam 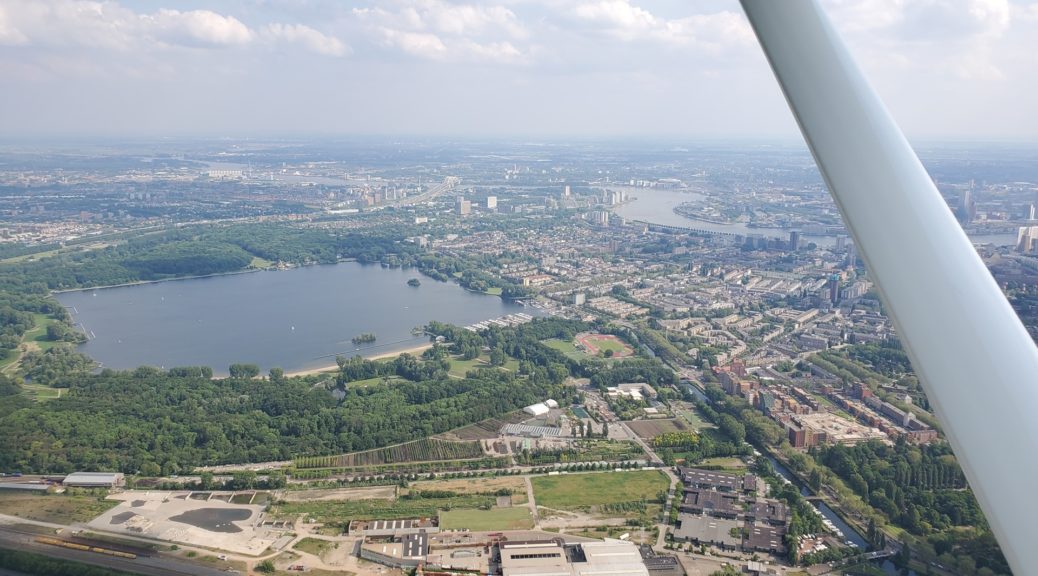 Passing point Oscar, on the arrival to Rotterdam 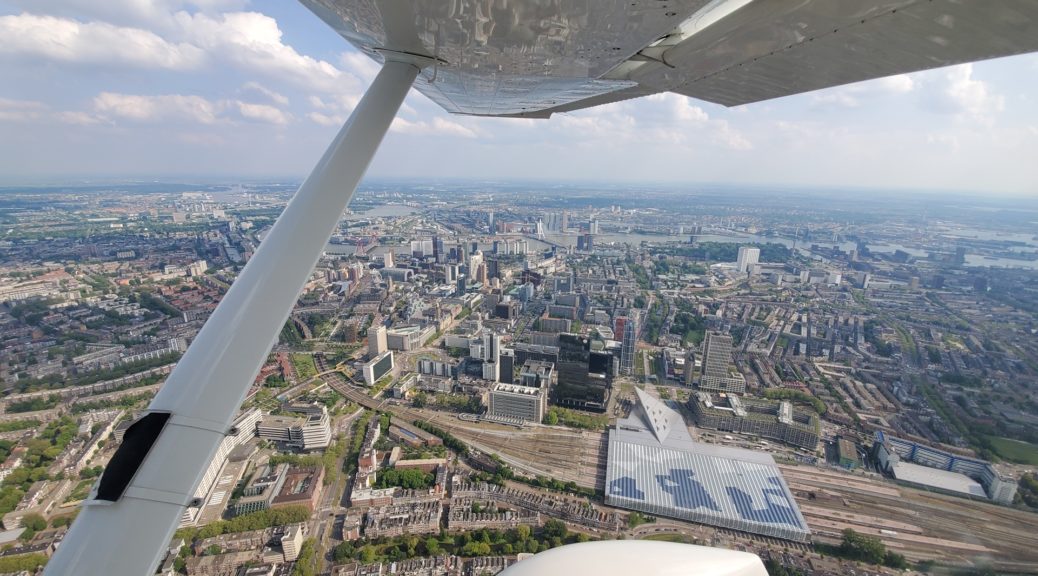 Rotterdam, with the new station in the foreground 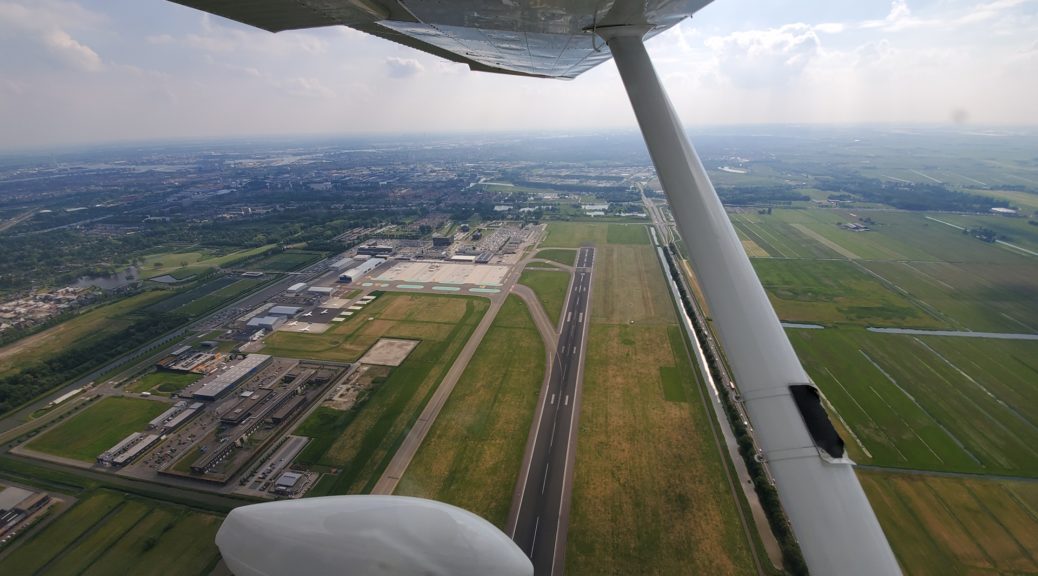 When I arrived, a small breakdown in communication meant that the guys in the hangar didn’t know I was coming, and wondered who this crazy man was who thought he was going to park his Cessna in their spotless hangar. Happily this was very quickly sorted out and “Planey McPlaneface” was tucked in next to the 3 week old Falcon 7X that had recently arrived. Th jet and hangar were so beautifully kept that I made a point of quickly polishing up my own aircraft to get rid of all the bugs, so that it wouldn’t look too out of place! Before being collected by my friend Justin, I had a chance for a quick tour of the aircraft. My suggestion of an airplane swap was politely declined. I said goodbye to Planey, locked him up, and it was off to work for a month, before the second section of the flight would begin…