I turned up to Zelienople bright and early on the morning of Monday, May 6th. Shortly after I arrived, lots of others started trickling in; these included many friends and aero-club members, Jeff and his colleague from Miracheck, and even an Associated Press photographer and a film crew and news anchor from Pittsburgh’s Channel 4 News! We spent about 2 hours fueling, doing a news interview, and carrying out the final packing and loading. 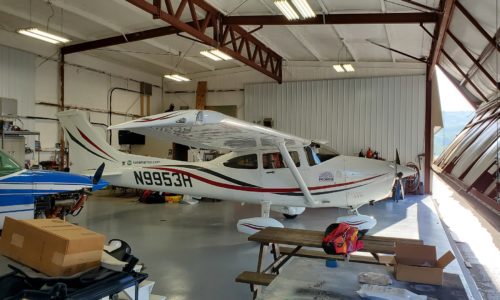 The door rises on the first day's flying 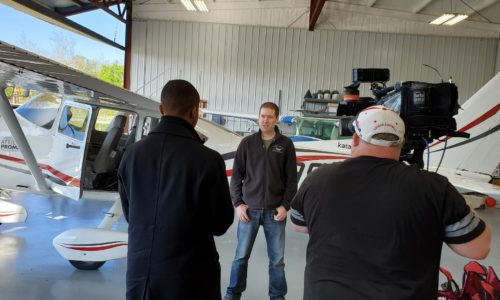 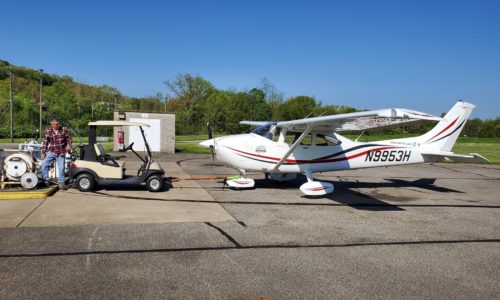 Time to fill the tanks to the brim - ferry tank excepted. 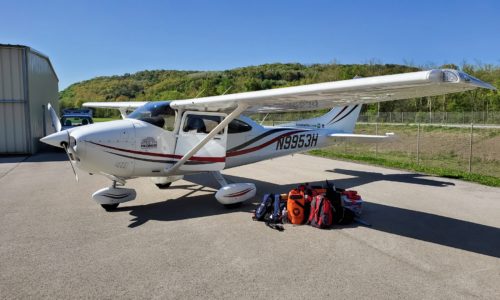 All this, must fit in there... 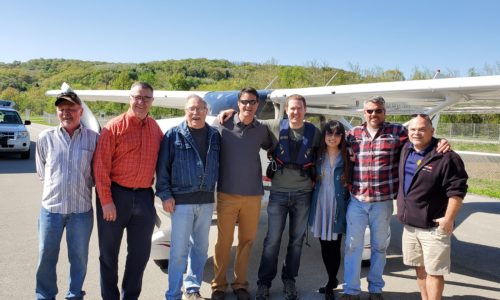 Just after 10am, at last, I pushed the throttle forward and lumbered into the air off of Zelienople’s runway 35. The aircraft that landed ahead of me was carrying out his first solo flight after several years away from flying; 20+ spectators and a news crew probably added some unwelcome pressure!

The weather was perfect, with t-shirt temperatures and barely a cloud in the sky. I climbed straight out to the north, and at two thousand feet made a gentle right turn direct to the first way-point on my IFR flight plan as instructed by Pittsburgh Approach. My route took me along Lake Erie towards Buffalo, New York, passing close by to Niagara falls before coasting out over Lake Ontario towards Toronto. I had worn my life-jacket in anticipation of this water crossing, as well as to ensure all the equipment attached to it did not become uncomfortable after long periods in the cockpit! 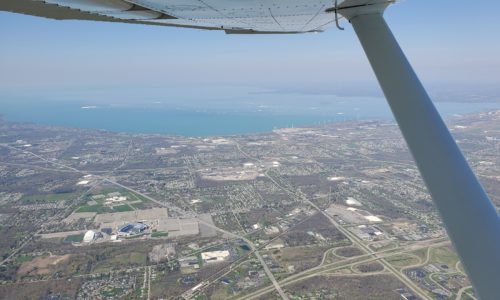 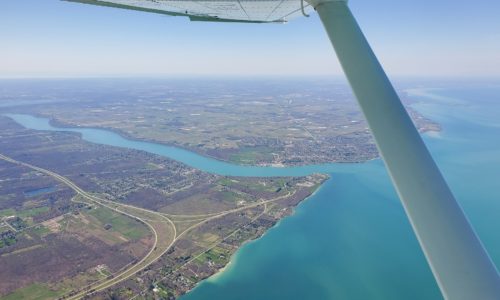 Coasting out over Lake Ontario 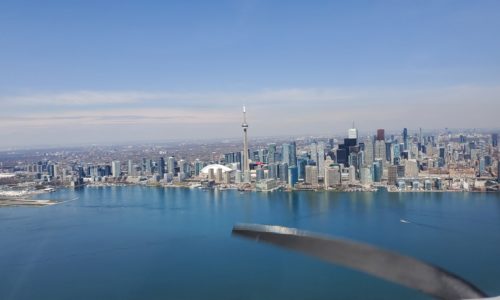 My first stop, Toronto, draws near

ATC directed me to runway 26, landing behind a Porter Air Q400, and I taxied back across the ramp to the STOLport FBO. Waiting for me there was my university friend Mike (a veteran of the 2015 Dakotas trip), with a couple of croque-monsieur sandwiches, a light travel bag, and a survival suit. The Atlantic-crossing team was together! Mike sweet-talked the helpful lady behind the reception desk into calling ahead to our planned destination (in French Canada, our French wasn’t up to the task) and we confirmed closing hours of 10pm, and availability of fuel. The stop for the night would be “Chibougamau”, chosen on the basis of being in roughly the correct direction, and the fact that we really liked the name. This is not, sadly, the first time I have landed at an airport solely because I like the name or identifier, previous examples including Chowchilla, KIWI, and KINK. 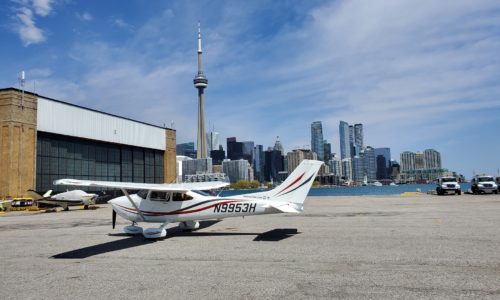 On the ground in Toronto to collect Mike 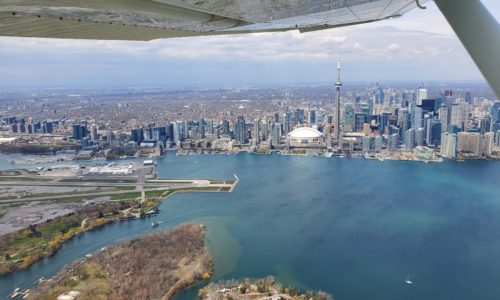 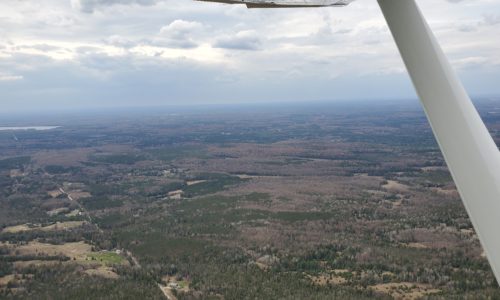 An hour from the city, wilderness

We took off heading south under blue skies, with a long left turn around to the north, giving us beautiful views of the city sky line. We flew initially over suburbs, then agriculture, and then less than an hour from the city we were flying across apparently untouched wilderness. As we flew, we played a game of “where would we land now if the engine quit” – Mike was of the opinion that this became steadily easier as we flew north, due to the availability of frozen lakes. I was less inclined to trust their load-bearing capacity. The terrain was exclusively spruce trees, lakes, rivers, and the occasional small logging road, all dusted with snow and ice. 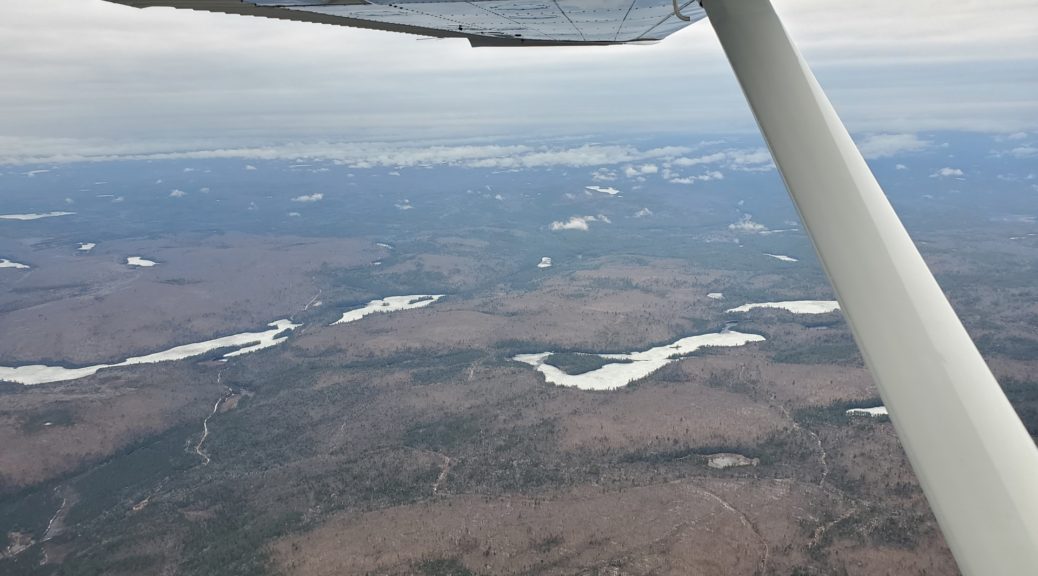 The first signs of lingering winter 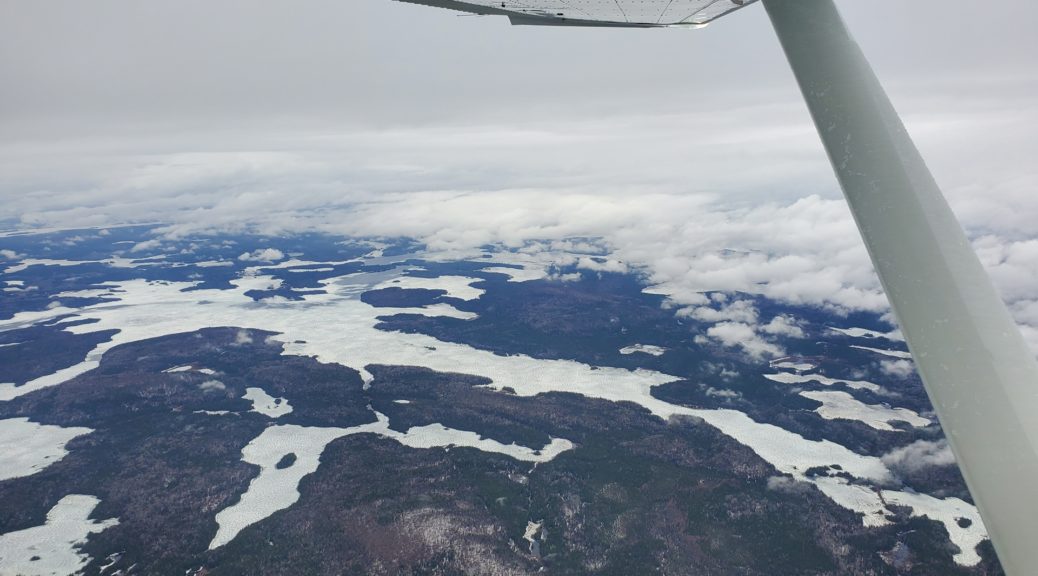 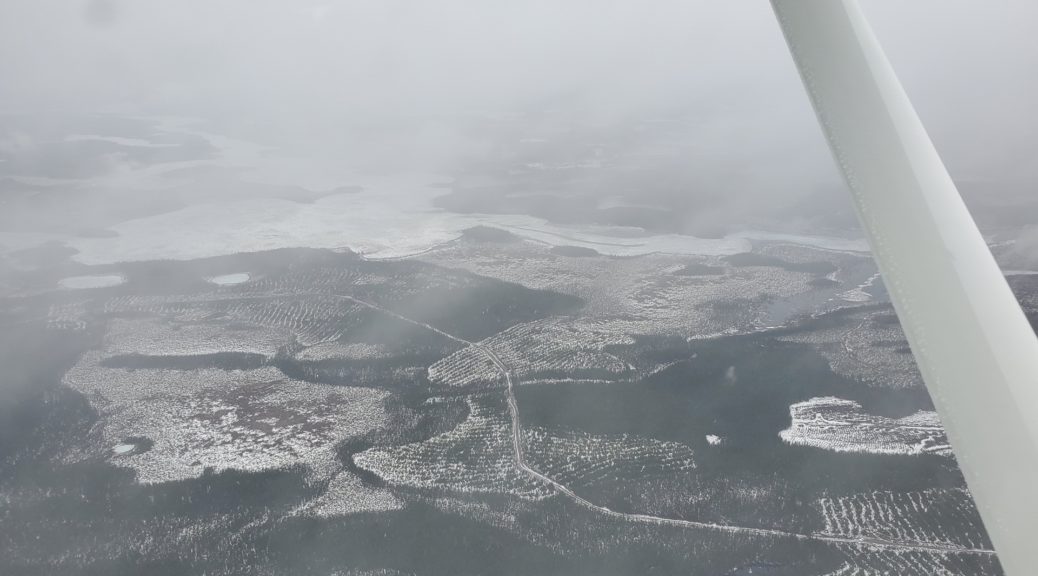 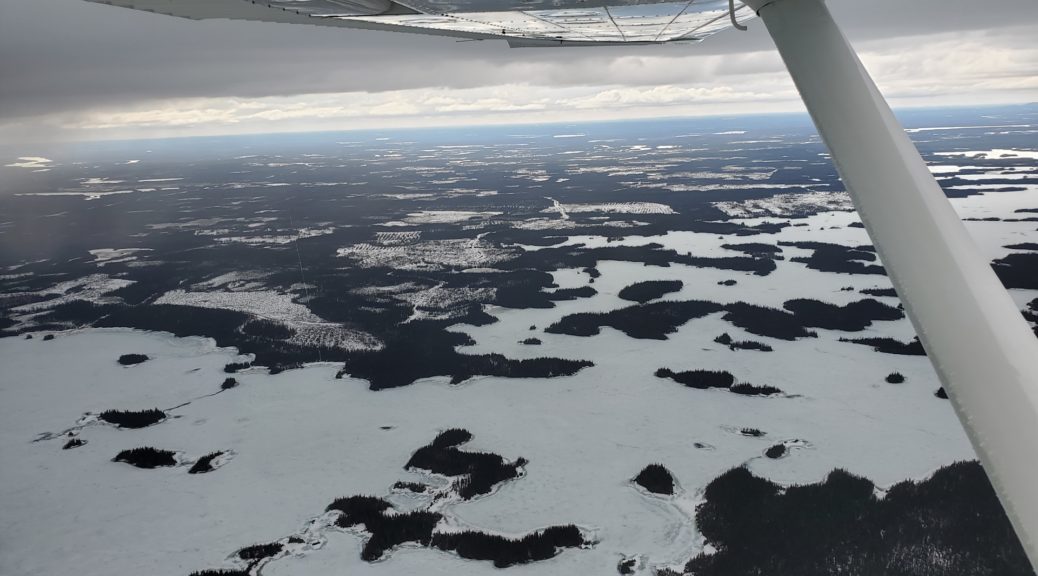 The weather slowly deteriorated along the three hour flight, and we broke clear of a low overcast with mist and foggy patches (that we’d been flying under) just before arrival. We’d hardly shut down the engine at the fuel pumps before the fueler was there to fill us up. Luckily, as with almost everyone we met in French Canada, his English was better than our schoolboy French; we spoke just enough to get ourselves into trouble. Fuel paid for, we took a taxi the 20 minutes into town, marveling at the vast landscape and being impressed by the comprehensive network or snowmobile highways that supplemented the road system. 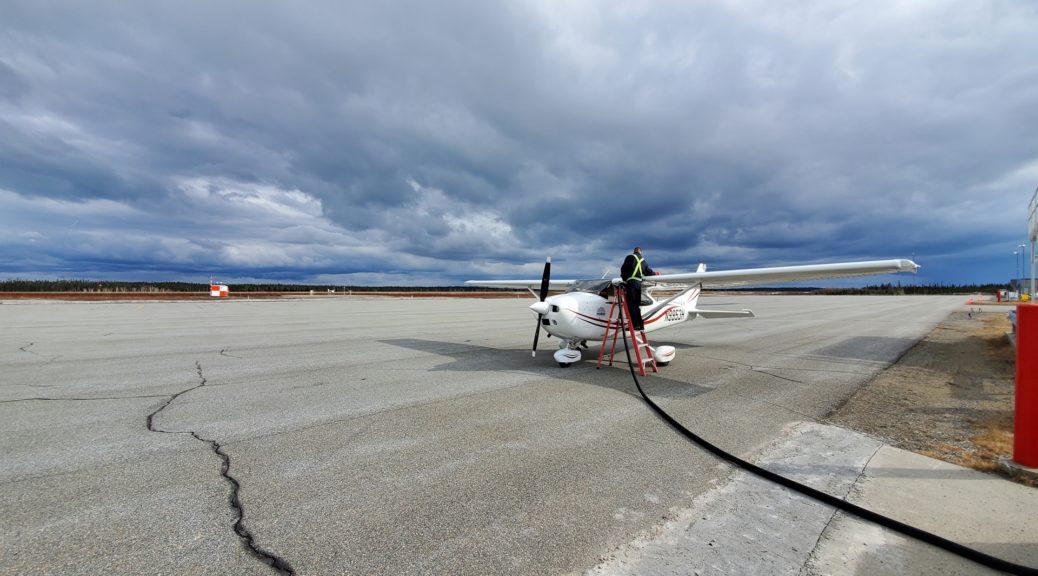 Refueling under menacing skies in Chibougamau 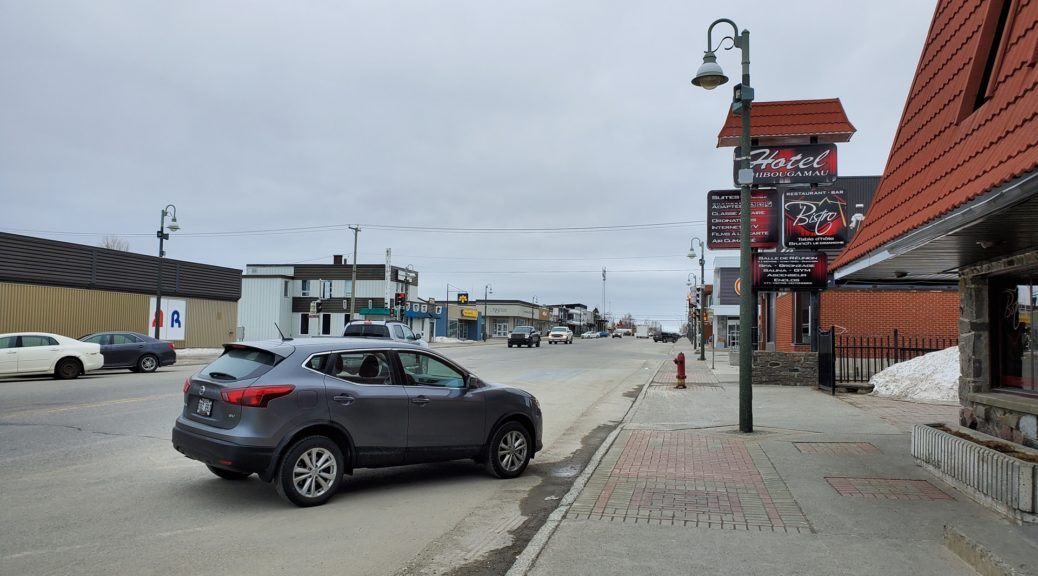 The Hotel Chibougamau turned out to be surprisingly well equipped and recently refurbished. We checked out the only two pubs within walking distance, both turning out to be closed on Mondays, so I settled for pizza, and Mike for a lasagna which he described as “horrifying”. After another check of the weather for the next day, leading to a change of plans as conditions north were not looking promising, we turned in.