I finished work, and headed to the US, less than 10 days before planned departure. The work that was scheduled for completion while I was away had not progressed very far, so it was to prove a hectic few days getting ready for departure!

While I was away, Quality Avionics of Grove City had removed my Avidyne IFD-440 GPS unit, and replaced it with the larger Avidyne IFD-540 unit. This is a fairly quick and simple swap as all the connectors are the same, and all you need to swap is the tray. They also updated all the avionics software, with Kevin even flying his own ‘plane down to Zelienople to conduct the final update on the transponder; great service! 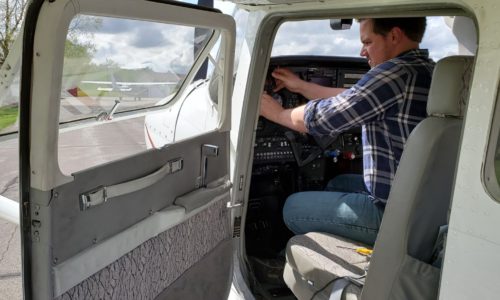 Kevin finishing off the install 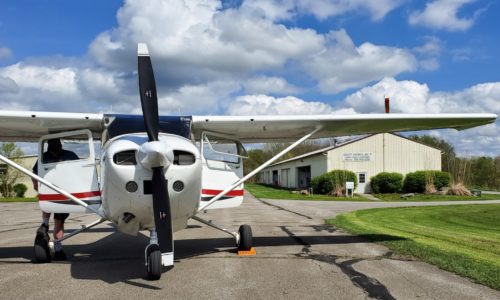 A beautiful day for avionics work! 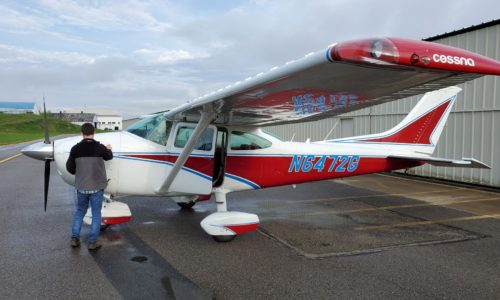 About to go flying with Jeff of Miracheck

While the avionics work was being finished off, I flew with Jeff (creator of the Miracheck and AmbiFi apps), to learn more about his virtual copilot app. He had very kindly donated a pro version of the app, along with an iPad to run it on, for the trip. We spent a while running through all the features, while some heavy rain passed through the area. Connecting to the pilot’s headset by Bluetooth, the app will read through checklists that you set up and customise (a huge variety of standard checklists for all sorts of airplanes can be downloaded in the app), and will listen and recognise/react to your responses. A particularly nice feature is that you can request and run through emergency checklists all without ever needing to take your attention away from the controls and other tasks to dig out and read through a paper list. 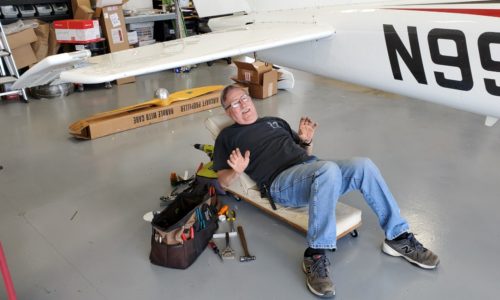 Sling puts the finishing touches to some tail work 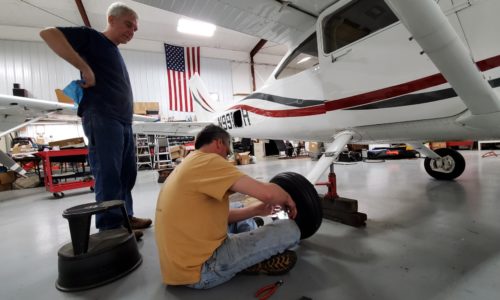 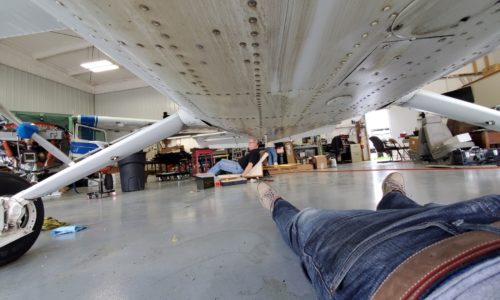 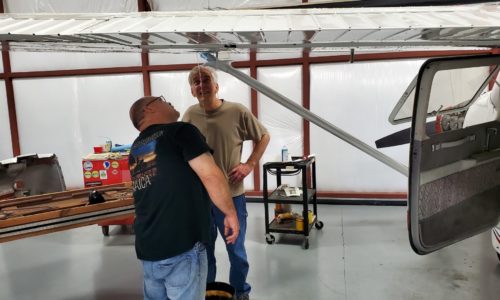 The fuel is meant to come out here, right? 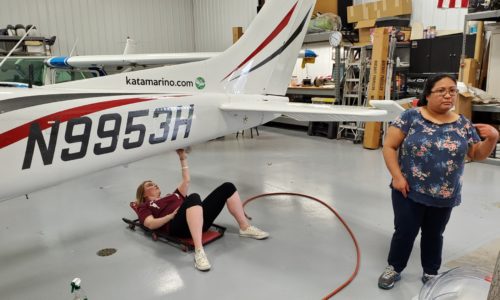 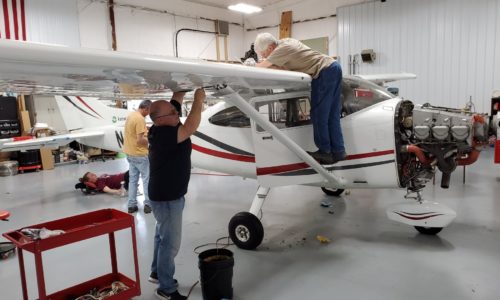 Final items being addressed before departure

Avionics work done, it was time to tear the airplane apart in the Zelienople maintenance hangar and take care of the final preventative maintenance and upgrades. New brakes and tires went on, along with a new battery. All were in OK condition for flying locally, but not really up to setting off around the world for a year! Next was replacement of all the old rubber fuel hoses, to avoid a repeat of the fuel leak incident in Alaska the previous summer. New four-point harnesses from BAS were installed in the front seats, replacing the old three-point ones. These new harnesses would help survivability greatly in the event of a crash.

Months of thought had gone into the proper equipment to carry for the trip, to ensure that the minimum was taken (saving weight and space) while not missing anything essential, either for normal operations or for emergencies. The equipment was split across several categories: survival (carried on person), survival (in ditching bag), survival (stored in aircraft), tools, and luggage. Every item was listed in a spreadsheet and the packing location in the aircraft specified. No doubt, there will be a great deal of rethinking and revision of this as the trip progresses..!

Secured in the aircraft, for immediate use in event of a water landing, is a HEED3 escape air bottle, giving about 3 minutes of breathing air if required for escaping the aircraft.

Equipment on my person, for the first section of the trip at least, means items that I can pack in, or secure to, my life jacket. Anything I pack in my own pockets would be inaccessible under my survival dry-suit, if going down in the water. On land, of course, there’s a good chance all equipment in the aircraft would still be accessible and therefore packing strategy is less important.

In the vest, I therefore include the most crucial items for short term survival and rescue in the water. The major items are listed below:

Despite things not being quite ready, a fantastic departure barbecue party went ahead on the evening of Saturday May 4th, hosted by Condor Aero Club and organised by Carrie and others. Despite a rainy afternoon we had a turn-out of 60+ people, and raised almost $250 towards African Promise. 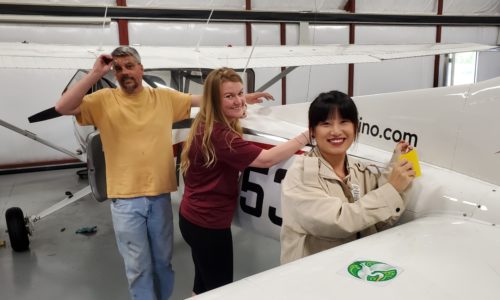 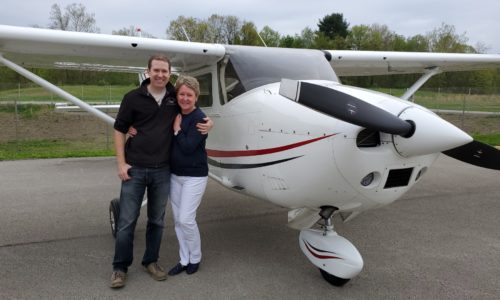 With my visiting aunt! 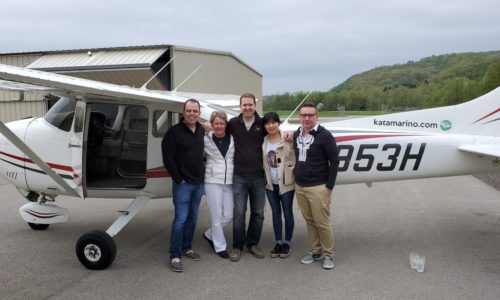 Friends and family before departure! 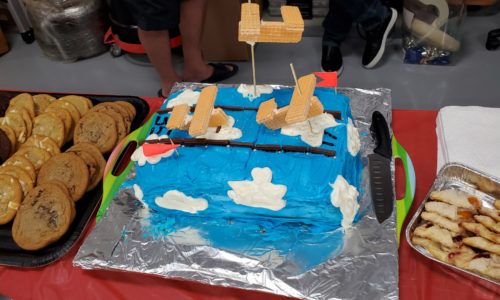 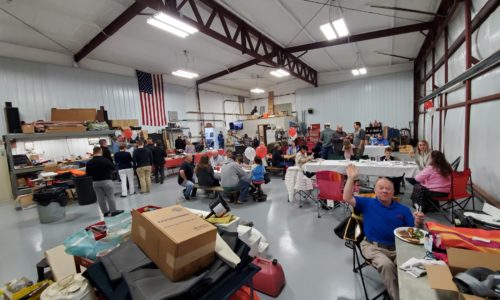 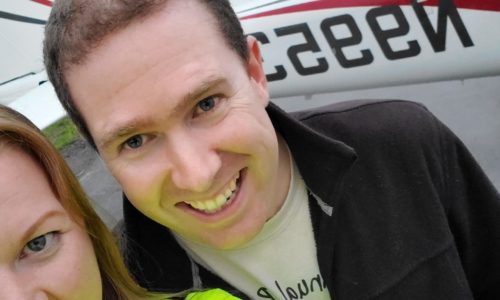 2 days later, it was finally time to depart…