Before I set out on the flight around the world, I had carried out a ditching and water survival course. I decided to attend this course because of the very large amount of water I’d be flying over during the trip, and the fact that the piston engine in my C182R could never approach the level of reliability of a turbine engine. The course was extremely helpful and really changed a lot of my thinking and planning around the topic of ditching. Ever since, I had been keen to carry out an onshore survival course. Now, in New Zealand with no option to fly onwards in the foreseeable future, I had the time to do this.

I selected an overnight course run by SOS Survival Training, close to Auckland. I left the AirBNB early, stopping at a shop along the way to pick up a few final supplies; food for the first day, and fresh batteries for my torch (that’s a flashlight, for any Americans reading). Along the way I stopped off for a waffle. Unfortunately it seems like the young lady behind the counter was new to making waffles, and it took a good 30 minutes and several attempts before she produced something she was willing to serve. As a result I pulled into the parking area at SOS Survival Training a few minutes late and feeling a little guilty, although full of waffle.

Luckily, I was not the last one to arrive, and hadn’t held anything up. A few minutes later the last attendees arrived and our ex-army instructor, Stu, greeted us and led us down the hill and into the bush, to the main camp area. Three courses were running in parallel, lasting one, two, or three days. The whole group worked together, and attendees departed at the point they’d chosen. Stu sat us all down in the main camp and briefed us about the days to come, as well as handing out a survival knife to each participant for use during the course.

We started off with some discussion of the priorities in a survival situation; first aid, shelter, heat, water, food and so on. These must be addressed in descending order of priority; you can last a lot longer without food than you can without water, for example, so always secure a source of water as a higher priority than finding food. We then moved on to demonstrations and practice of how to properly use a survival knife, and how to tie some basic knots. Having worked as a sailing instructor in my youth, the latter were not too challenging! 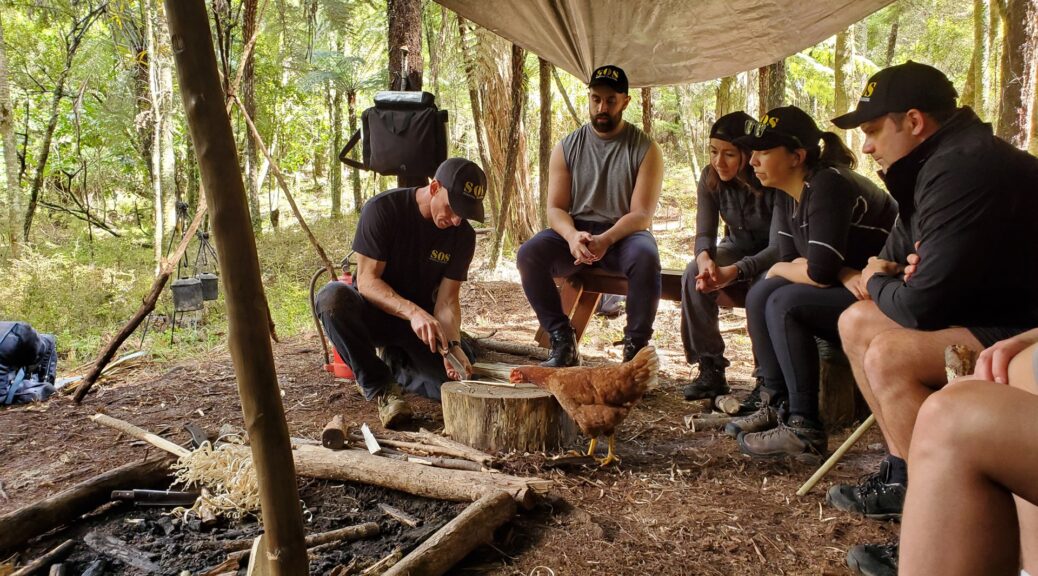 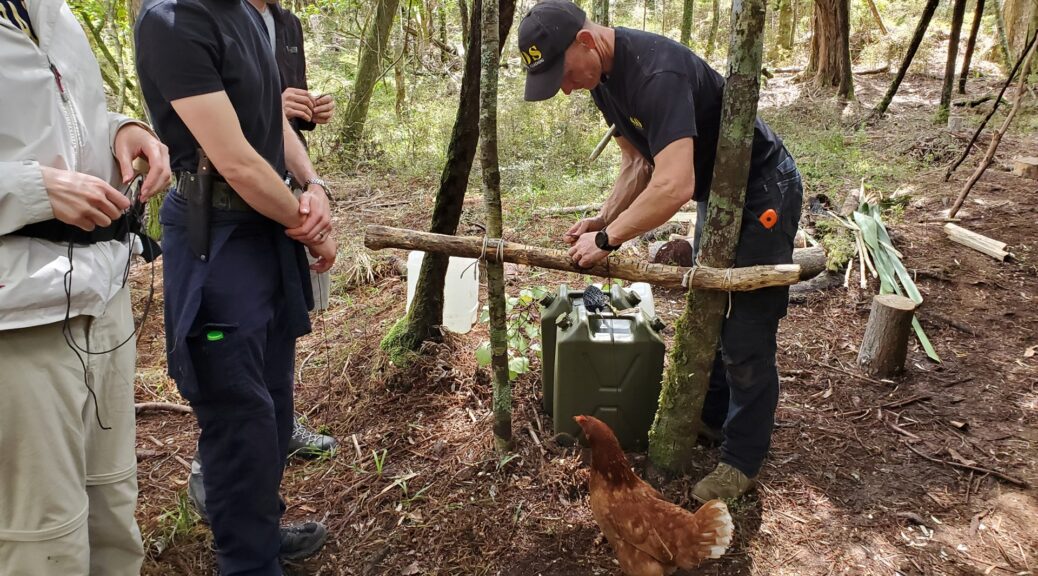 Having spent a while practicing these skills, Stu led us off into the bush to apply ourselves to preparing a shelter. He covered details of how to choose a favourable site, choosing and gathering appropriate building materials, and the required techniques for constructing the shelter. After the briefing we set out in pairs to choose locations, and construct rudimentary shelters; Stu’s parting comment as we scattered was that those of us doing the overnight course would be sleeping in the shelters we built now! This focused the mind somewhat and my partner (just here for the day) and I worked hard to put together something that would be comfortable. It seemed like no time at all before Stu’s whistle went and it was time to meet up at camp for some food. 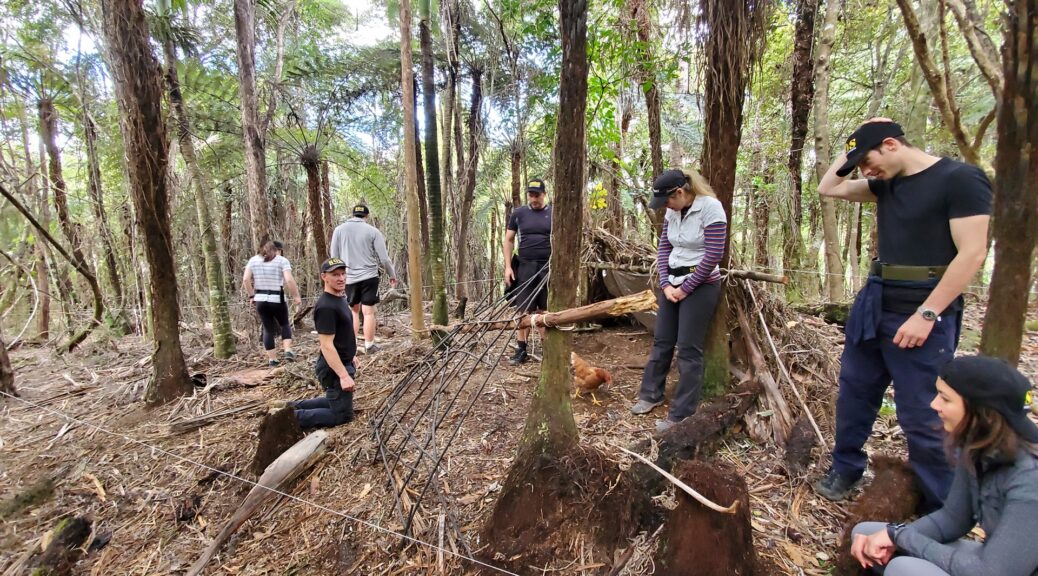 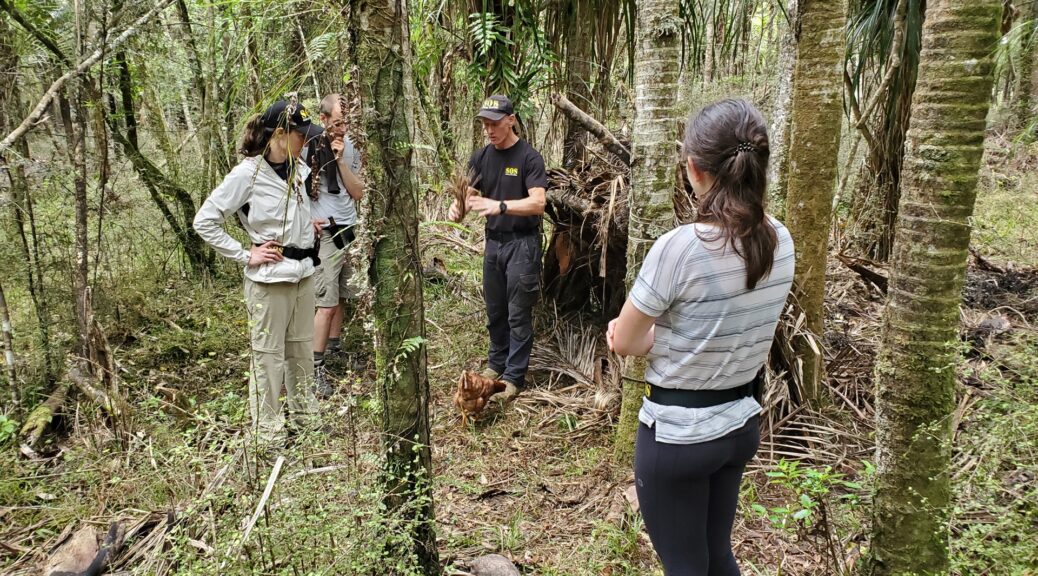 Here's one I built earlier

After lunch, our next task was to build a fire. First, Stu set us loose to gather materials and build a fire based on how we thought it should be done. There was a wide range of results, most of which did not result in a sustainable fire! This done, we all gathered back together and Stu briefed us on the proper way to sort and prepare fuel, and get a fire going. One of the most important things he pointed out was that most people don’t gather nearly enough small material and kindling, and people often try to build the whole fire straight off; a better option was generally to get a tiny fire going with kindling, and then gradually start feeding in progressively larger material. This was all done without matches; we learned to use a flint to get things going, this being less vulnerable to getting damp. We were then given the chance to try and make a fire again; this time, the success rate was significantly higher. 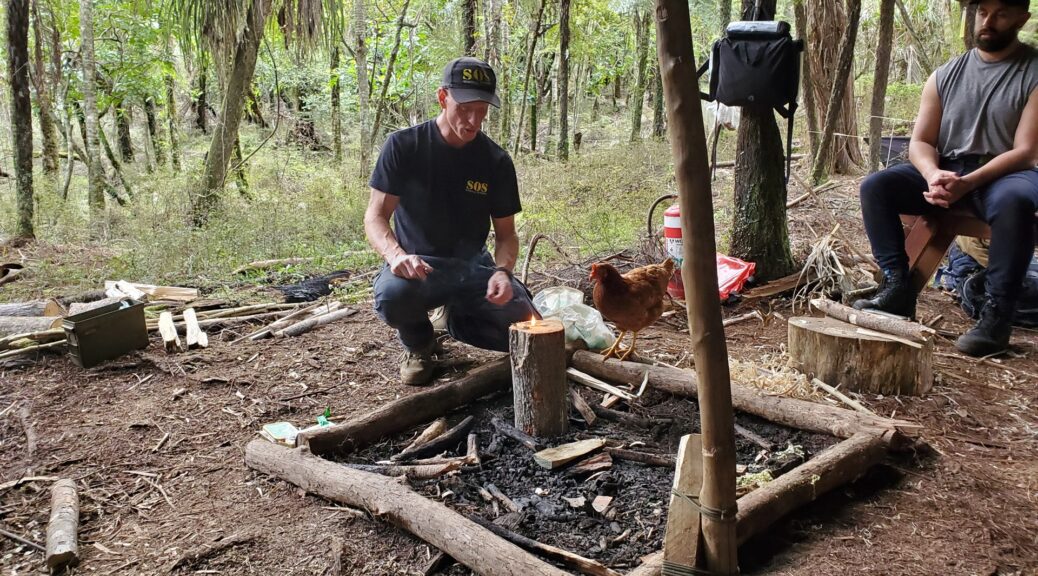 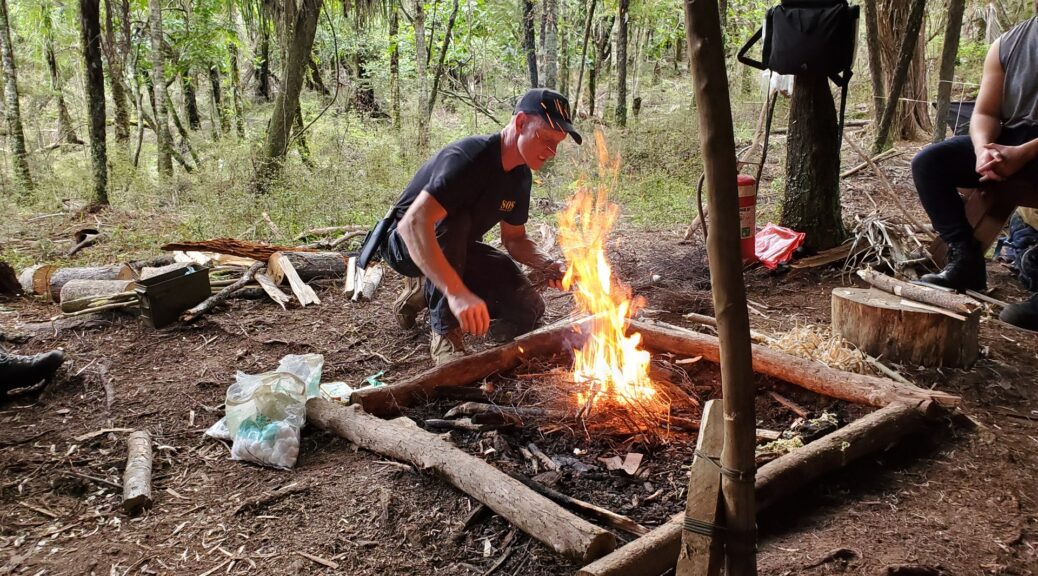 That's how you do it!

The time quickly came for the 1-day attendees to depart. The rest of us were taken back out to our shelters, and given a while to finish them off and gather firewood for the coming night. My shelter ended up fairly comfortable; a lean-to style structure between two trees, with the downhill side partially open, but the leg area fully closed in. I prepared my fire material close to the high end of the lean-to, ready to build my fire close enough to provide warmth, but not so close that it’d set the shelter alight. With the light rapidly departing, I made my way back to the camp and the four remaining attendees, and we enjoyed an excellent camp-fire cooked dinner courtesy of Stu. 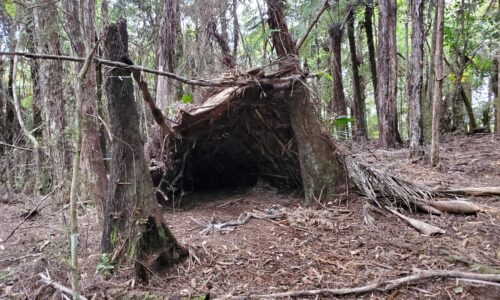 My accommodation for the night 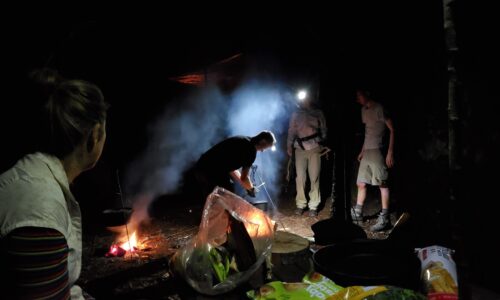 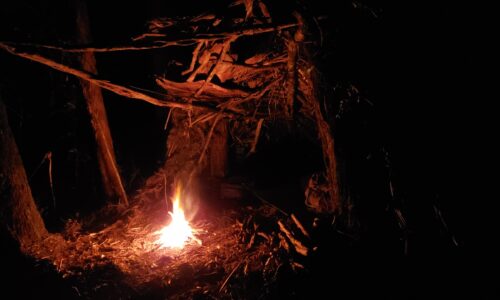 My shelter with the fire going, ready to turn in

After dinner, we scattered back to our shelters. We were cheating a little, as we’d had a relatively short time to prepare shelters, and also used sleeping bags. I didn’t think this was too big an issue, as any time I’m flying in a remote area I tend to have survival gear including a sleeping bag anyway; although of course there’s no guarantee that one would be able to get any survival gear out of the aircraft after a forced landing if there was a fire. I got my fire going successfully, using my new skills, and settled in for what turned out to be a remarkably comfortable night.

I woke at about seven the next morning, and packed up my sleeping bag. Making my way down to the main camp I found that all the others were already there and getting started on their breakfasts. I joined them, and after our meal Stu gathered us to chat through the plans for the day.

The first topic was signaling. After taking care of the first essentials of survival, one can then turn attention to rescue, and this will be a much easier proposition if searchers are able to spot you. These days we have the benefit of advanced technology such as Personal Locator Beacons, but nothing is infallible and knowing techniques for signaling using equipment that might be on hand, or available in wreckage, is an essential backup. We discussed the appropriate signals to be used to signal distress, and allow rescuers to follow if you decide to try and move out for self-rescue, as well as covering signal methods to be used for trying to attract the attention of search aircraft and personnel. 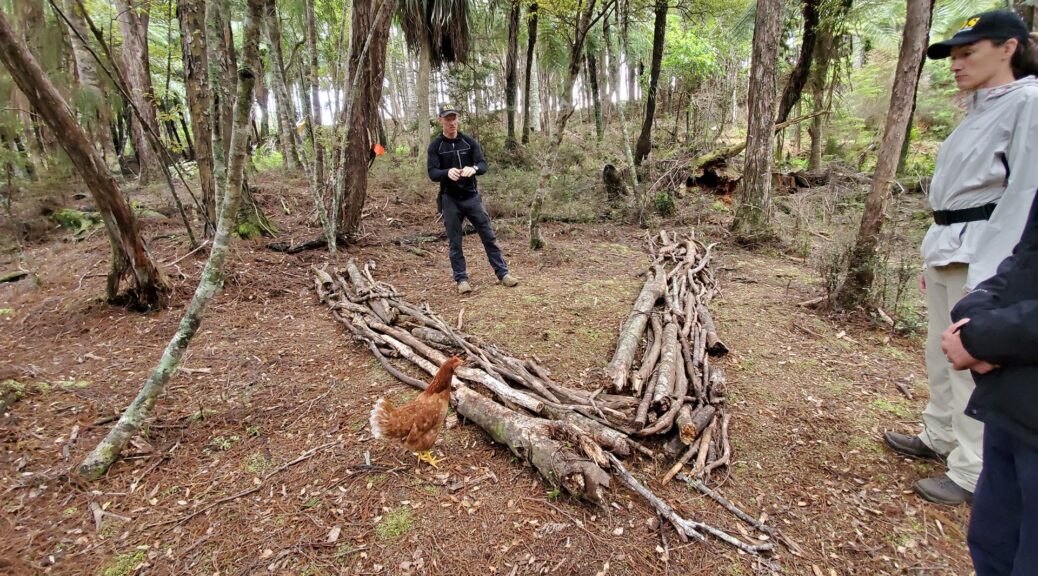 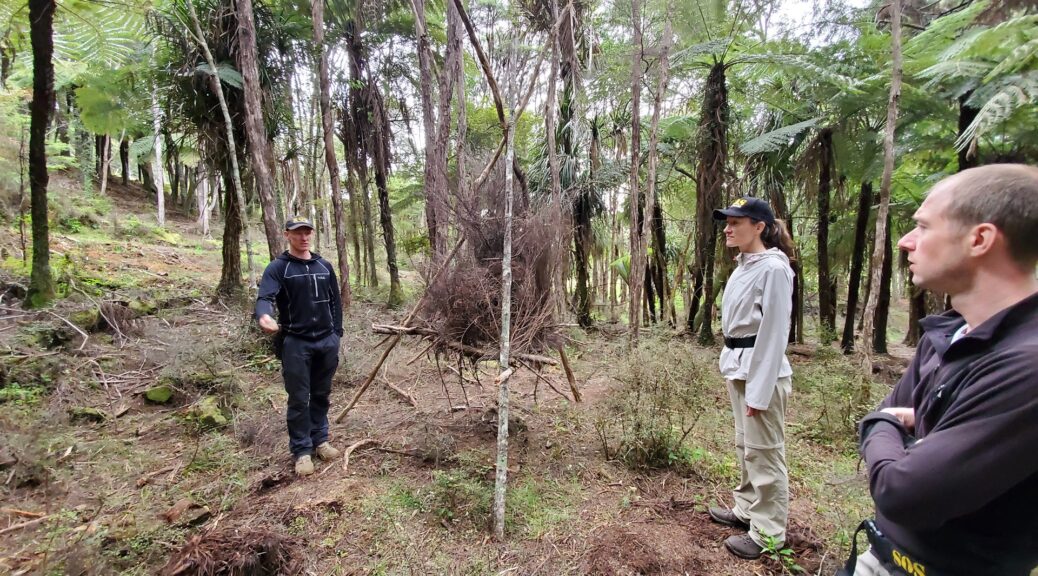 Our next lesson was about food. A person can go a long time without food, much longer than they can without water, so locating food is usually a little way down the priority list; although this absolute madman only waited a few hours after bailing out of his stricken TBM Avenger before catching a lizard and eating it raw. Stu first ran through some of the plants in the area that could be safely used, both for food but also for obtaining water. It was then time to learn about meat; should one be lucky enough to catch an animal, how would one prepare and cook it?

As teaching aids, Stu had secured two unlucky chickens. Although finding a chicken in the wilderness is probably unlikely, it seems that the general concept would apply to most animals that one might be able to secure. The ill-fated creatures were carried to a location a little way away from camp, with the tame chicken Lucky (who you may have noticed in the photographs) following along without a care in the world and clearly nonplussed at the idea of a public execution. A cord was attached around the chicken’s neck and used to stretch the neck out. A single swift flow then dispatched the chicken as humanely as possible. It was a slightly bloody endeavour, followed by plucking the feathers and removing the sections of the chicken that are not such good eating. “Lucky” picked up one of the severed heads and ran off with it. Chickens can be pretty brutal. 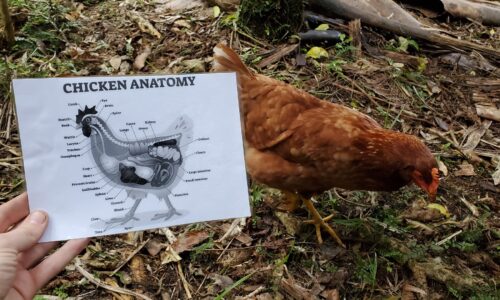 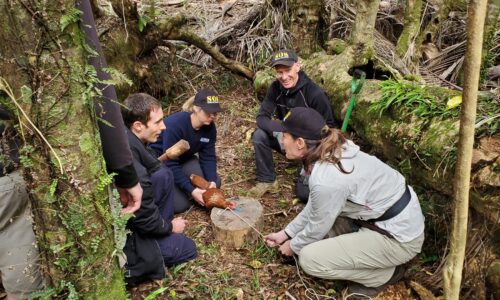 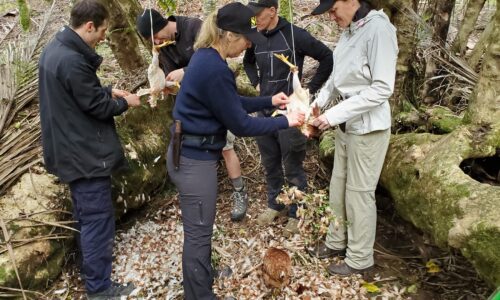 As we students finished off the preparation of the chicken, Stu prepared the cooking area and for lunch we enjoyed what was certainly the freshest chicken that I have ever eaten.

Before the day was done, we covered a few more survival skills. Firstly we looked at knots to be used for tensioning a line, useful for preparing a rope as the top section of a tent (with tarpaulin draped over it). We then had a demonstration, followed by practice with, a fire bow and drill. The majority of our attempts were rather unsuccessful, even with special pre-prepared equipment. I don’t fancy my chances of trying to do this in the wild with tools improvised from the forest, so I shall continue to carry a couple of easier sources of fire in my survival pack! 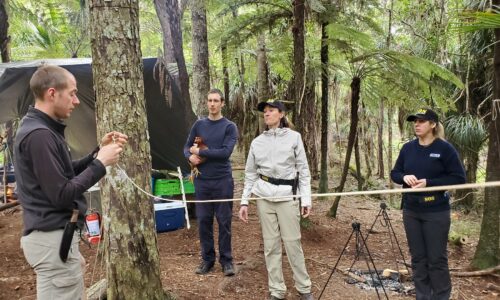 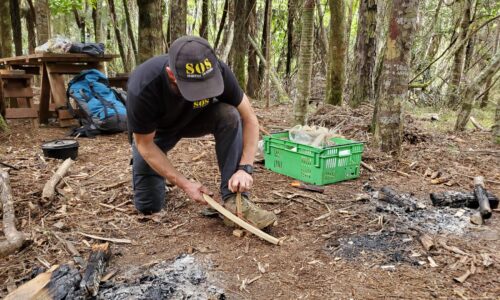 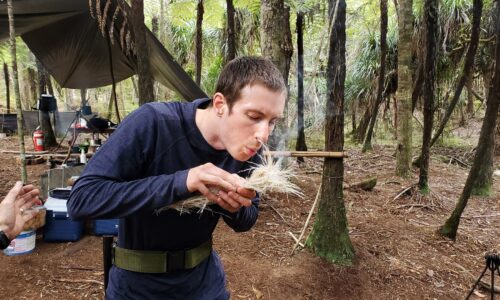 The only vaguely successful attempt

This brought me to the end of my time on the course. Although it was really just an introduction to wilderness survival skills (and the New Zealand bush is not the harshest of terrains), it had led me to rethink my survival equipment and plans in case of an emergency where I end up landing out somewhere remote. I’d recommend it to any pilot doing the kind of flying described on this site; as well as being potentially life-saving, it’s both satisfying and a lot of fun!

Click here to read about the next part of the Round the World flight.