The commercial flight to Sydney was 17 hours long, but I was lucky enough to get a complete row to myself and arrived having slept comfortably most of the way. All the staff in the airport were wearing face masks, concerned about the coronovirus, and I was asked to confirm that I’d not been in China in the last 2 weeks. It didn’t take long before I was on the train north to Newcastle, and my aunt’s apartment. I collected my rental car and settled in for a quiet afternoon at hers.

Jet lag had me awake early, and I made the 45 minute drive to Maitland airport to arrive a little after 7am. Some time later, Gerard arrived and we went to get the aircraft out of its hangar. N9953H was looking all ready to go!

The first few days of flying would just be to break the engine in. I found a few small issues on my preflight check, but nothing critical, and I was soon climbing out from runway 05 at full power. A new engine needs to be run at high power for the first hours of its life, so for the first 2.5 hour flight I just flew around the local area making sure everything was ok. 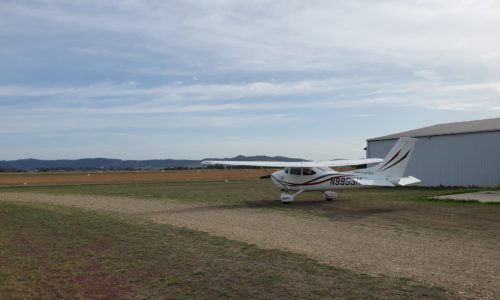 Engine back on and ready to go! 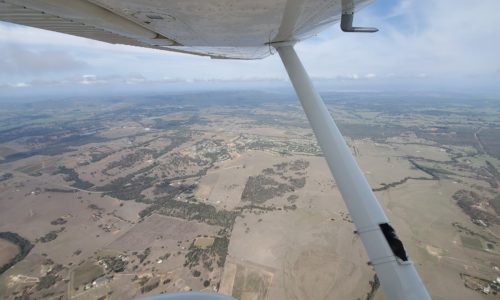 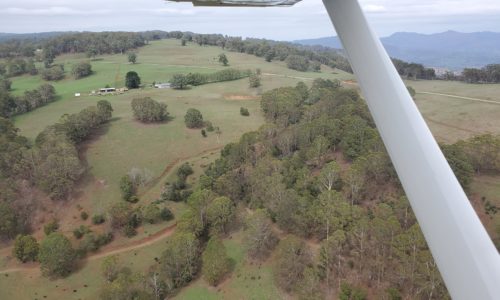 I came back in to land at Maitland, and spent the next couple of hours with the mechanics from Hunter Aerospace correcting the small issues I’d found, and fine tuning the engine controls. This done, and a quick McDonald’s eaten (I had attempted to order UberEats for delivery to the airport while I was flying, but without success) I took off for another afternoon break-in flight. This time I headed south in an attempt to fly the Sydney Harbour Scenic route; unfortunately, the Harbour Scenic One was not available from ATC so I settled for the slightly more distant Harbour Scenic Two. Still a great view of the city! 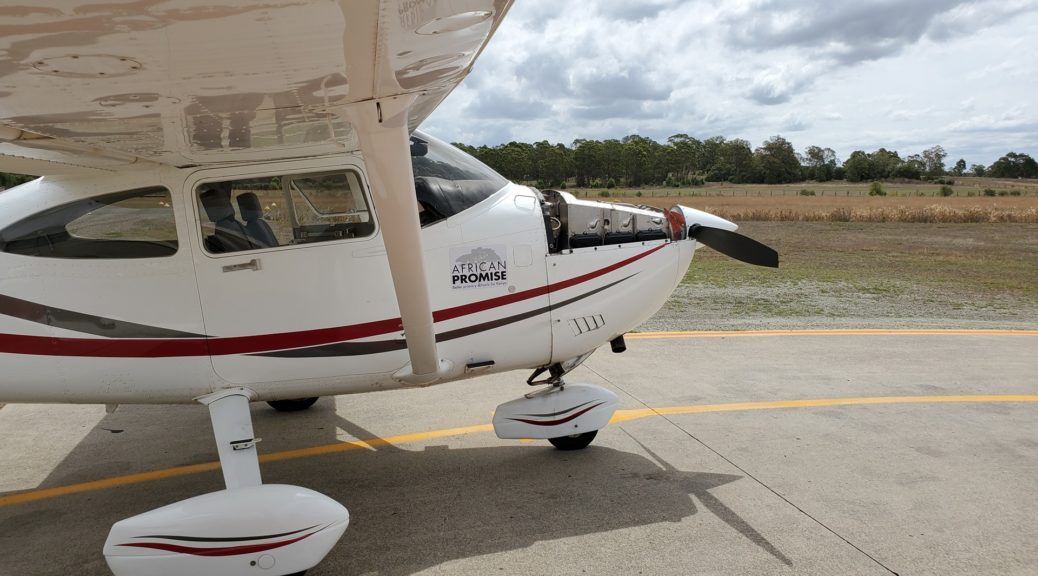 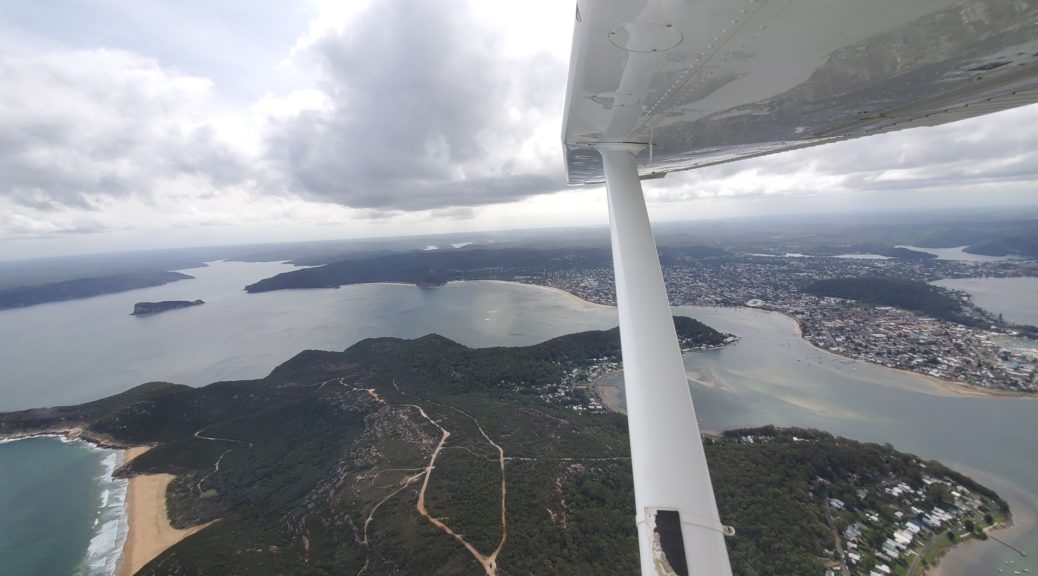 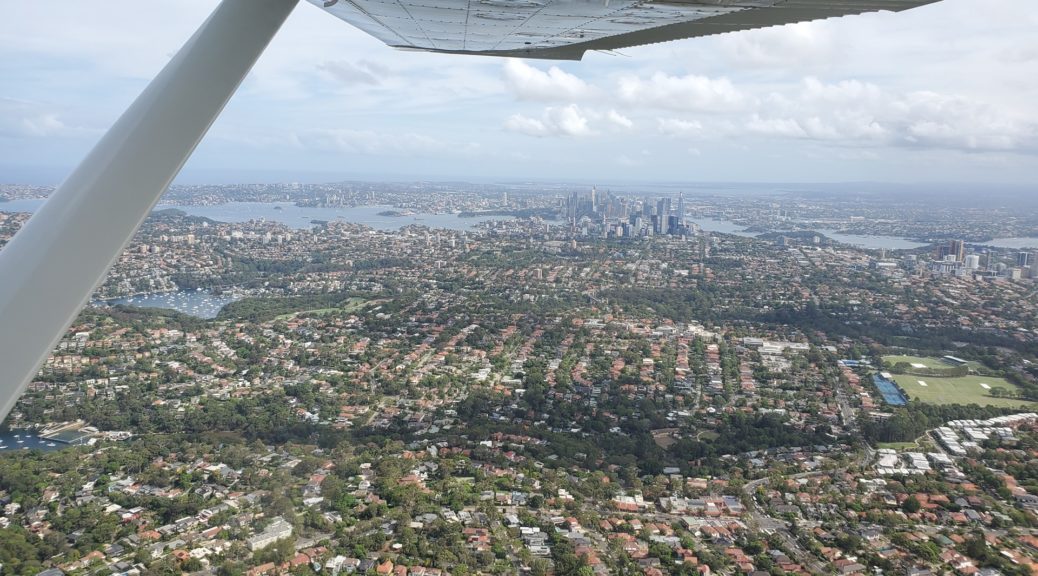 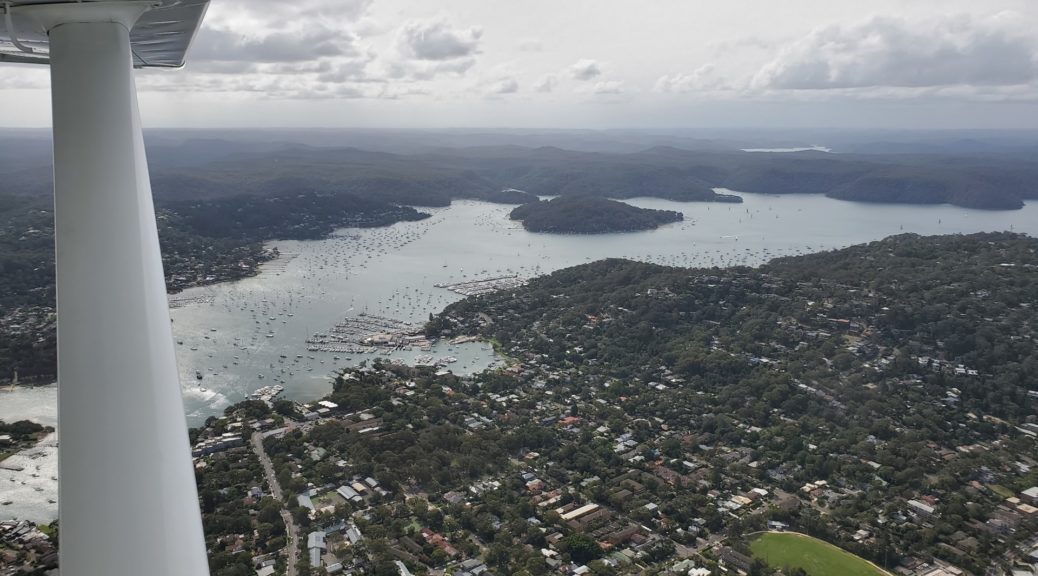 Heading back to Maitland

Testing successfully completed for the day, I stowed the airplane back in the hangar and made my way back to Newcastle for a quiet evening.

I arrived at the airport at about 11am, after running some morning errands. The first flight was just over an hour, around the local area again, before landing at the nearby airport of Cessnock. As I landed, another pilot asked if this was the round- the-world Cessna he’d been reading about! 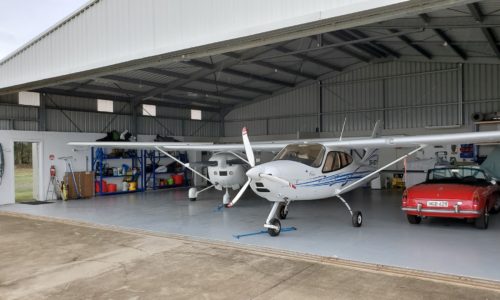 Ready for a day of testing 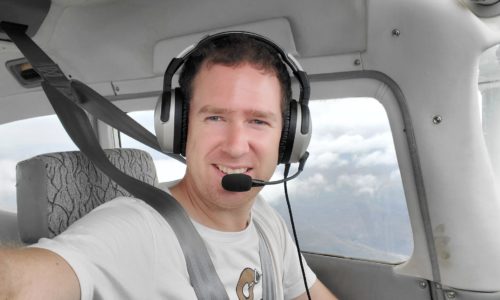 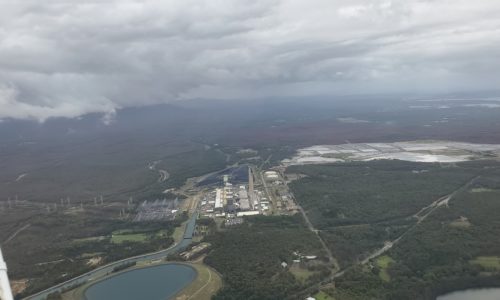 My aunt was a director based at the hotel next to the airport, so we met there for lunch and had a look around before heading back to the airport. That afternoon I was a little bored of local flights, so headed a few hundred kilometers west to the airport of Narromine, mainly chosen because it had a self serve fuel pump. I filled up and headed back east, to Maitland. 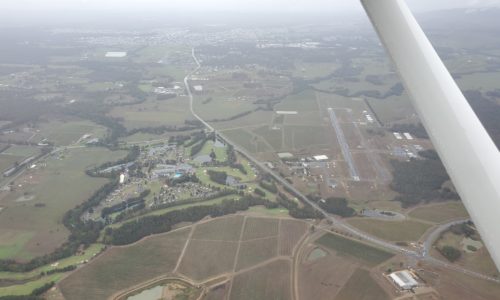 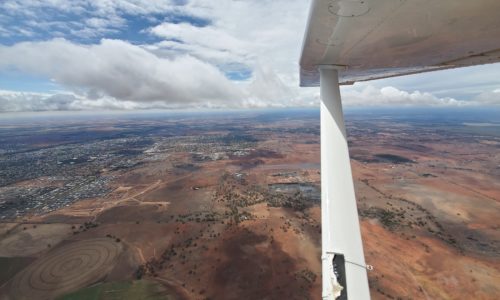 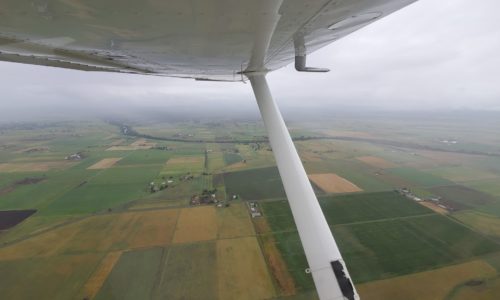 The previous night, my aunt and I had been looking for things to do at the weekend in Newcastle, and had discovered that the well known comedian Jack Whitehall would be playing Newcastle this evening. We’d watched, and loved, his travel show while I’d been at hers a couple of months earlier, so we managed to grab last minute tickets – a great show! 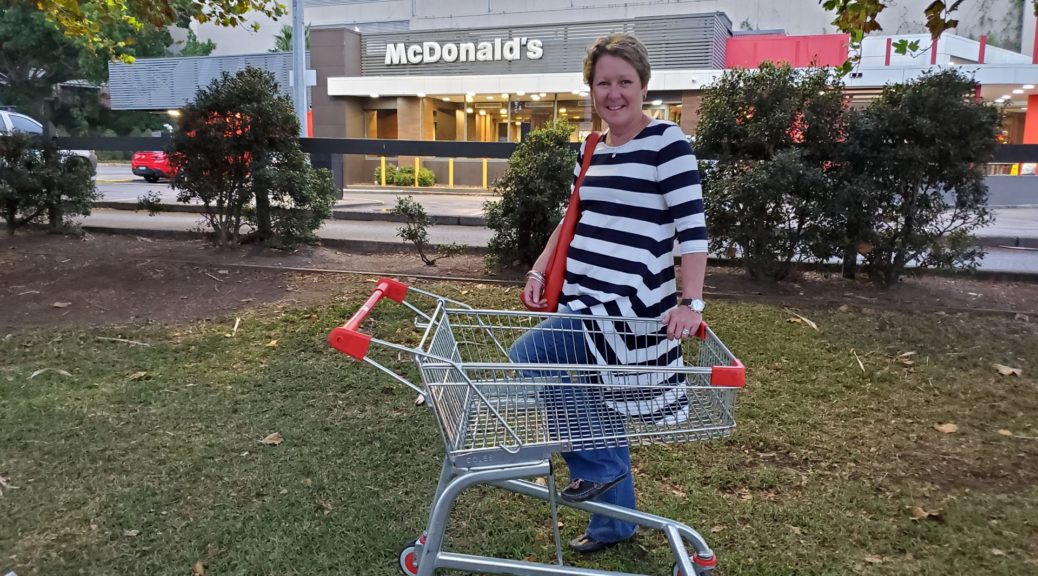 A touch of class in Newcastle 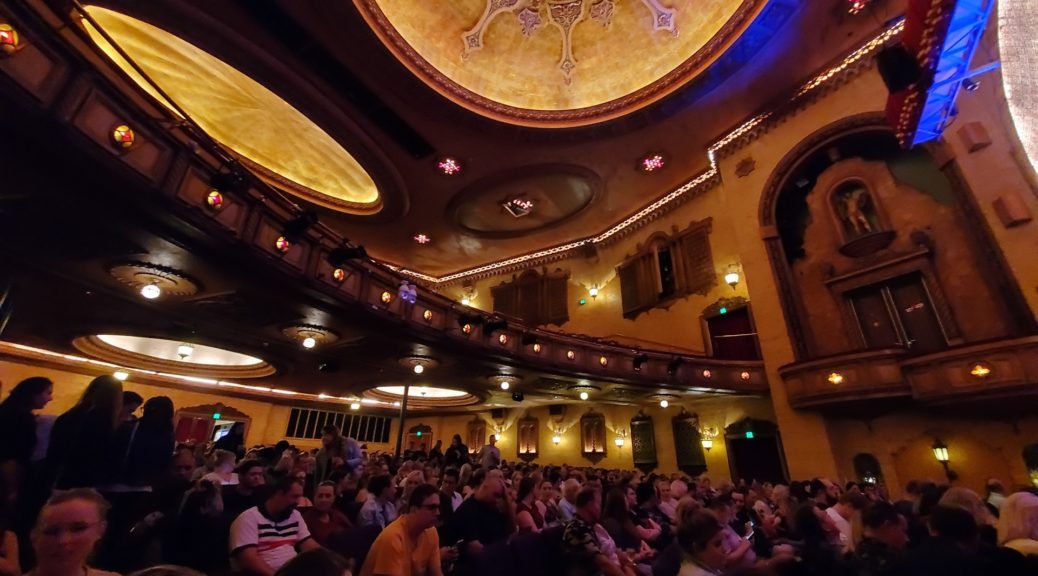 Evening at the theater

My aunt had taken the day off to fly with me. We were away by 5:30am, aiming to get to Maitland airport and depart just after dawn. The weather was poor, and we had a 300 nautical mile flight to the town of Albury where we were meeting a friend to have a long range, HF radio installed in the aircraft. This is mandatory for some of the upcoming Pacific legs. 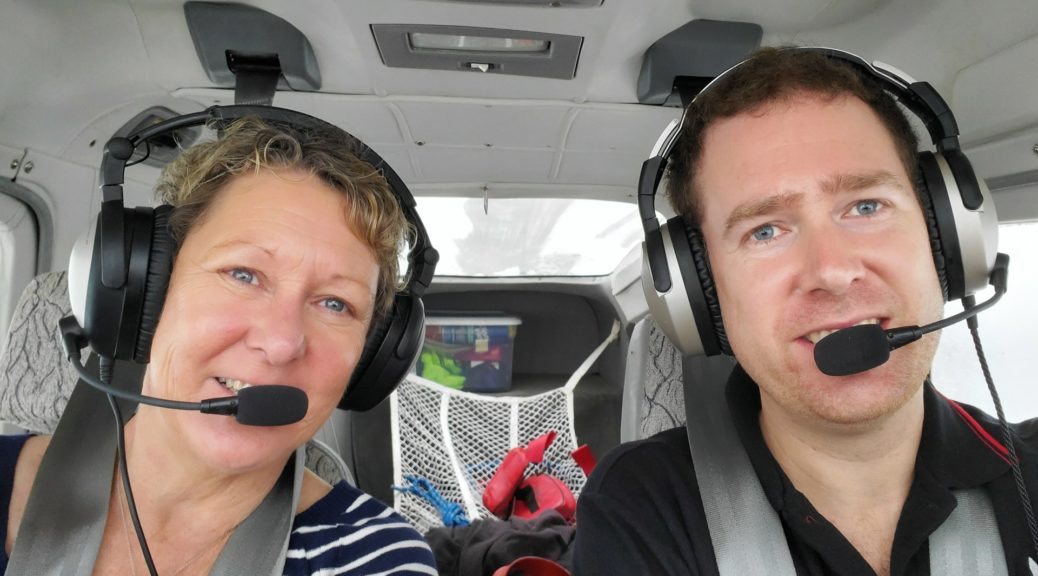 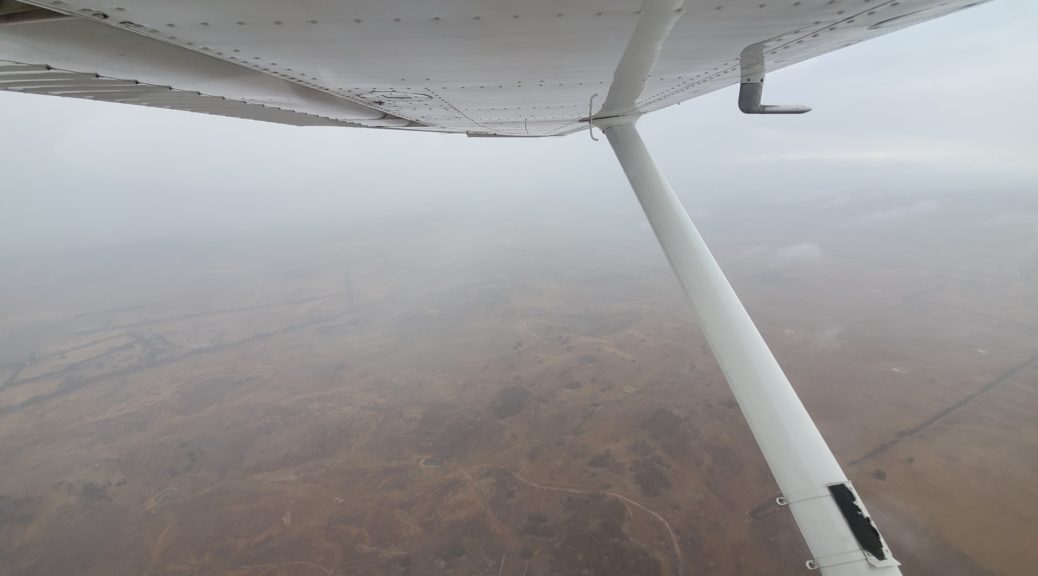 For the first hundred and fifty miles, across the coastal mountains of the Great Dividing Range, we were surrounded by thick cloud and rain showers. We did have a strong tailwind, but knew that would turn into a slow ride on the way back! After about an hour, the clouds started to disappear, only to be replaced with smoke and haze that kept visibility at just a few miles. Albury’s visibility was reported at 6km, so it wasn’t until final approach that we saw the runway, set down, and taxied to the Hazair hangar.

We were given the use of the little runaround cart to go and find the owner, Stephen Death. He was on duty at the water bomber, just across the field, and had just finished the morning briefing. He accompanied us back across to his hangar to get out the equipment, and advise on the installation – he does a lot of work ferrying similar aircraft across the Pacific, so knows exactly how it’s all done! 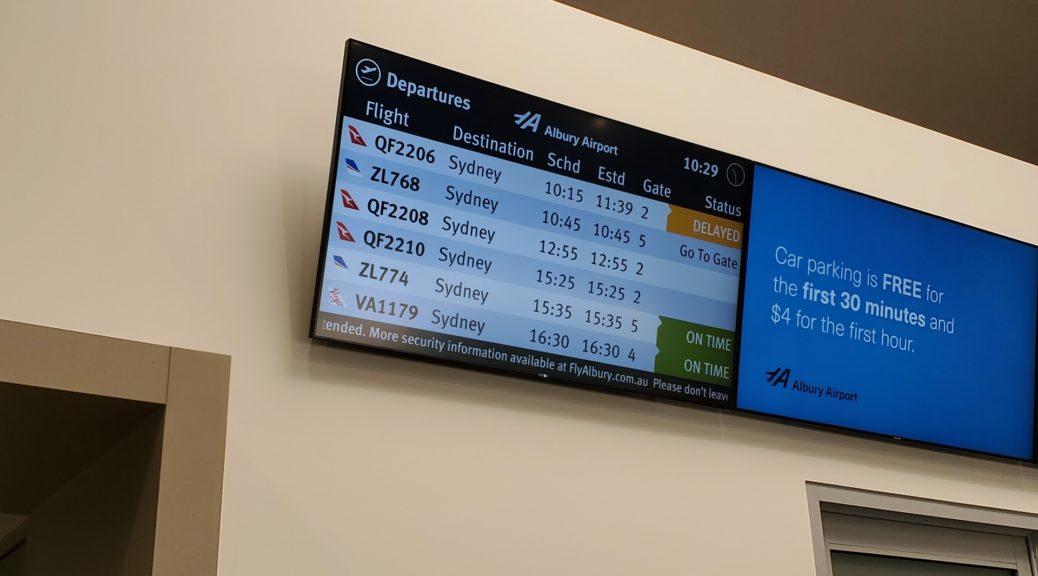 You can go wherever you like, as long as it's Sydney 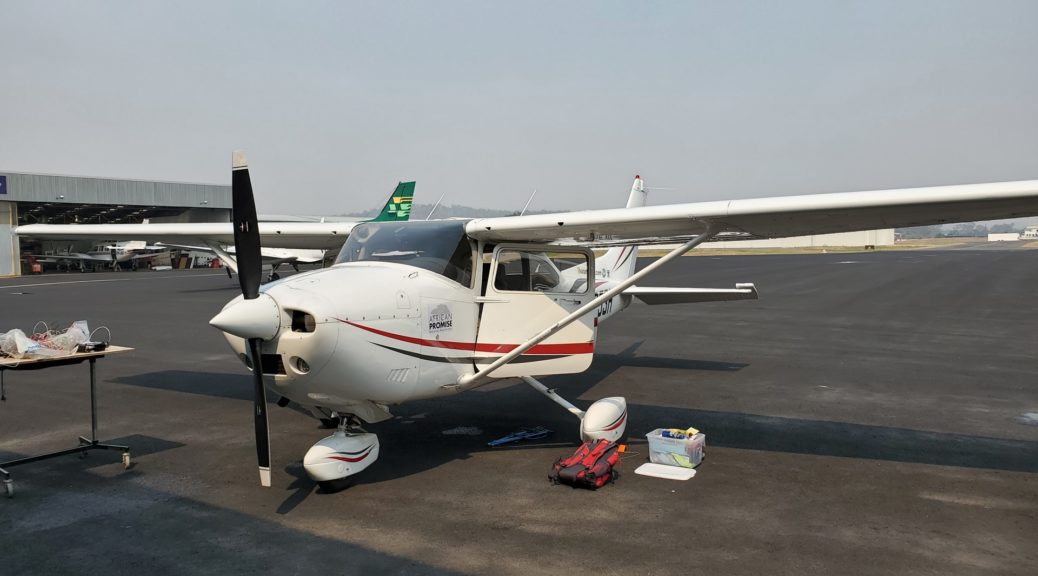 Working on the install

The install took a few hours, chasing an elusive tuning problem. We took a break in the middle for brunch at the airport cafe. Prominently displayed there was the story of a KLM Uiver aircraft that had become lost at night with radio failure near Albury while taking part in a London to Melbourne air race in the 1930s. The townsfolk heard it fly over, and the telegraph operator and town engineer cooperated to flash all the towns lights on and off simultaneously, spelling out the morse code for Albury. They then gathered all the car owners and used the headlights to illuminate a makeshift runway at the sports ground. The Uiver landed safely. 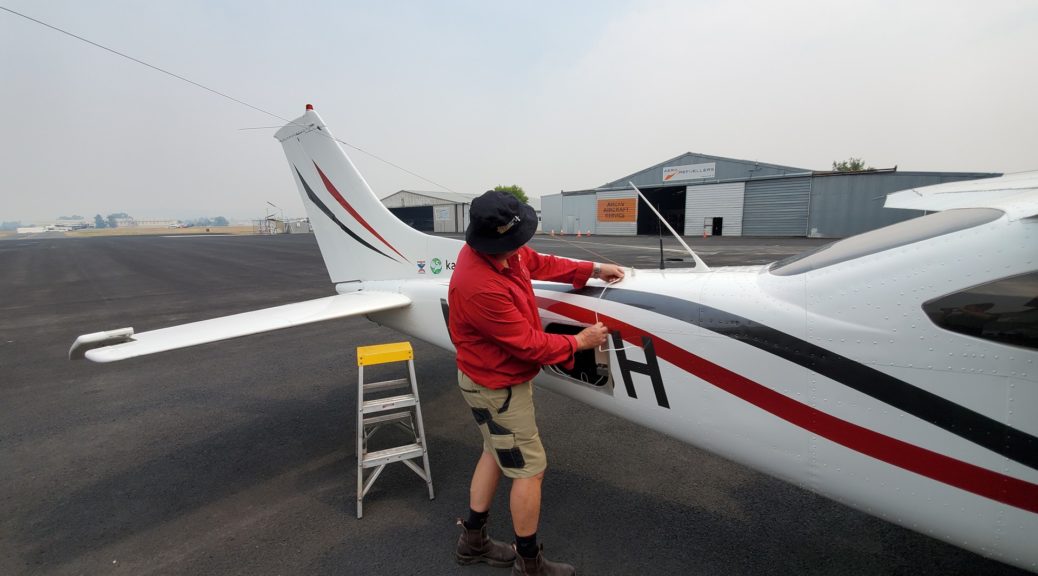 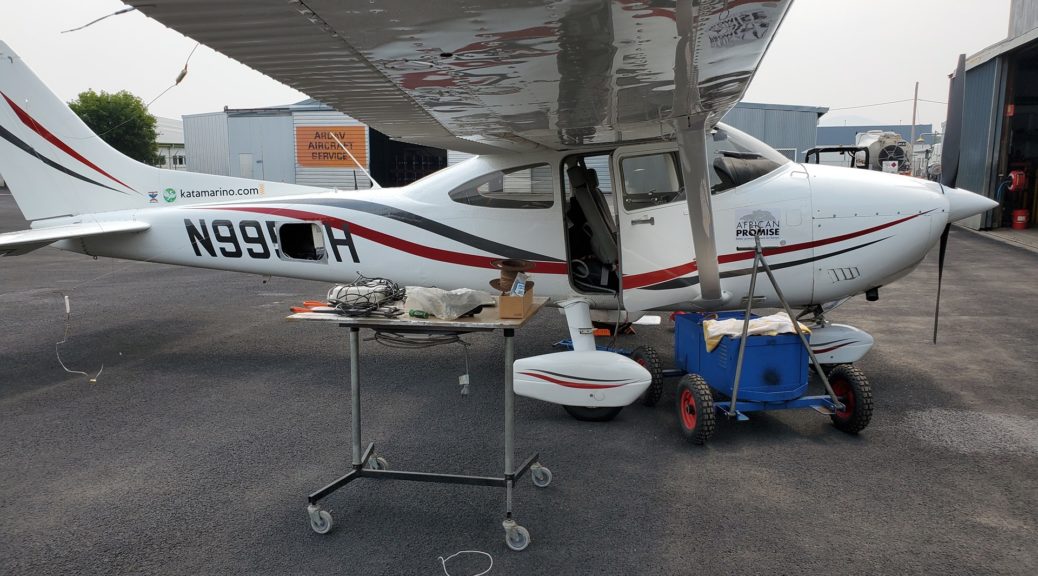 We completed the installation in the early afternoon, and after a successful test we headed back to Maitland – this time at a much slower ground speed, and conditions were roughly the same as they’d been on the outbound leg. We flew the GPS approach into Maitland, touched down smoothly, and taxied to the hangar where Gerard was waiting. It was good to finally see him again and thank him for looking after the aircraft, even if the engine had been found to be sick on his watch!

That evening we dropped into a local hotel to attend a “Pilots at the Pub” social session that we’d spotted on Facebook. It was great to meet a number of local flyers, and gratifying that most of them already knew about the flight through the online updates!