Aberdeen city center was shut down for a cycle race that morning, but luckily the buses were still running. We took the aptly numbered 727 bus out to the airport, hopping off one stop early and being collected by Signature who shuttled us round to their location. They were all smartly dressed and very busy this morning as a certain 757 with “Trump” painted on the side in large letters was in town for golf! The President was not aboard of course, but apparently family members were. 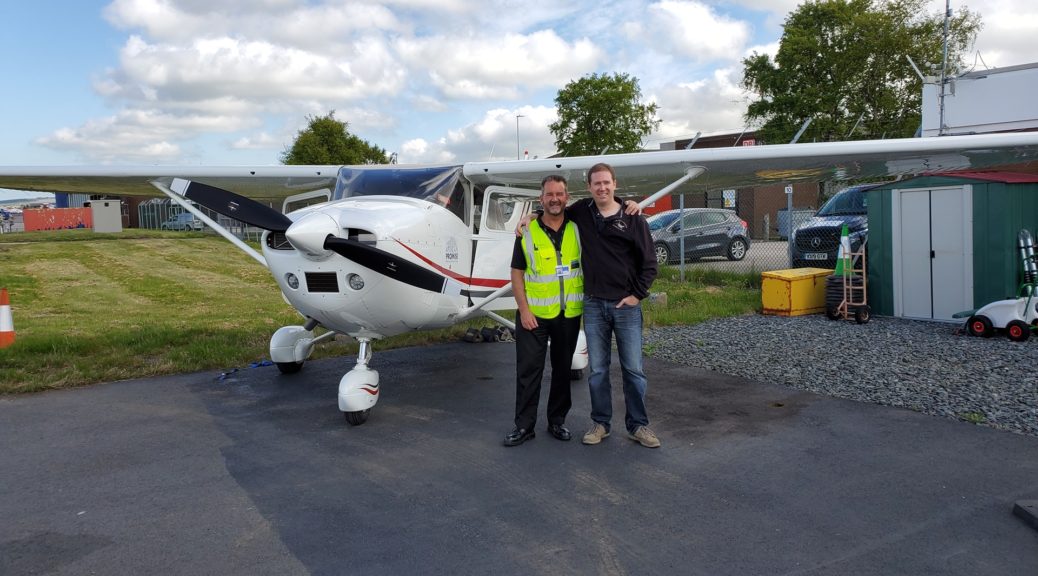 Our excellent handler from Signature 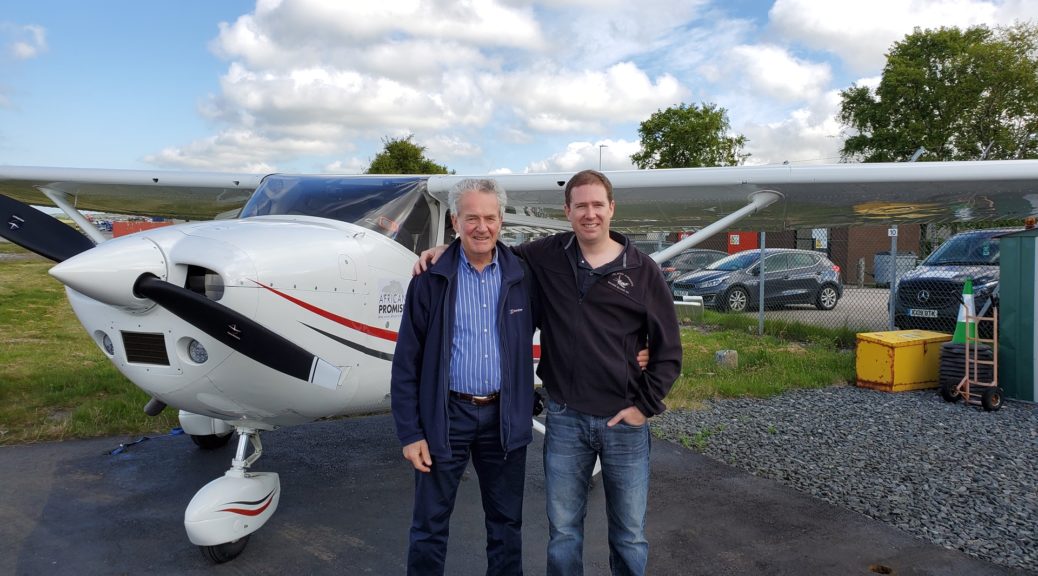 With Dad, ready to go! 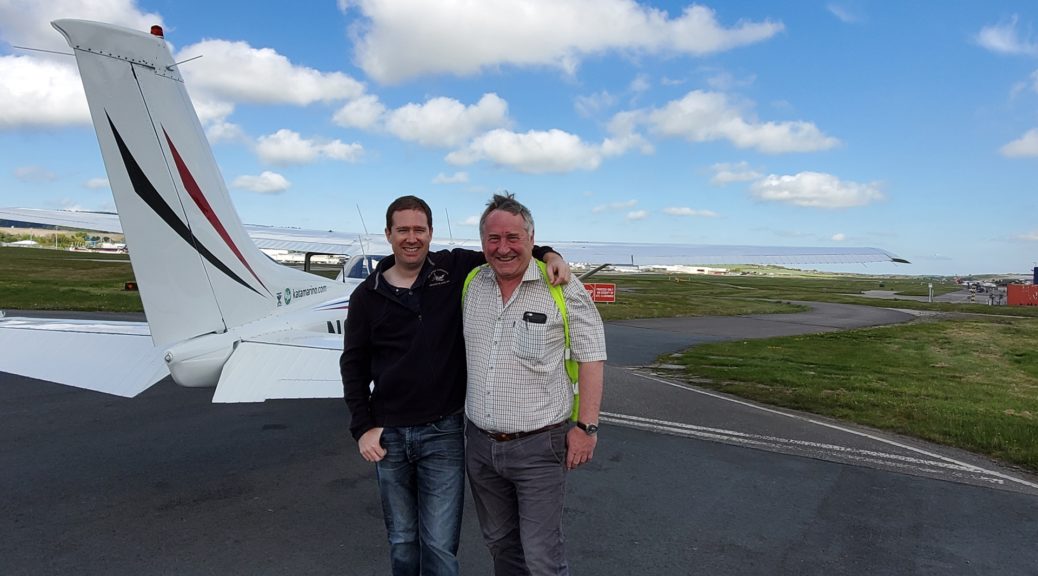 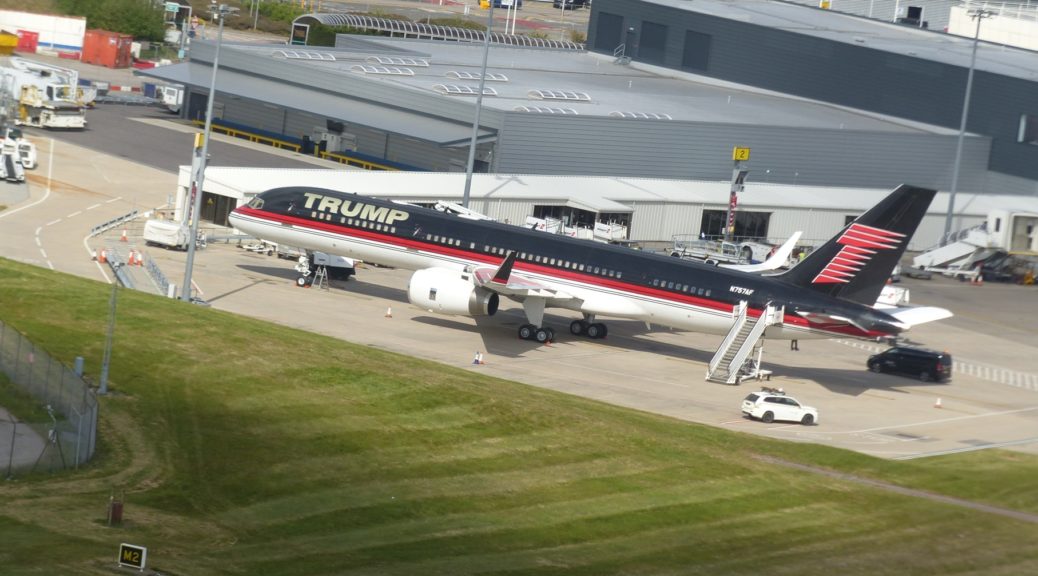 A high profile visitor at Aberdeen

Signature very generously waived a number of their fees to support the flight, and also provided me with a Signature Flight Support teddy to accompany me round the world! Just goes to show that even when the high levels of a company run it ruthlessly, the people on the ground are usually still fantastic. Everyone we met as Signature in Aberdeen was lovely. Shortly before departure, another member of the Flyer Forum showed up to say hello, which was a very pleasant surprise; photos taken and hands shaken, we headed out.

We struck out west across the highlands, before reaching Loch Ness and turning left to follow it and the other Lochs along the way to the west coast. It was a clear morning, and we had perfect views of Ben Nevis, flying a leisurely circle around the summit to take it in from all sides. We descended from Ben Nevis into Oban airport, where I conducted an embarrassingly “firm” landing, before parking up and enjoying a light lunch at the nearby Lochnell arms. The walk there and back was along a pedestrian/cycle path situated on top of an old railway embankment, much better than hugging the side of a busy A-road which is often the case when walking from airports! 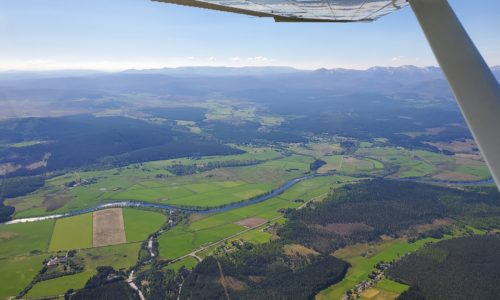 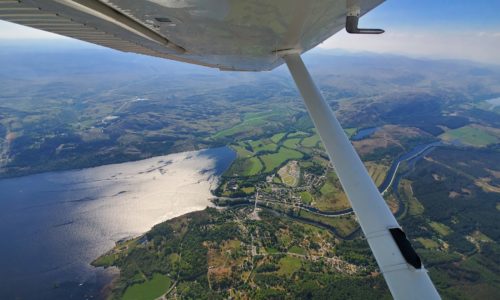 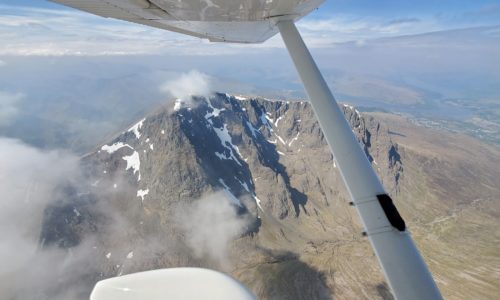 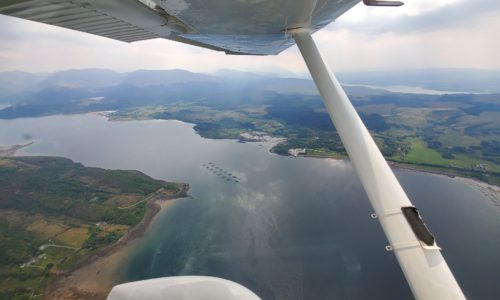 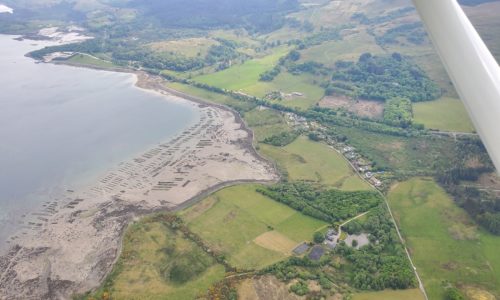 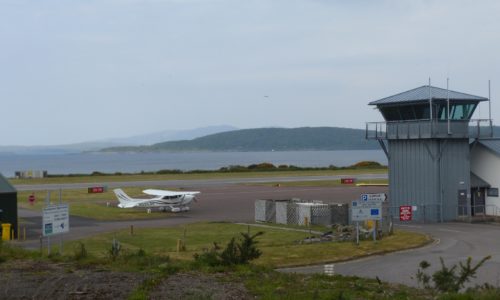 Parked up in Oban

On arriving at Oban I had called ahead to Barra airport for permission to visit, with a cautionary note not to leave it too late as “the tide’s coming in soon”. This is more important than it would be at most airports, because Barra is the only airport in the world that has commercial air service to a runway on the beach, which is submerged at high tide! We island-hopped west towards Barra, the final section being over the open sea. The second commercial flight of the day departed just ahead of our arrival, and I overflew the field to check out the conditions; there was more standing water than I’d been expecting! Luckily, another C182 was on the ground just getting ready to go; I asked him how he’d found the sand runway and he reported it was better than most concrete he’d landed on. Suitably reassured, we came in for landing on “runway” 15, with a low final approach over the tourists watching from the roadside. The surface was, as reported, excellent! 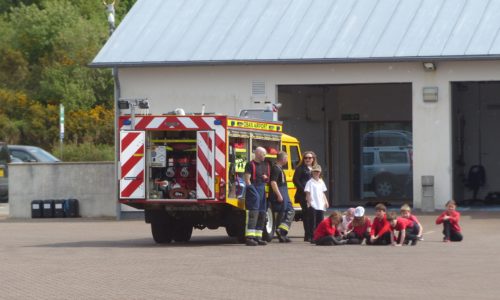 A school day out at Oban 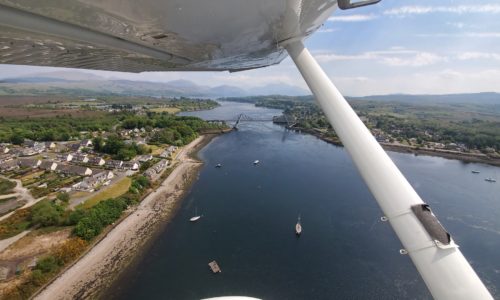 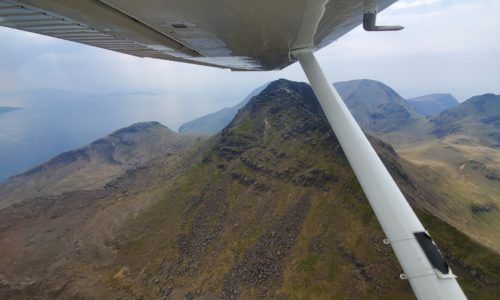 The Isle of Rum 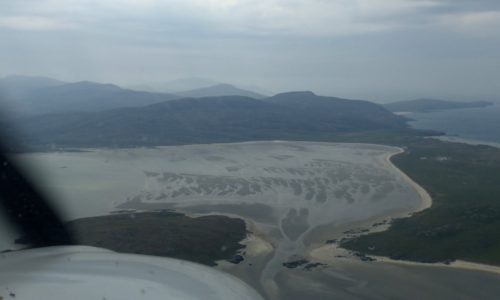 Airport ahead - looks a bit wet! 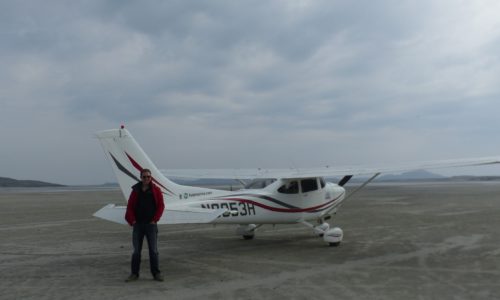 Safely down at Barra 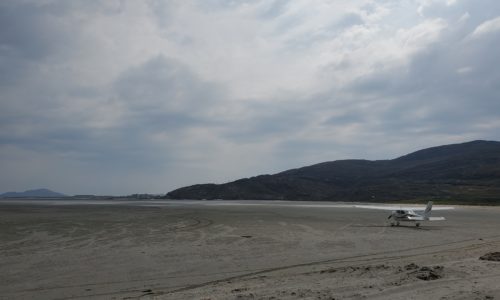 On the beach at Barra

It turns out that landing fees at Barra and nearby airports can only be paid by cash, and carry very little change, so we went to the airport cafe and enjoyed a couple of hot chocolates in order to amass some smaller coins and bills. Our entry to the cafe was slightly delayed as we were not wearing high-vis jackets; this is a particularly British airport obsession. In Barra’s case, they explained that pilots should wear these so that the airport staff knew they were authorised to be there. Not necessarily an infallible security policy…

No other traffic came or went while we were there; probably because the tide was not far from coming in! With a little more concern than usual, I cranked the engine and was happy to have it catch first time. This would not be a good airport to get stuck at, with the sea approaching rapidly. With life-jackets donned, we flew the short distance across the water to Tiree airport. It had taken a while for me to get the controller at Barra to understand where we were headed, so badly was I mispronouncing it. 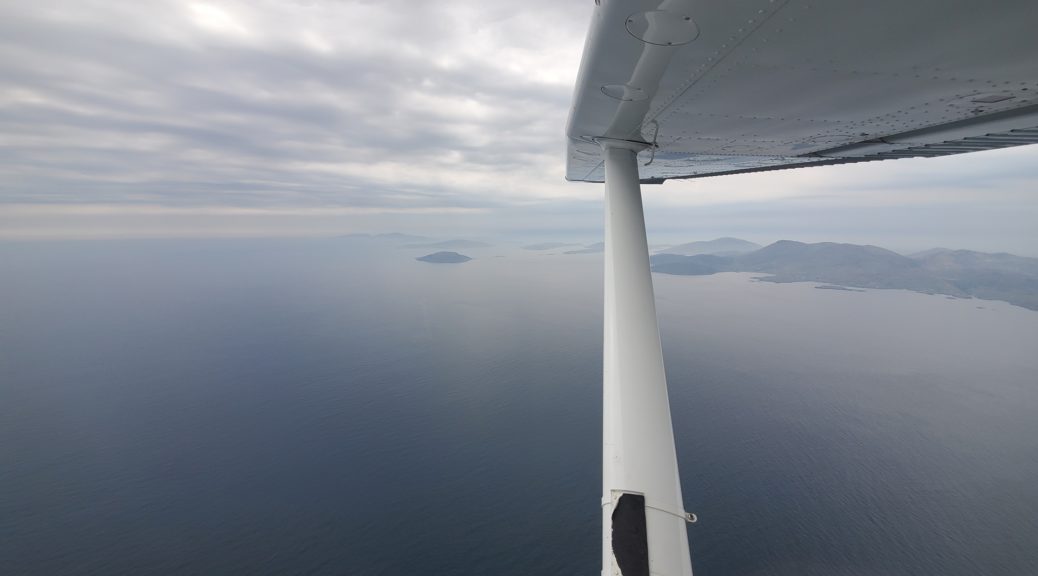 Crossing from Barra to Tiree 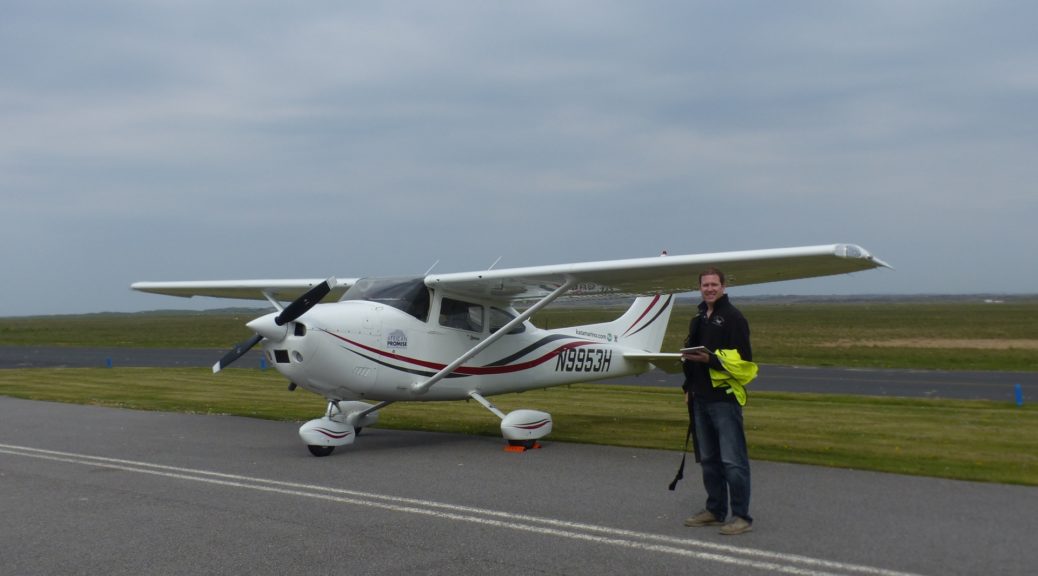 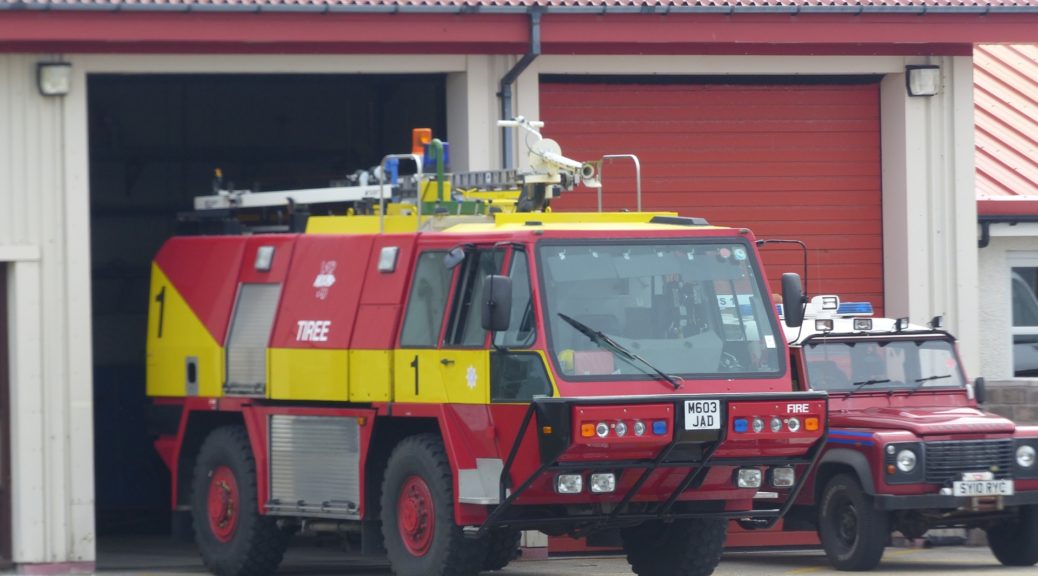 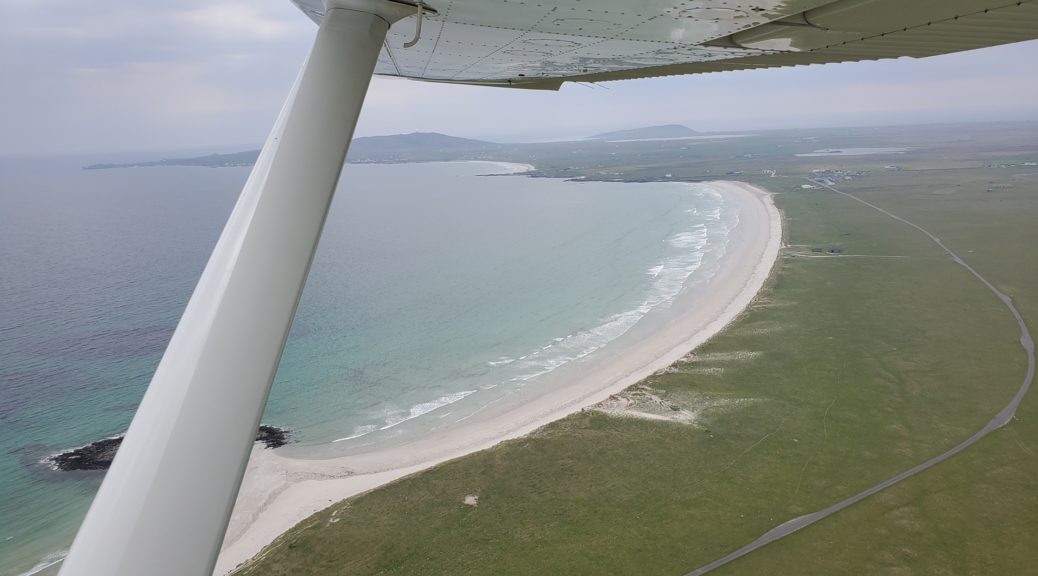 Tiree was a sleepy airport with interesting history; apparently, weather flights from here in 1944 had been responsible for the decision to delay D-Day by 24 hours to the now-famous date of June 6th. Under less pressure at Tiree, without the waves drawing nearer, we selected a destination for the night; Carlisle, in the north of England. The flight took us across the sea initially, before making landfall and being able to remove the jackets as we continued across the countryside to Carlisle. The airport has a brand new terminal, with flights due to begin imminently (after being delayed due to lack of air traffic controller availability), but general aviation is still being directed to somewhat tired and dilapidated buildings near the original WW2 control tower. The staff were friendly and helpful, however, and we were soon in a taxi to Carlisle town and the Ibis hotel. In the restaurant that night we met the lovely Kevin and Carol, who struck up a conversation from the next table. It turned out that they had a charity parachute jump lined up for the summer, and after chatting about our respective charity endeavors we ended up exchanging donations for the causes! 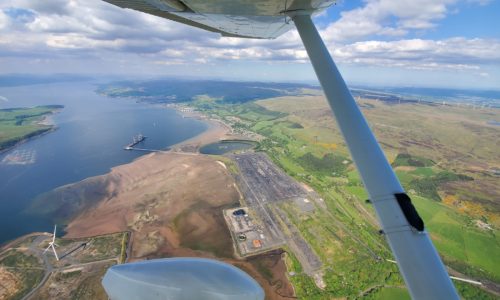 Coasting in over the north of England 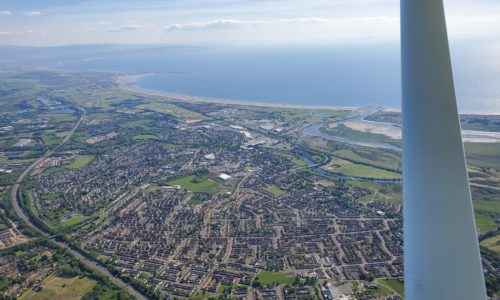 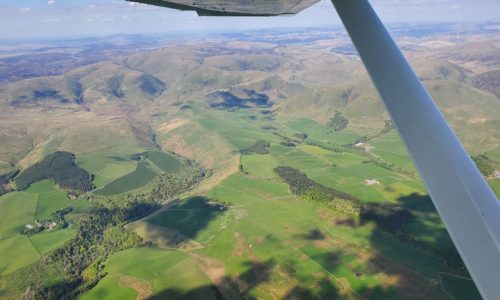