As with every day, the first action on waking up was to check out the latest weather information. Things were looking so-so, with acceptable but not great weather at the other end, and overcast layers over Goose Bay. Overall, it looked like if we could get out of Goose Bay and through the clouds without icing, we’d have a good chance of getting into Narsarsuaq. Even if conditions at Narsarsuaq deteriorated, we had the fuel to carry on to Kulusuk where weather was much better, albeit we’d be hit with the $1,000 after-hours fee! In the worst case, we even had enough fuel to return all the way back to Goose Bay. 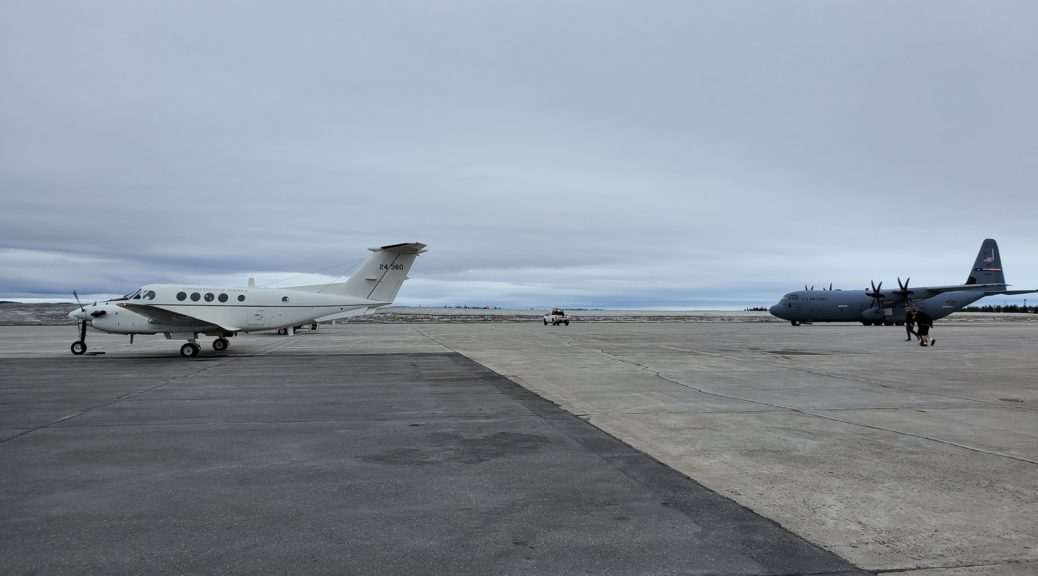 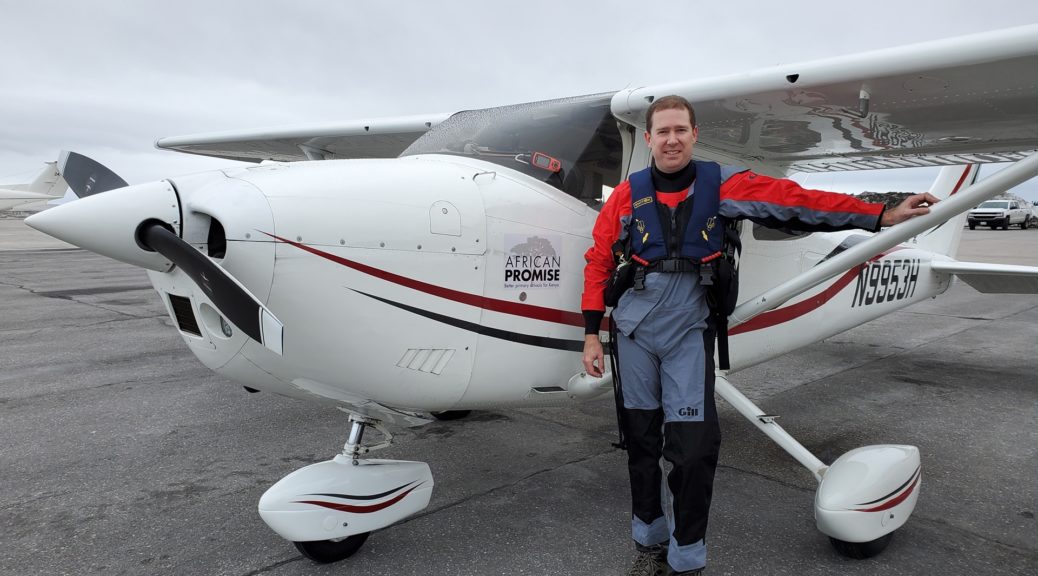 Ready for the crossing, with survival suit and unintentionally camp pose

Mike returned our Dodge Caravan (it had been the cheapest thing on offer) while I took care of the flight plan filing and final weather checks. The briefer had to put me on hold for 10 minutes while he gathered information; strange given that a lot of traffic in this part of the world is trans-Atlantic! When he did come back to me, he was thorough and helpful, and his analysis mirrored our own. Getting out of Goose Bay and up through those first clouds would be the acid test; if that wasn’t working out, we’d land and try again the next day.

We rolled down runway 23, sluggishly given our heavy fuel load, and began the climb. I’d asked for pilot reports from a couple of landing aircraft, but they had been coming from the south, and reported cloud all the way from 1,500ft to 10,000ft. In the event, we only found two thin layers to contend with in our direction, and were soon enjoying the bright sunshine at 9,500ft. The strong headwind had our ETA hovering a few minutes after closing time… 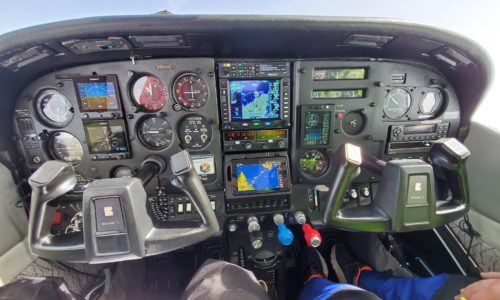 In the cruise, VFR on top 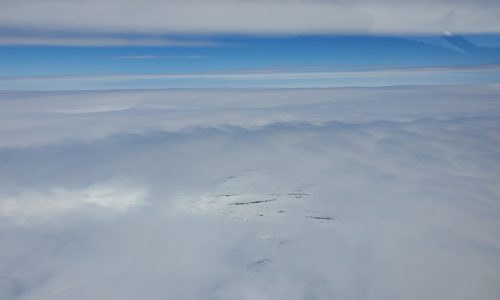 Final views of Canada before coasting out 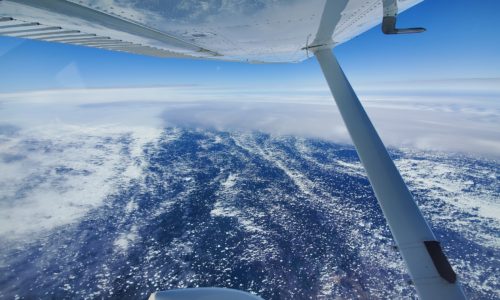 Our one view of the Labrador Sea 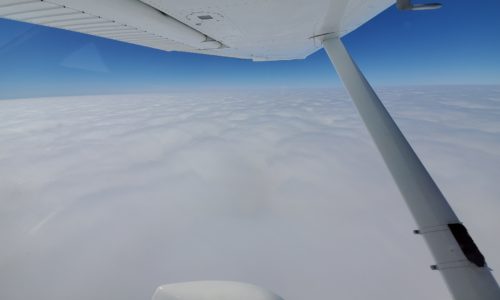 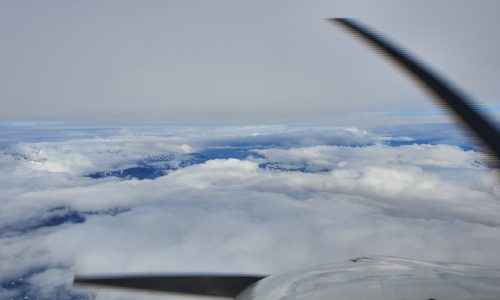 The first views of Greenland 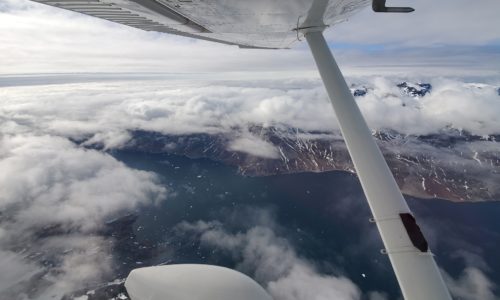 Starting the approach to Narsarsuaq

Looking at the forecast winds aloft earlier, I had noticed that the direction would swing around later in the flight, helping out our speed. I’d also seen that winds were lower at lower altitude, and before long the cloud had diminished enough that a descent was practical. Using the InReach, I confirmed with GASE and my friend Joachim that lower winds were still a better option, and down we went. It paid off; an hour was shaved off of our flight time.

Flying across these oceanic areas, ATC requests hourly check-ins to ensure that everything is going OK. We were well outside of VHF radio range for most of the crossing, so we used a couple of other methods to contact ATC. The first was to call on common radio frequencies to pass a message through airliners that were overhead; all the airliners we spoke to were happy to help! Where that didn’t work, we passed the “ops normal” message through the Garmin InReach to Eddie from GASE, who then phoned ATC to let them know that everything was proceeding to plan. 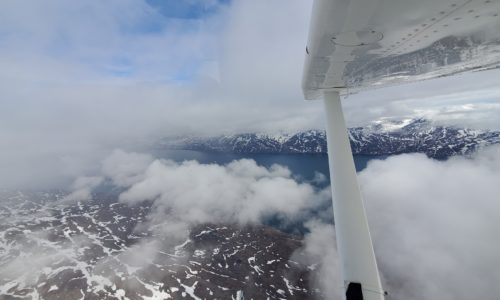 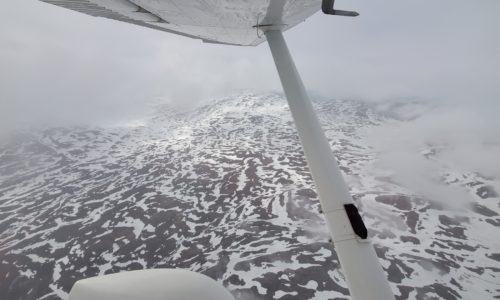 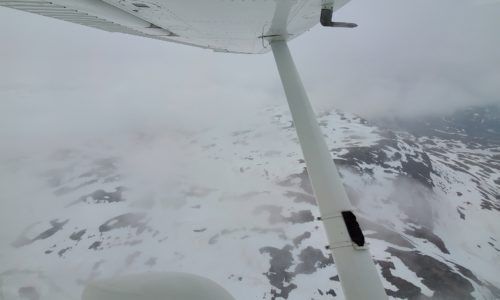 The approach had us in and out of cloud 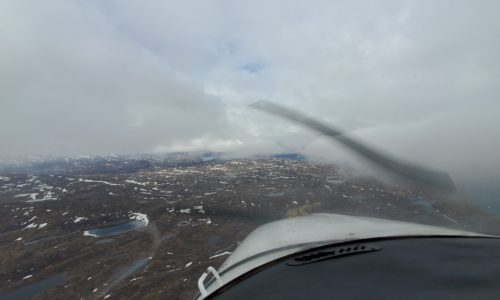 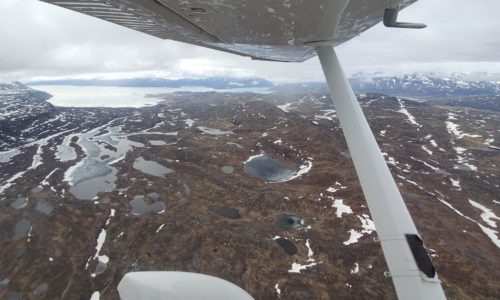 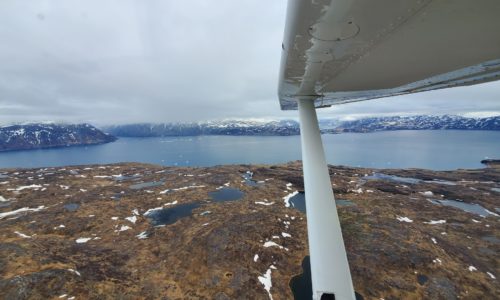 Looking across the fiord on the approach

Through the entire 6 hour flight, we only saw the cold waters of the Labrador Sea for a few short minutes half way across. It certainly concentrated the mind on the harsh and forbidding environment below, should the engine quit, despite my faith in our survival suits, life vests, and life raft. After leaving Canada, a new complication began in that the altimeter setting was now given to us in hectopascals, instead of inches of mercury. The US, as with many things, uses a different system to the rest of the world and its neighbours have ended up following suit. Through the rest of the world, though, we’d have to look up the equivalent setting in a table each time we were given a new setting, as my altimeter only shows the US scale!

Before long, the waters slipped away below cloud again, and we were beginning the climb to 9,500ft for the initial approach to Narsarsuaq. There was a single solid cloud layer reported between us and the ground, as well as a few more scattered layers, and we flew the GPS-Y approach up the fiord. The ground appeared frighteningly close at times, despite us sticking rigidly to the descent profile; the runway coming in to view ahead was a very welcome sight! 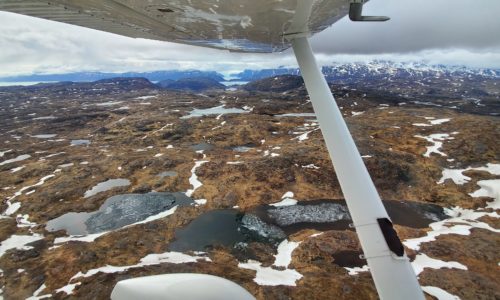 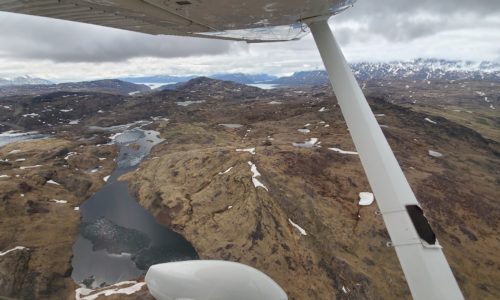 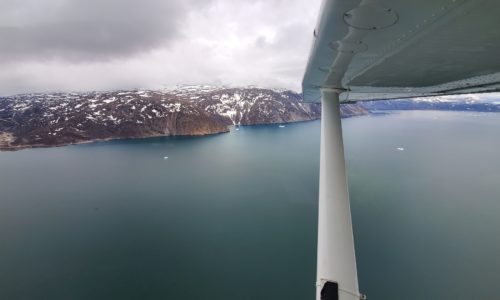 Not much ice this time of year 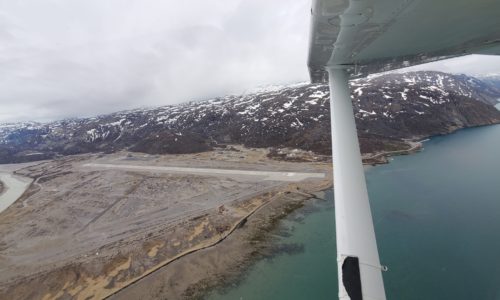 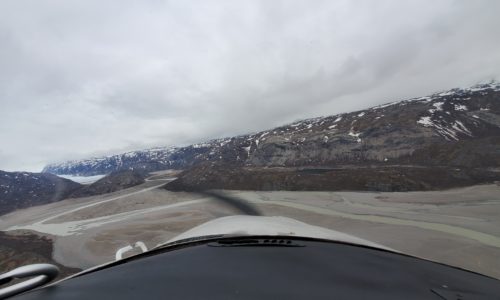 The end of downwind, with great view up the glacier 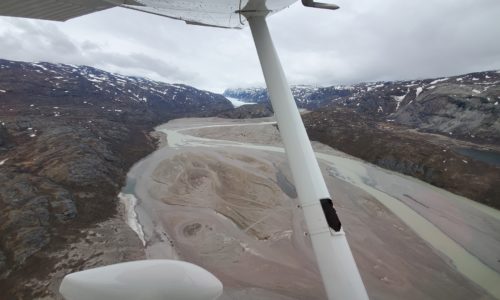 A view of the receding glacier from base turn

Everybody except the air traffic controller and the fueler, who were both excellent, had gone home by the time we arrived; this didn’t stop a mandatory and hefty “handling fee” being levied for services not rendered, of course! Narsarsuaq is not a large town and it was a short walk to the surprisingly huge Hotel Narsarsuaq. A simple twin room set us back $300; things are not cheap in this part of the world, largely due to logistics costs (and I’m sure lack of competition helps too!)

Dinner in the hotel restaurant was a lot of fun, as we met a trio of kite-skiers from Expeditions 365; they were setting out to kite-ski 2,400km north to the top of Greenland. Another group were a team on their second season of trying to locate an engine inlet cone that had fallen from an Airbus A380 over Greenland; the manufacturers were very keen to find it for analysis. It seemed like a bit of a needle-in-a-haystack situation, but they seemed confident! 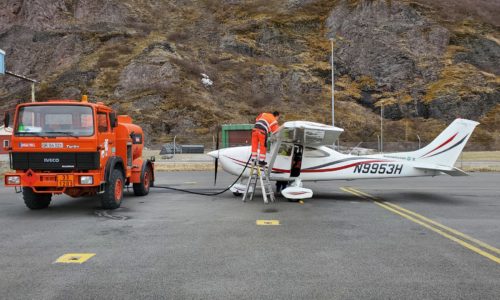 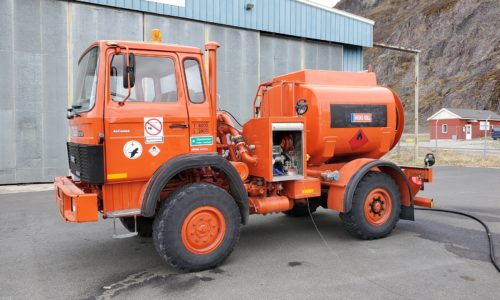 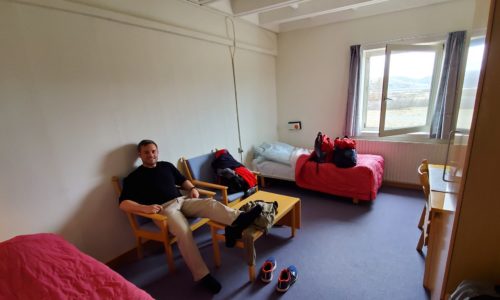 Relaxing in the $300/night Hotel Narsarsuaq

The weather for the following day looked excellent; so much so that we got cocky and booked a non-refundable hotel in Kulusuk for the following evening. The peace and quiet of that evening saw me slipping into the best nights sleep of the crossing.