The weather forecast for the dawning day was poor, and while it should be possible to fly, it was impossible to know how far we’d get. As my father’s flight home was from Atlanta in just one days time, he elected to rent a car and drive to Atlanta, so he waved us off as we took off and headed east through the low cloud and drizzle.

The weather wasn’t great, but over the low flat country it was possible to fly VFR and remain comfortably clear of cloud while remaining well above the tallest radio masts. As we flew further, the cloud closed in, and we elected to land at Enterprise, one of a chain of airfields that we had been flying over in case of this very eventuality. The airfield manager, as usual, was very friendly and offered to lend us the crew car to go into town for some food. We graciously declined, as by this point we had worked out that these cars were uninsured and the driver was obliged to have his own insurance, which we did not. On telling him as much, he was unfazed; “Don’t worry about that, none of us have insurance either!” Who were we to argue… 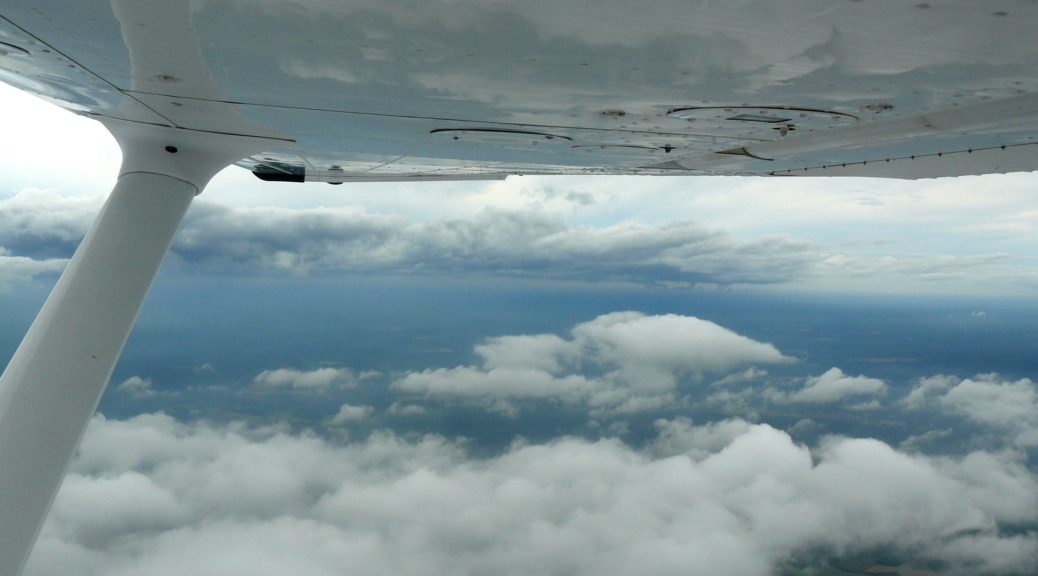 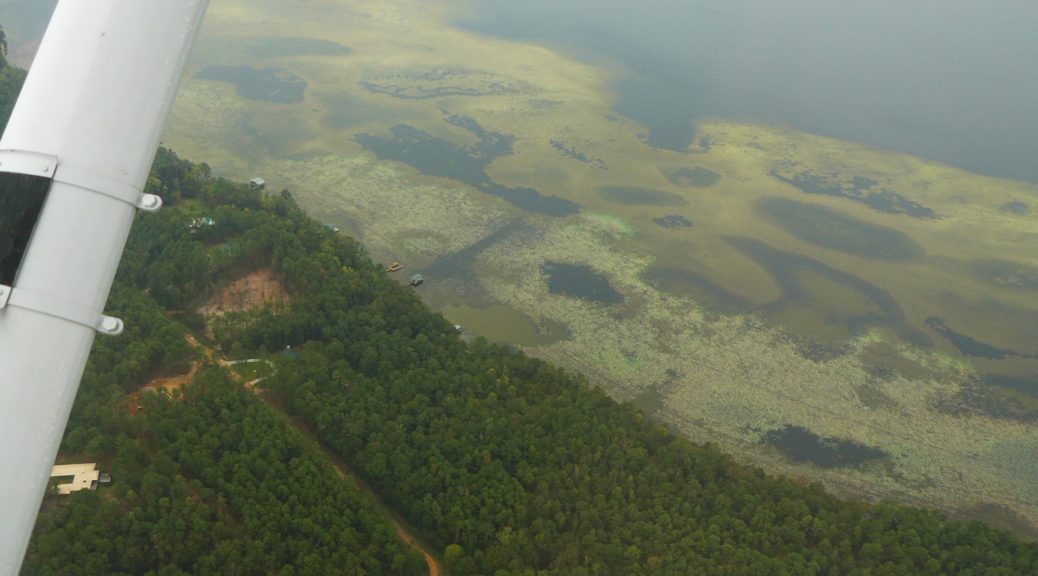 After lunch, the weather was improving, so we set out again toward Perry, Florida, to spend the night. When we landed the FBO was closed, but the lobby was open with a free phone for pilots to use. We called a local hotel who offered free pickup from the airport, and once we were comfotably settled into our room we headed down to the lobby; the hotel had only just opened and was offering free cocktails for all guests! More hotels should do this.

On our return to the airport the following day, it became clear that the local sewage plant was adjacent to the airport, and that today we were downwind. We departed rapidly, flying down to the coast towards Cedar Key, a tiny airport shoe-horned onto one of a small group of Keys on Florida’s West Coast. The airport itself was hidden from view behind trees until we were only a mile or so away, and as it came into view it became clear that this was one of the most interesting airports we’d have visited. The Key was barely big enough to contain it, with the runway thresholds only a few meters from the sea at both ends. Coming to the end of the runway, one must take care to look both ways before taxiing across the road and into the parking area; a large sign informs aircraft that the road is not, in fact, a taxiway. 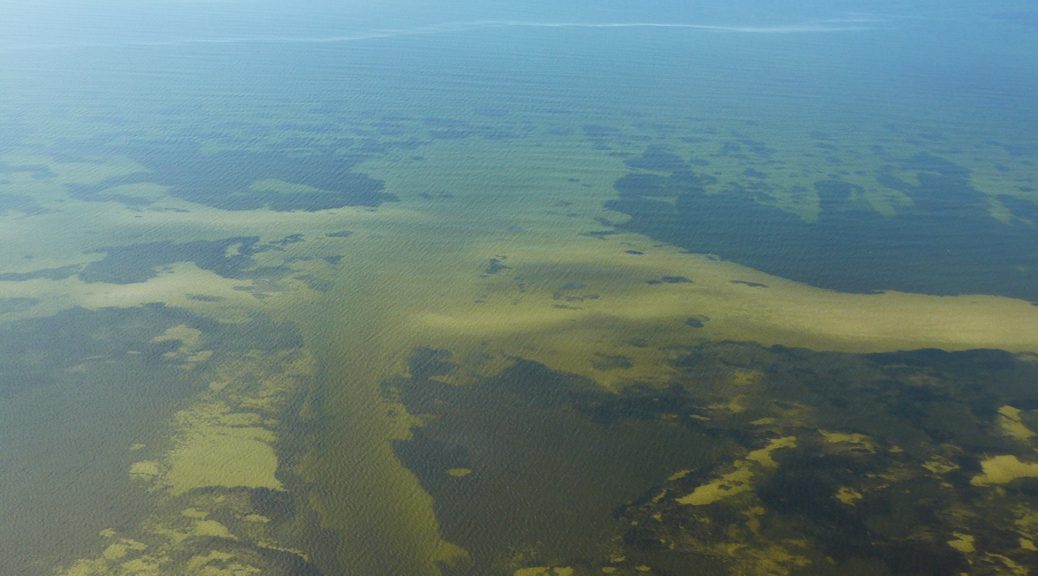 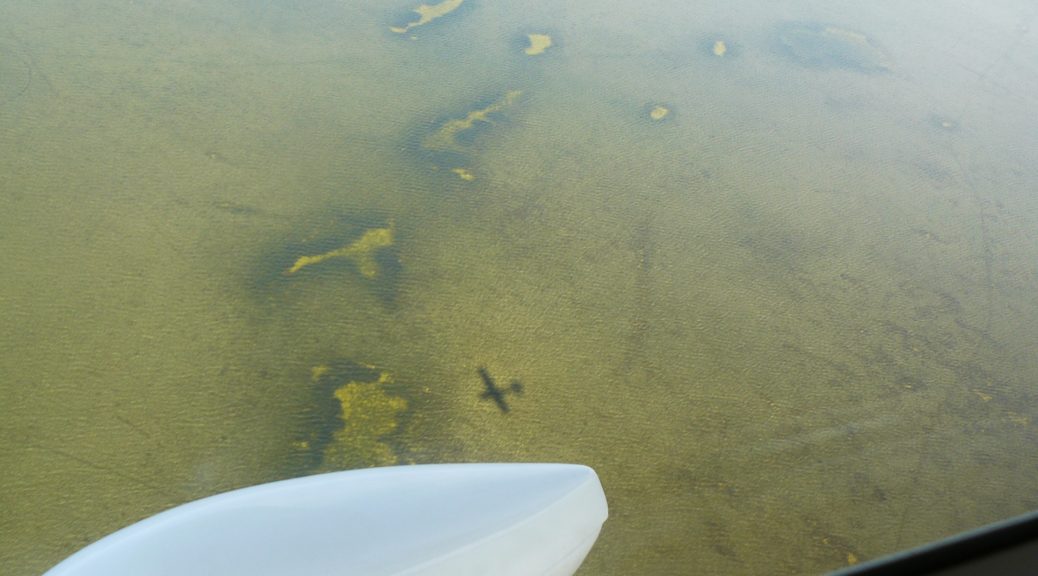 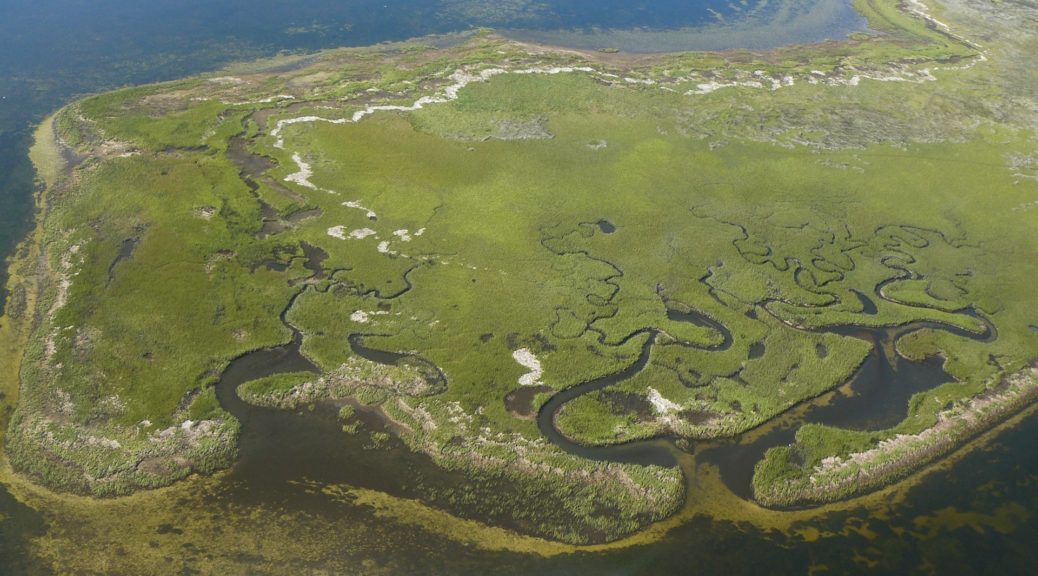 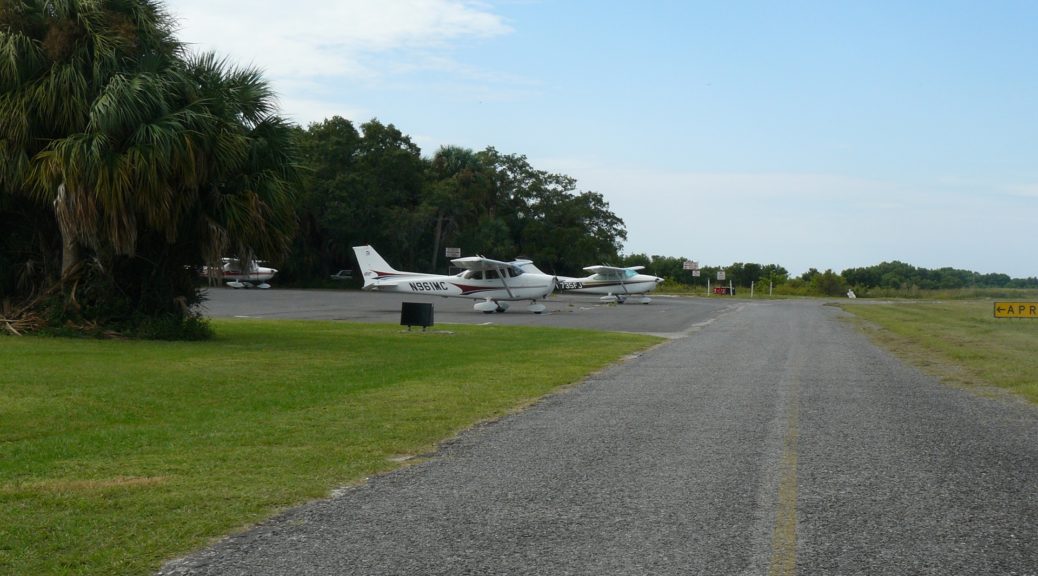 Parked up at Cedar Key

Normally, when one arrives at Cedar Key the local taxi lady will be listening in on frequency and will come to pick you up. Today was not one of those days, but we’d only been walking for a few minutes before a passing pickup stopped and offered us a lift into town. Most of the towns few restaurants are situated on the pier, and we lunched upstairs in a small bar and grill. The owner tried to get hold of the taxi lady to take us back out to the aircraft, but with no luck; a couple at the next table overheard, however, and we got chatting. They lived on Florida’s east coast and came to their holiday apartment in Cedar Key on a regular basis, and they took us back to see their place. Later on they gave us a lift out to the airfield and as a thank you I took the wife for a short flight over Cedar Key to see their place from the air. Dropping her off, and collecting Hannah, we took off again for our night stop. 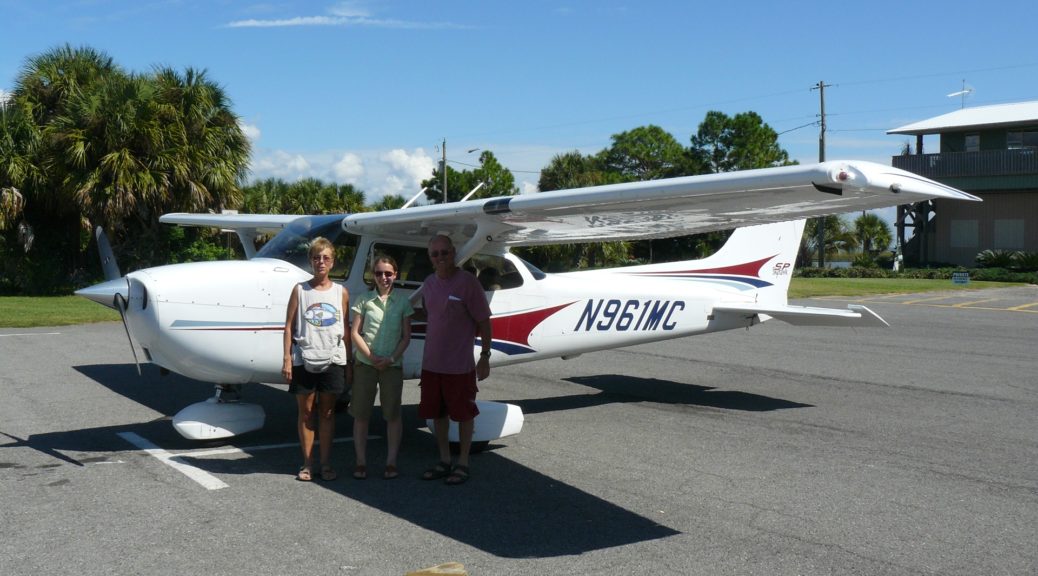 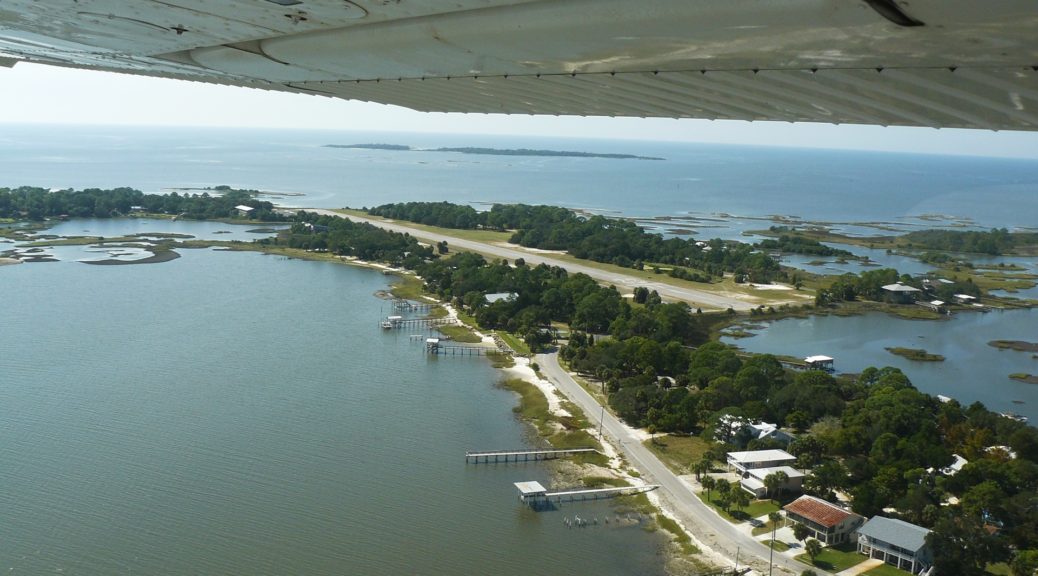 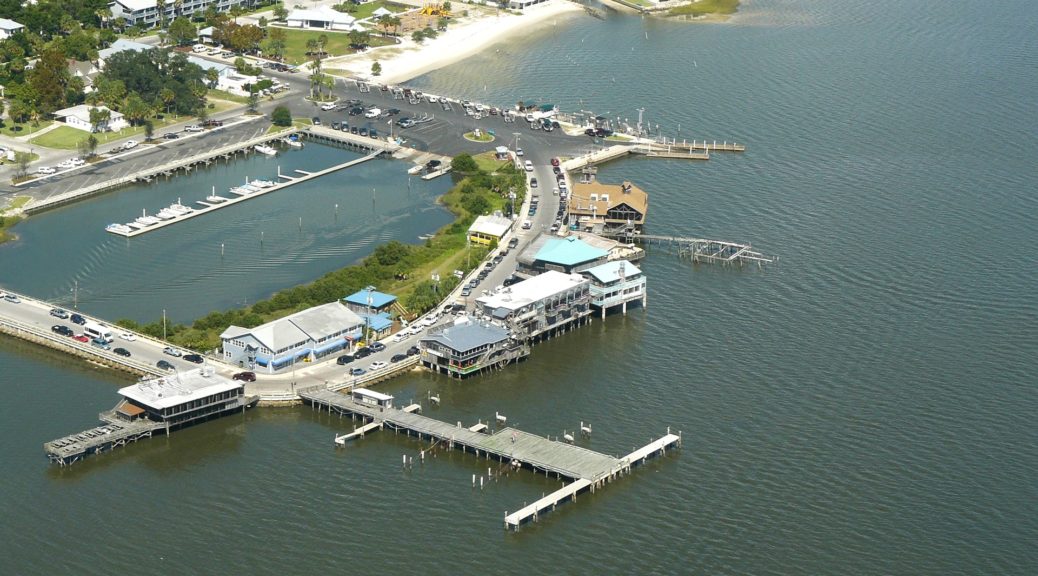 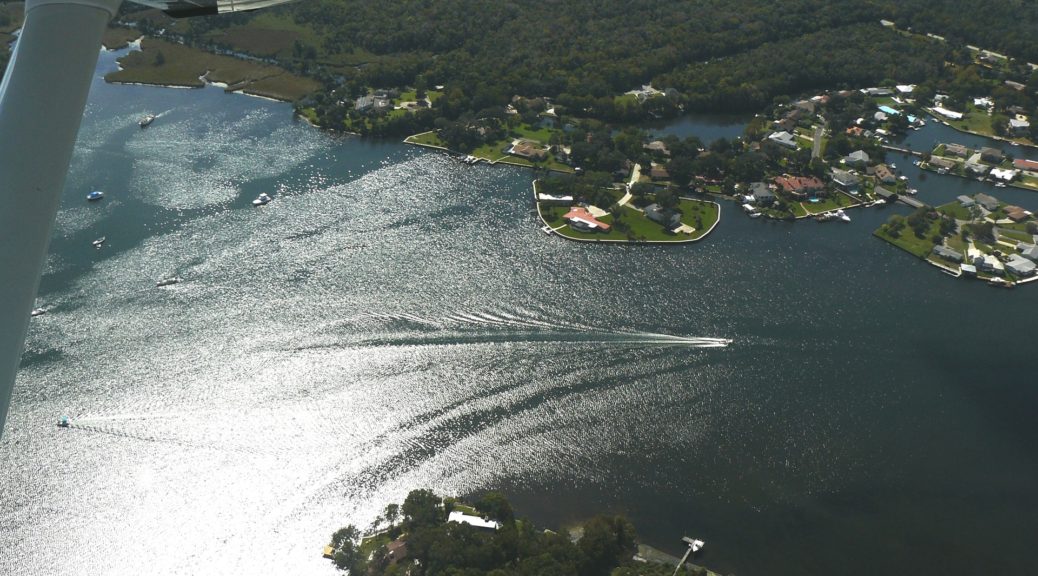 Climbing out over the Keys, we set course for Crystal River, where we were planning to spend two nights to relax before having to return the aircraft to Palm Beach. The flight was very short, and we flew in over the bay and our hotel before landing. Another aircraft was on final approach behind us, so I stood on the brakes to ensure that we could turn off the runway before he had to go around. He landed just as we had vacated, and quipped over the radio that he’d help pay for the new brakes. As we tied the aircraft down, I managed to trip over the steel tiedown wires and hurt my foot; it was good that we were staying here for a couple of days, as it would take me that long to stop limping! We called the resort we had booked the night before, and minutes later one of their staff showed up to collect us and take us to the hotel.

It felt strange to be so close to the end of our trip. We spent a day off at the resort, including a few hours renting a small motorboat and pottering around the bay attempting to find a manatee. We didn’t see one up close, but spotted a few surface disturbances from a distance that certainly had all the hallmarks of the sea-cow! 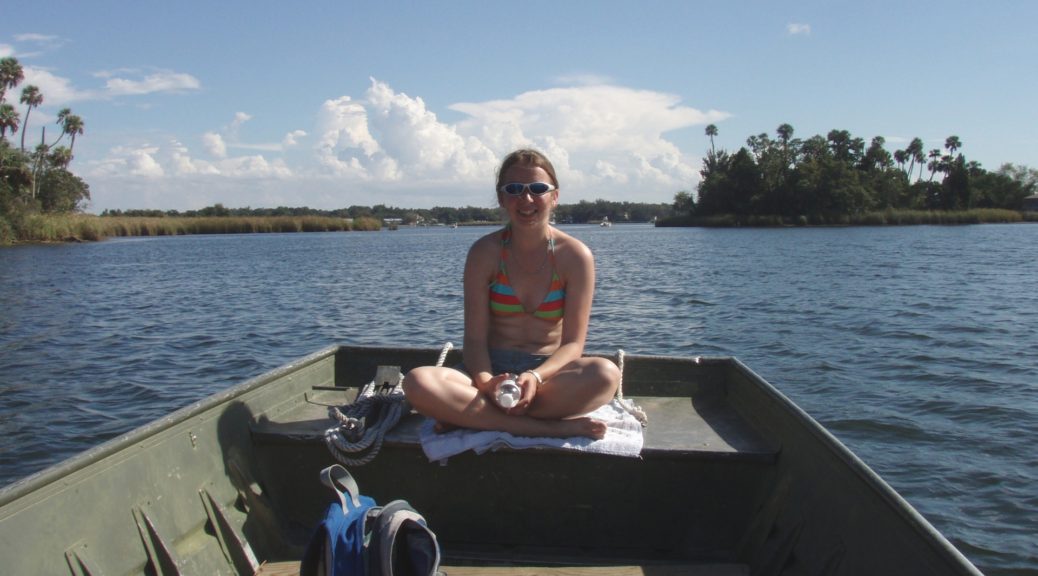 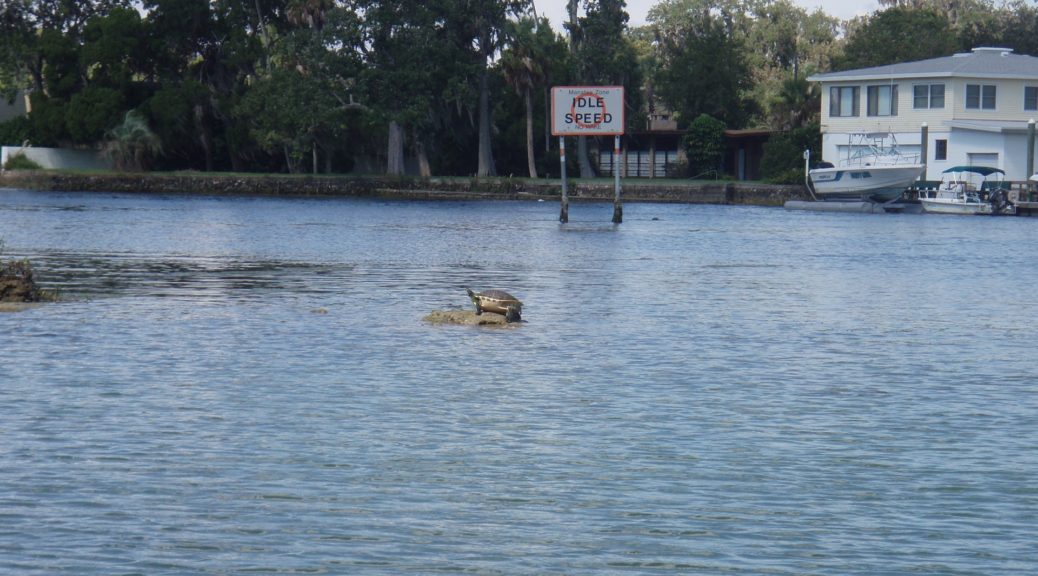 After 5 weeks, the final day dawned. The land was covered in a low mist which the early morning sun had yet to burn off. We were departing early because our first stop was Sarasota once again. My Aunt and Uncle were now staying in the Florida house and we were meeting them for breakfast, and to drop off a bag of gear that we no longer needed that they’d agreed to take back to the UK for us. We had brunch at a restaurant in Sarasota town center; pancakes are always a good way to celebrate the end of an adventure! 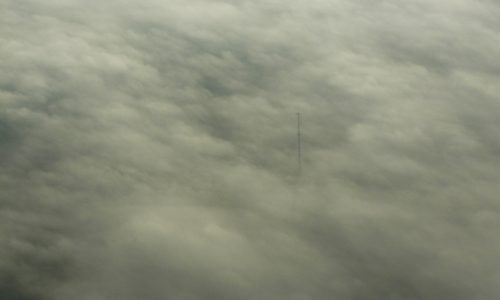 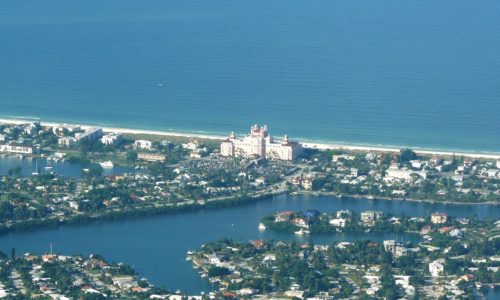 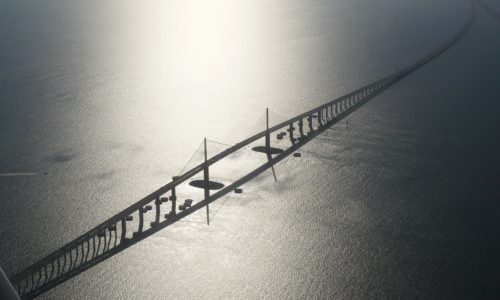 We took off again around mid-day, and picked our way around heavy rain showers that were beginning to build up inland. It was a short flight, and we arrived at Lantana Airport in the tail end of a rain shower and landed in drizzle. We shut down and waited for the rain to end before taking our gear to the rental car, and saying goodbye to Mike-Charlie. 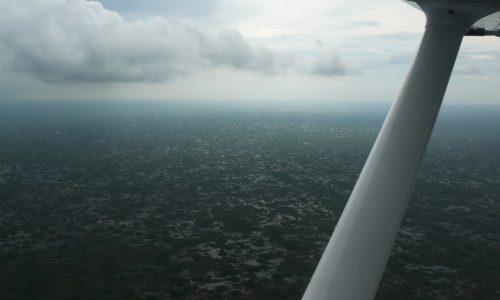 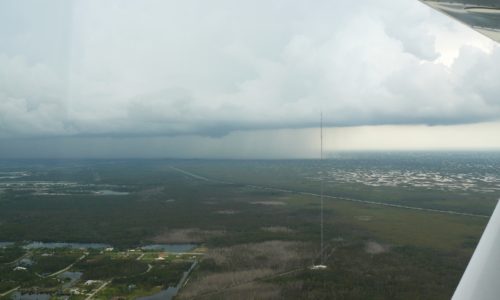 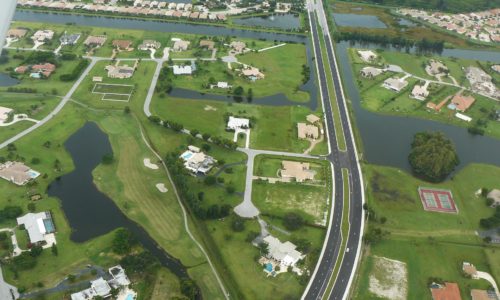 From here, we spent a few days in Orlando. It was quite a culture shock to go from remote, small-town America to huge shopping Malls full of Mancunians wearing football shirts. We had been on the wing for 5 weeks, and had flown 70.1 hours. Not bad compared to my prediction of 70 before the trip began! From here we boarded a plane and flew to Los Angeles, covering the distance that had taken two weeks in Mike-Charlie in only a few hours. After a short stopever, it was time to fly again; to Auckland, and another two months of adventures; while there would be some flying, most of the trip this time would be overland! 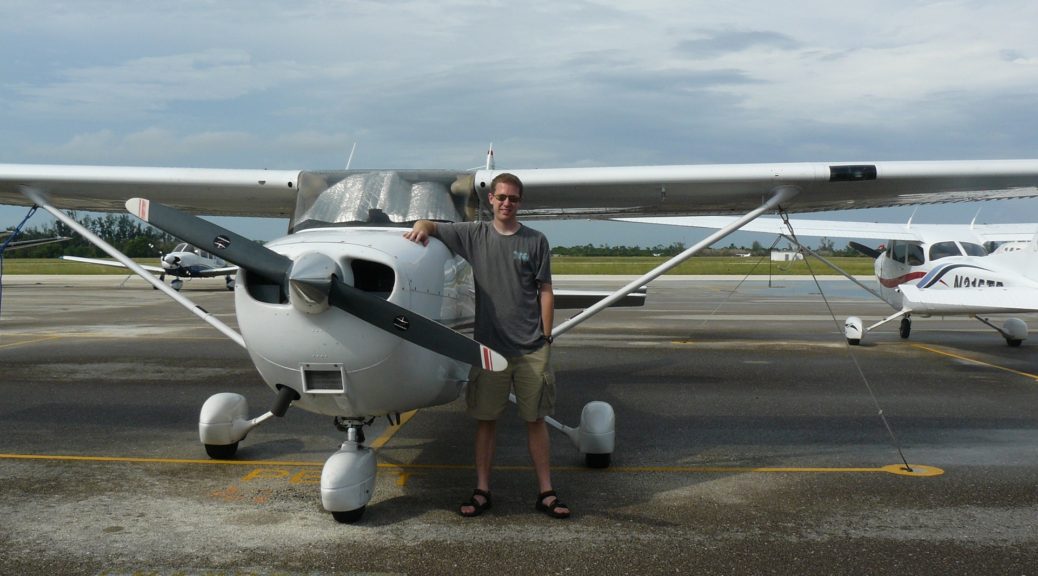 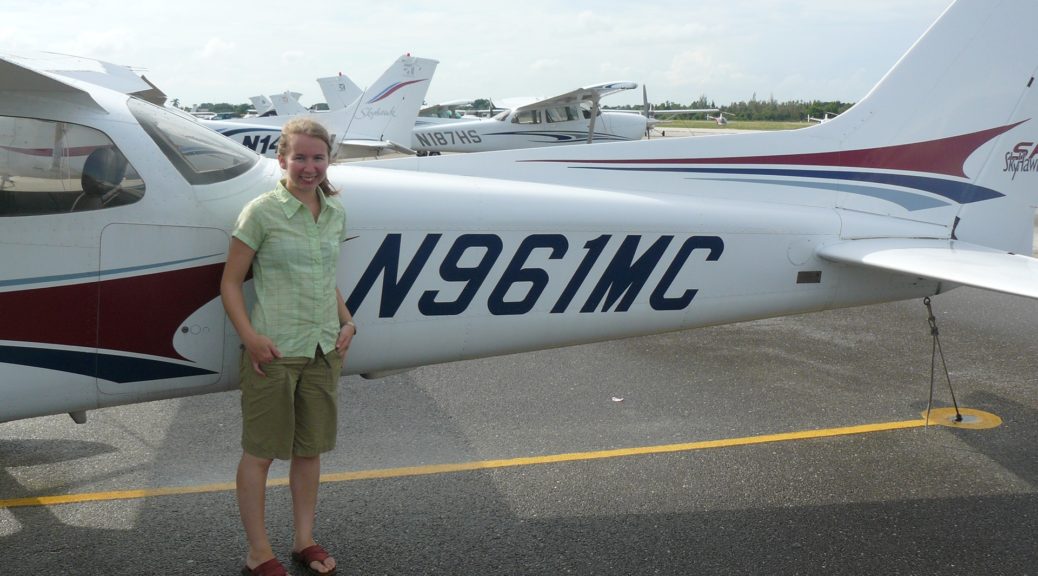 One thought on “USA Coast to Coast – Back to Florida”